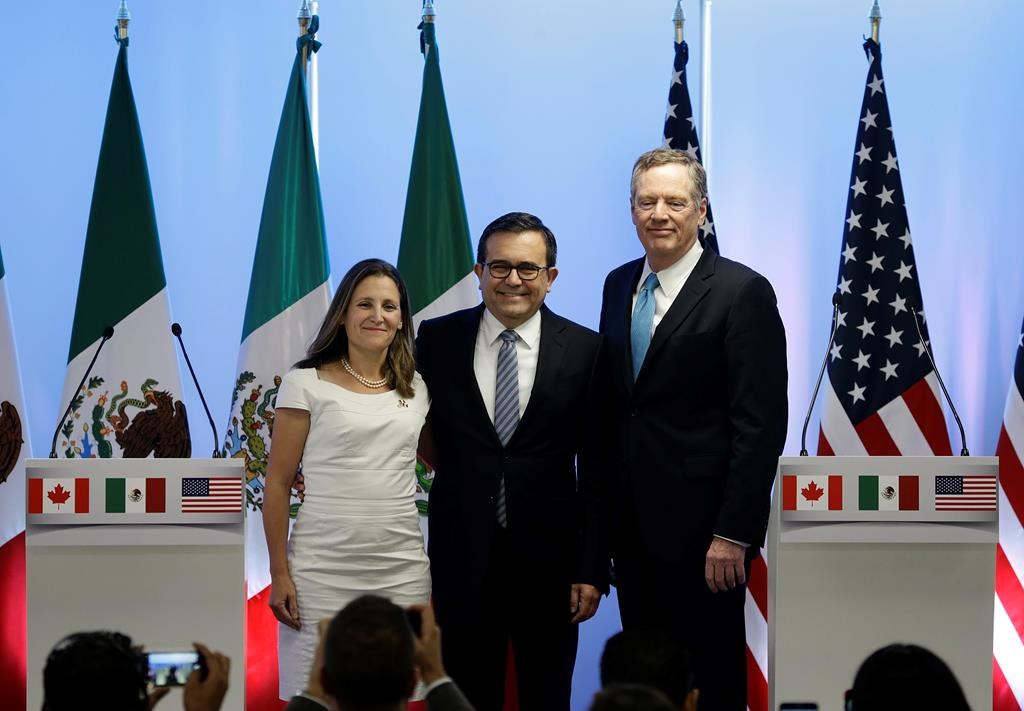 The Trudeau government is being urged to stop keeping the House of Commons in the dark about the confidential background documents it's using to renegotiate NAFTA.

The Opposition Conservative Party's trade critic says that the government should share the secret North American Free Trade Agreement (NAFTA) negotiating documents with MPs, even if it means asking the federal politicians to keep the files confidential.

Niagara West MP Dean Allison told National Observer he plans to raise the issue when the Commons returns next week. If people outside government who are involved in the consultation process can be privy to NAFTA documents, Allison suggests parliamentarians should be too.

NAFTA underpins a three-way trading relationship with Mexico and the United States worth hundreds of billions of dollars a year, yet faces an uncertain future as U.S. President Donald Trump continues to label it the "worst trade deal ever made."

Millions of Canadian jobs are at stake as the three countries prepare to enter the third round of renegotiations this month on the 23-year-old deal. Labour and environmental standards, along with corporate sector profits, could also be on the line, depending on where the talks lead.

“It’s always helpful if Parliament has a chance to look at any potential contentious issues coming up, even if it is done in camera,” said Allison, referring to closed-door meetings. “That will certainly be an issue I’ll raise, in terms of [whether] there’s an opportunity for us to have a look at what’s going on.”

Opposition members have been clamouring for more information about what Canada is bringing to the table as it hammers out a new NAFTA deal with its two trading partners.

During an August trade committee meeting, Tracey Ramsey, the NDP's trade critic, asked Canada’s chief negotiator, Steve Verheul, whether he would table “an explanatory memorandum” after talks wrapped up to inform parliamentarians of what the deal's implementing legislation will look like.

Verheul said yes. But in a separate interview, Ramsey said she'll consider Allison’s proposal. “I would have to look at it before I could say whether or not I would support it,” she said.

Allison, who expects to be a new addition to the trade committee, says he’s interested in taking advantage of this ability of negotiators to circulate documents to non-government individuals.

“If stakeholders are a part of it, I would also hope that parliamentarians would be a part of it as well,” he said.

After initially revealing their opening position on topics like climate change, Indigenous and gender issues, Foreign Affairs Minister Chrystia Freeland and Environment Minister Catherine McKenna have been mostly tight-lipped about the substance of the talks.

Both say climate change should be part of a new NAFTA, for example, but so far both have stopped short of publicly saying whether it's a deal breaker, something the NDP wants to see.

Verheul was also cautious in what he said during the August committee appearance. “In this day and age, it's hard to imagine that an environment chapter is not going to have some reference to climate change,” he said.

The Tories, meanwhile, have downplayed the central importance of negotiating for environmental standards, something McKenna has pushed back on. The environment was already the scheduled topic for 14 hours' worth of NAFTA talks in Mexico City, according to The Canadian Press, which has also reported sticking points over issues like visas and Canada’s system of supply management for dairy, poultry and eggs.

Prime Minister Justin Trudeau's office did not provide a response to a request for comment on Allison's proposal. Trudeau's office sent questions to Freeland's press secretary Adam Austen, who did not respond to questions before publication.

U.S. law requires trade negotiators to share documents with Congressional committee members on an ongoing basis. In Canada, government policy requires a period of at least 21 sitting days between when treaties are tabled and when legal steps are taken to bring it into force.

Last November, Ramsey argued that the Liberals broke that policy when they tabled Canada’s trade deal with the European Union. The Liberals said at the time that they considered it a matter of policy and not parliamentary procedure.

As a result, Ramsey said she didn’t have much confidence that the government would follow through on the 21-day policy with NAFTA, and so she understood why Allison would be making such a proposal.

Allison said he was sympathetic to the notion that governments should be able to carry out trade talks without having to negotiate in the public sphere. He said he also realized that sharing information with members of Parliament runs the risk of more information leaking to the press.

“I have no problem with the concept of confidentiality, and the fact that governments shouldn’t be allowed to leak,” said Allison. “But it would be helpful [to reveal documents to parliamentarians] so we can offer comments as to whether we think things are moving in the right direction.”

The opposition push for more documents comes as a coalition of groups such as the Samuelson-Glushko Canadian Internet Policy and Public Interest Clinic at the University of Ottawa, continue to demand even greater transparency in NAFTA talks.

"It is unacceptable that binding rules are created in a forum that is inaccessible and often hostile to input from members of the public," said an open letter signed by the public interest clinic and dozens of other organizations in all three countries in mid-August.

The government has made a point of publicly demonstrating its willingness to engage with outsiders by opening public consultations online. Freeland and McKenna have also both set up NAFTA advisory councils, publicly disclosing the members.

There are also advisory groups that Verheul, Canada’s chief negotiator, and his team are using that haven’t been publicly announced, according to former diplomat Colin Robertson. He worked on Canada’s negotiating team during the original Canada-U.S. Free Trade Agreement talks, and is now in contact with government about the current negotiations.

“You do want to have feedback throughout the negotiations,” said Robertson. “Essentially we’re negotiating on behalf of those who will use it, and the users are going to be business. There are other interest groups, particularly when you get to labour and the environment...you want to be sure that what you’re doing is actually going to have practical applications.”

But this public and private approach is not good enough, the group behind the open letter argued. They’re asking governments to release “​consolidated​ ​versions​ ​of​ ​negotiating​ ​texts​” between​ ​negotiating​ ​rounds, as well as the ​​locations​ ​and​ ​times​ ​of​ ​key​ ​meetings ahead of schedule.

David Fewer, director of the University of Ottawa clinic that's part of the open letter, said there was a reason the Commons is famously open to the public.

“When we do substantive lawmaking under the rubric of a trade negotiation, it’s a fundamental challenge to our democracy, and it’s problematic,” said Fewer.

“If you don’t have a mechanism whereby substantive laws are debated, and a variety of interests are accommodated in the legislation, then you’re not going to have legislation that reflects the public interest, as all legislation must.”

National Observer asked Freeland's office for a list, including membership, of all committees, councils, bodies or otherwise that currently contain people covered under the confidentiality agreement’s exception for "non-government" individuals.

Freeland’s press secretary Austen said those questions would be handled by Global Affairs Canada, the country’s foreign affairs department. Representatives from the department did not respond to questions before publication.

Oonagh Fitzgerald, director of the international law research program at the Centre for International Governance Innovation, said how democratic the process is will depend on how willing the governments of each country are to hearing from a diverse group of stakeholders.

“You can see why they’d want to have a certain bit of confidentiality, so that they can take forward the positions that they have concluded are the right positions to be putting forward on behalf of Canada, and that haven’t been sideswiped by debate,” she said.

But if issues are “obviously of great public interest,” she added, “it would be in the government's best interest to make sure they’re getting a full range of views.”

Canada, Mexico and the United States wrapped up their second round of NAFTA negotiations on Sept. 5 in Mexico City. The third round of talks begins in Ottawa starting Sept. 23.

Trudeau targets Tories in gender equality remarks, saying they don't get it

The story of NAFTA, as told from a Canadian auto plant in Mexico

Conservatives are quite right

Conservatives are quite right about this. Also hypocritical, since they themselves were secretive as all get out when it came to trade negotiations. For the same reasons--modern trade agreements are generally plots by certain moneyed interests of all countries involved to pick the rest of our pockets, and nobody wants us ordinary folks to find out about it. They don't really want the info--they just know there's no danger of the Liberals actually handing it over, so they can safely look good.
But really the public has a right to know about this stuff, inconvenient for the negotiators though that may be.