Is B.C. headed for another devastating summer of wildfires?

By Tracy Sherlock | Analysis, Politics | May 9th 2018
#9 of 115 articles from the Special Report: Wildfires
More than $568 million was spent in B.C. fighting wildfires last summer. Photo by Becka Rosette.
Previous story
Next story

With warm weather, a high snowpack and floodwaters rising throughout the province, it may seem like B.C. is set to repeat last year’s weather patterns, which led to a catastrophic summer of fires.

But it’s still too early to reliably predict the wildfire forecast, even though there are already 45 active fires burning in B.C. and a few of those burned all winter.

Last summer, the province was in a state of emergency for 10 weeks, about 65,000 people were forced from their homes, more than 190 houses were destroyed and the province was blanketed with thick smoke. More than $568 million was spent trying to control more than 1,346 fires that covered 1.2 million hectares.

And it could get worse — wildfires are likely to increase in intensity and frequency, due to climate change, a report by Canadian Wildland Fire Strategy says.

The results of a $900,000 investigation into last year’s fires and floods, led by former Liberal cabinet minister George Abbott and First Nations Chief Maureen Chapman, are expected very soon. That report could shape forest management into the future, although a similar report in 2003 was never fully implemented.

First of all, it’s not that unusual to see very large fires burn all winter and the number of spring fires isn’t really an indication of the severity of a summer fire season, Turcot said.

In early May last year, there were just 19 fires burning, but in 2016, there were 74. Despite those early numbers, 2017 was the most severe fire season ever experienced in B.C., while 2016 was below average.

Two of the biggest wildfire drivers — lightning and rain — are beyond the scope of human control, but the BC Wildfire Service is still taking steps to prevent another firestorm like last year.

One of the most significant lessons learned in 2017 was the importance of relationships between the wildfire service and other organizations like local governments, regional districts and First Nations, Turcot said.

Wildfires are likely to increase in intensity and frequency, due to climate change, a report by Canadian Wildland Fire Strategy says. @TracySherlock #bcpoli @GeorgeHeyman

BC Wildfire is working on strengthening those ties, Turcot said.

In April, the federal government, the B.C. government and the Tsilhqot’in Nation announced a new agreement to collaborate during emergencies. Last summer, Tl'etinqox First Nation Chief Joe Alphonse and his community refused to leave, becoming the first Canadian First Nation to say no to an evacuation order.

The community had its own firefighters and Alphonse told National Observer they were prepared to look after themselves. Now, they have formalized an agreement with the federal and provincial governments to do just that — the first agreement of its kind in Canada.

“We had the years of preparation, the expertise, the machinery, the fire crews and the resources to stand and fight. We protected our community from encroaching wildfire while provincial and federal resources were stretched too thin,” Alphonse said in a news release. “Emergency situations are only going to increase in a time of climate change. This tripartite emergency agreement is just a start to working together as governments and preparing for future emergency situations.”

Jane Philpott, Canada’s minister of Indigenous services, said the agreement could provide best practices and practical solutions for agreements with other First Nations.

Last fall, the provincial government committed $140 million to prevent future fires by cleaning out fuels like dead trees and smaller live trees. In April, the government announced another $134 million for the Forest Enhancement Society of B.C., to be spent on 71 projects around the province. About $99 million of that money will be spent in the Cariboo region and about one-third of the work will involve or be led by First Nations, the government said.

But those efforts may be a drop in the bucket of what’s needed. Lori Daniels, a forest ecology professor at the University of British Columbia, estimated last year that it would take about $3.5 billion to protect the highest-risk areas of the province in years to come. 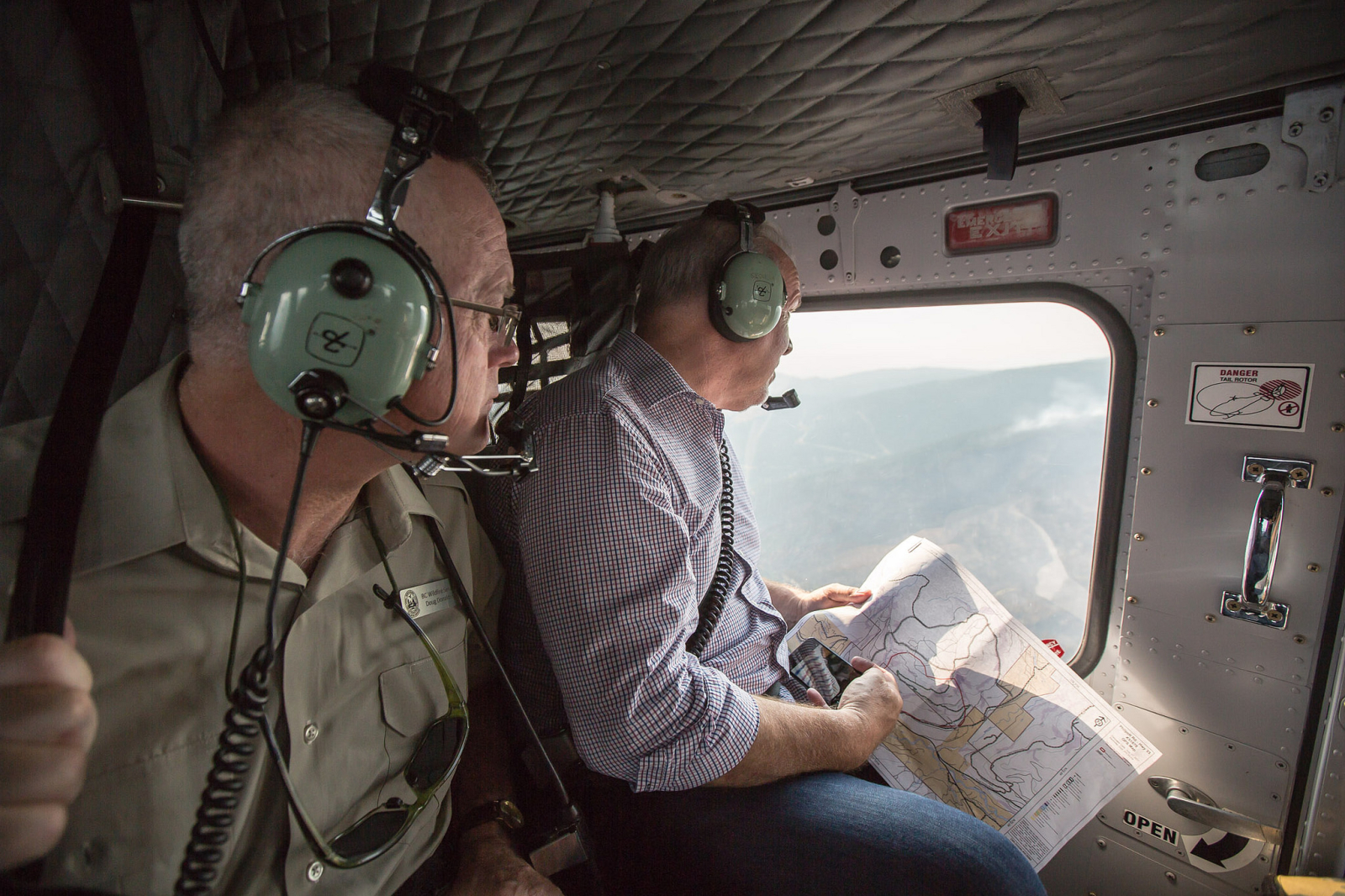 Wildfire service urges people and communities to be fire smart

This spring, the wildfire service has been conducting prescribed burns in high-risk areas, in an attempt to reduce the amount of fuel available for fires, Turcot said.

There’s also a push to encourage people to fireproof their properties and communities, a strategy that includes moving combustible material away from the house, planting fire-resistant plants and renovating with fire-resistant materials.

“That’s something we are really trying to drive home right now,” Turcot said. “It’s something we promote every year, but I think if you look at a fire season like the one we saw last year and it really highlights the importance of fire smarting your property.”

BC Wildfire Service has more of its seasonal staff working earlier in the spring and has contracted with more 128 firefighters who will be on standby all summer.

By July, they plan to buy a mass water delivery system that uses similar technology to oil and gas fracking. It delivers a massive amount of water and would only be used in very large scale fires, Turcot said.

Fire activity is closely related to the weather, which is tough to accurately forecast.

“There are some basic trends that we are aware of. Weather models are starting to indicate this summer will be a little bit warmer than average,” Turcot said.

The real risks however, depend on the amount of rain, especially in the late spring, and on the frequency of thunderstorms during the summer. Last year, in early July, there was a large lightning burst in the Cariboo, igniting more than 200 fires, Turcot said.

As over the years, forests in

As over the years, forests in British Columbia have become a major "source" of GHG emissions instead of a "sink", the government has decided not to take into account GHG emissions coming from "natural disturbances" (e.g. wildfires, insect infestations such as the mountain pine beetle). Canada under the Harper administration adopted the same policy as it was dropping out of the Kyoto Protocol.
IPCC guidelines are that countries include emissions and subsequent removals associated with natural disturbances on managed land in their national GHGI (greenhouse gases inventory), including those which are out of human control (Canada's managed forest area covers around 226 million hectares, or 65% of Canada's total forest area).
"In 2015, total net emissions of carbon dioxide equivalent (CO2 eq) from Canada's managed forest were about 221 million tonnes (Mt). Human activities in Canada's managed forest accounted for removals (sink) of about 26 Mt CO2 eq in 2015, while large scale "natural disturbances" accounted for emissions of about 247 Mt CO2 eq. If accounted it would have represented roughly 34.2% of Canada's total GHG emissions in 2015.
As a party, to the United Nations Framework Convention on Climate Change (UNFCCC), Canada must report annually on greenhouse gas emissions from the managed forest. The managed forest is made up of all forests under direct human influence."
(source: Natural Resources Canada, Sept. 28, 2017. Indicator: Forest carbon emissions and removals)
Canada's 2018 submission to the UNFCCC "National Inventory Report 1990-2016: "Greenhouse Gas Sources and Sinks in Canada" does not include emissions from "natural disturbances" on managed forests.
From Canada's Second Biennial Report on Climate Change to the UNFCCC (April 2016), section 5.1, footnote: "Canada is in the process of developing an estimation methodology that focuses on anthropogenic LULUCF emissions and removals and that would remove the impacts of natural disturbances (e.g., forest fires, insect infestations) for the full time series of managed forest emissions/removals (both historical and projected emissions)...Canada has indicated that is accounting for managed forests toward its emissions reductions target will exclude the impacts of natural disturbances because these impacts are non-anthropogenic."
This statement is in total contradiction with most independent and governmental (including federal) scientific research that shows the impacts of climate change on Canada's forests. By saying that impacts on natural disturbances are non-anthropogenic, the federal government is assuming that climate change, which is the result of human activities, has nothing to do with the facts that the "average number of hectares of forests burned in Canada annually (2 million he) have doubled since the late 1970's, and are predicted to double or more by the end of the century, because of warmer temperatures expected as a result of climate change".
(source:Natural Resources Canada, Dec. 04, 2016: "Peatland fires and carbon emissions")