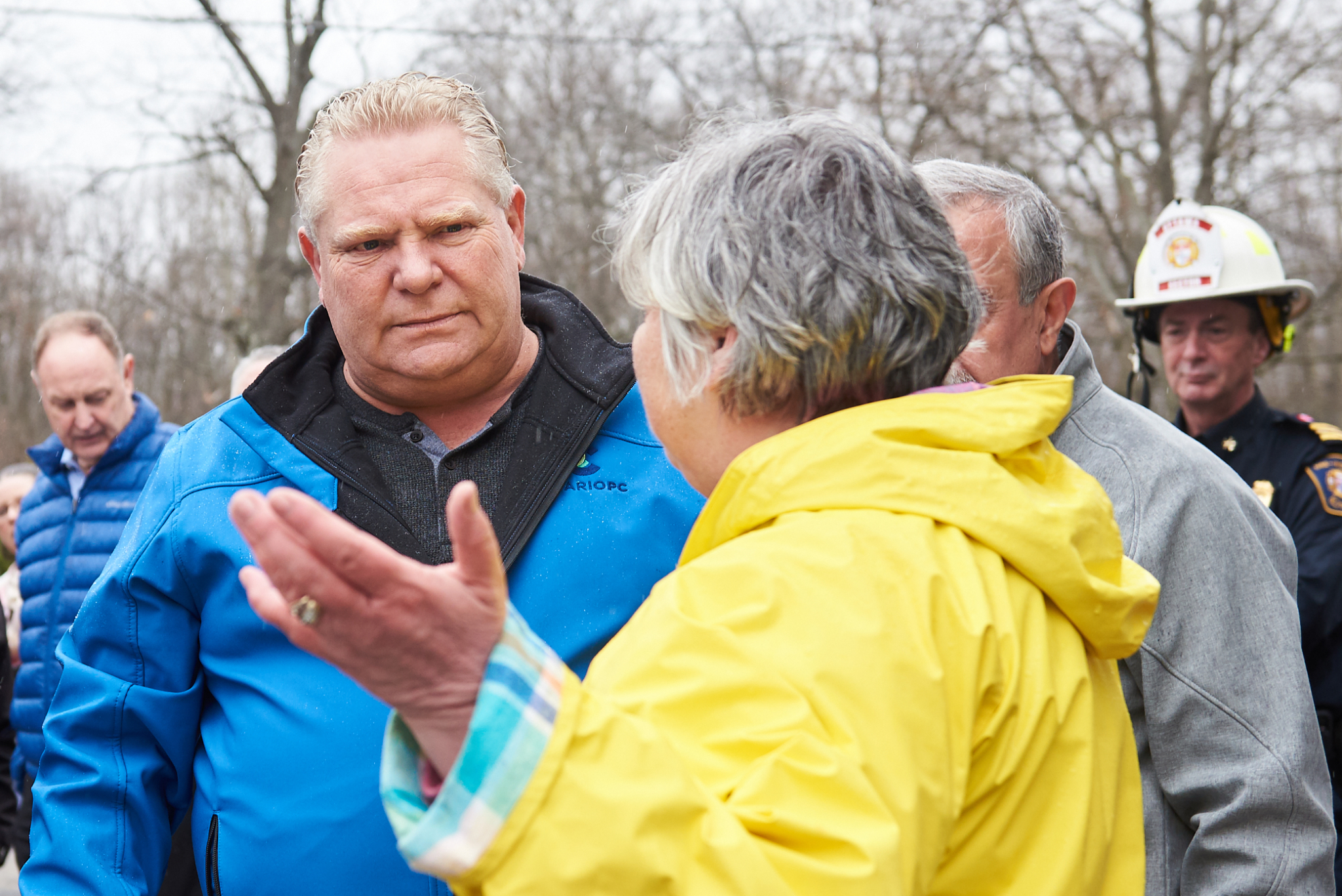 Premier Doug Ford listens to a resident affected by flooding in Constance Bay, northwest of Ottawa, on April 26, 2019. Photo by Kamara Morozuk
Previous story
Next story

Doug Ford’s natural resources minister shared plenty of thoughts on Thursday in response to a newly released report the provincial government commissioned on severe flooding that hit swathes of the province last spring. But he failed to touch on the relevance of human-induced climate change.

Instead, John Yakabuski largely sought to duck Ontario's responsibility to deal with either the causes of climate change or its effects, saying that “fiscal challenges” and “shared responsibility” — what critics say is code for get the feds or cities to pay for it — were the order of the day.

The report, authored by independent advisor Doug McNeil, made 66 recommendations for Ontario to improve its flood policy framework, including by making changes to floodplain mapping and helping municipalities conserve and restore wetlands and other natural defenses against flooding.

Yakabuski did not commit to any additional funding to implement McNeil’s recommendations, saying any decision on whether to expand his ministry’s budget would be made in upcoming cabinet consultations.

But even if funds are forthcoming, any additional cash for climate action would in any case only be putting back into climate mitigation efforts Ford cut.

The first Ford budget had slashed by 50 per cent the flood management funds given to conservation authorities by his ministry to protect Ontario's watersheds and canceled tree-planting efforts that limit flood damage.

“We have fiscal challenges in Ontario, and we have to review these (recommendations) with our ministries to make sure that what can be done quickly will be done quickly,” Yakabuski said. “And what will take a little more time to implement, we will be doing that in a timely fashion as well.”

Ontario was raising almost $2 billion a year from the cap and trade scheme Ford scrapped, which was being re-invested in a range of initiatives to address climate change, many of which have also been canceled or weakened under Ford. Abandoning that system pushed Ontario into the federal government's carbon pricing scheme, which Ford's government is fighting in court.

McNeil's report didn't address the underlying fact that climate change is leading to more frequent and more extreme weather events, since that was outside its mandate.

Asked specifically if he believed the increased severity and frequency of flooding is a direct result of human-induced climate change, Yakabuski avoided the question and repeated that Ontario would be acting on the report as quickly as possible given these fiscal challenges.

“We're going to have to make sure that we have a way, co-operatively with all governments, all levels, all agencies, how we can build better to ensure that we can mitigate and be more resilient to the floods, if and when they come,” he told reporters.

To critics that sounded as if the Ford government wants the federal government to cough up the cash to deal with the effects of the climate crisis while Ontario does nothing of substance to adapt to it.

“Shared responsibility is generally a code word for ‘We won’t pay, somebody else should,’” said Dianne Saxe, the former environmental commissioner of Ontario, whose job was axed by Ford.

Green Party Leader Mike Schreiner said the entire report was dealing with the effects of climate change, and that Yakabuski’s comments and the Ford government’s policies are ignoring it.

“Unfortunately over the past year and a half, the Ford government has reversed almost every ounce of climate mitigation that Ontario had in place, which in and of itself was inadequate,” he said.

“We know that flooding will happen, but due to climate-induced extreme weather events, that flooding is getting worse, and we need to be putting funding into programs to mitigate the damage not cutting those programs,” Schreiner said.

The Ford government is appealing lower court rulings that Ottawa is within its rights to put a price on carbon pollution and collect revenues from polluters in provinces that fail to meet a national standard. The independent think tank, Ecofiscal Commission, says quadrupling Canada's carbon price by 2030 is the most cost-effective way for the country to meet its climate targets.

The Ontario flooding was caused by a colder-than-average winter and spring, higher-than-average snow pack, lack of a significant winter thaw, rapid snow melt and a lot of rain in the spring, the report says, with no evidence human error or negligent use of water control structures contributed.

The recommendations from McNeil, a water-management expert and former senior civil servant from Manitoba, included a call for the Ford government to refer to “impacts of a changing climate” throughout government policy on land use planning and make updates to flooding technical guides "with a view to providing for current science and climate change.”

But Yakabuski's lack of interest in talking climate action is just one reason to worry about whether current science is informing Ford government climate policy. On Tuesday Energy Minister Greg Rickford faced sustained questions about his position on the scientific consensus on climate change since citing a climate change denial blog in defence of scrapping green energy projects. And Ford himself visited flooded areas outside of Ottawa back in April and would only acknowledge that “something’s going on, and we have to be conscious of it.”

McNeil was not available to comment on his report.

The government says it has so far spent $3.7 million to help Ontario residents, small businesses and nonprofits recover from the spring floods, which also hit parts of Quebec and New Brunswick in April and May this year. They followed similarly severe floods in 2017.

The government’s 2019 budget cut funding to Yakabuski’s Ministry of Natural Resources and Forestry by 14 per cent, and it has slashed by 50 per cent the flood management funds given to conservation authorities that protect Ontario's watersheds.

Ian Arthur, the NDP’s environment critic, said that even if funds are found after the fact, that does not adequately address the scale of the problem.

“This type of flooding and the frequency of this flooding is a direct result of the changing climate and the climate crisis,” said the NDP MPP for Kingston and the Islands, a riding whose resident were affected by both the 2017 and 2019 floods.

“And we need to have a complete paradigm shift in how we understand this, the impact that's going to have on people's lives, and how we need to respond to it and the funding that is necessary to do that response,” he said.

The Green’s Schreiner called on the Ford government to reverse its cuts to the flood prevention programs and remove parts of an omnibus bill going through committee now which would weaken laws protecting Ontario's water.

He also called on the Ford government to reinstate its funding for the 50 Million Tree program, which both captures carbon from the atmosphere and mitigates the risk of flooding.

But here there is historic precedent that suggests Ford’s government might be onto something with its call for others to share the load; the federal Liberal government of Justin Trudeau stepped in to rescue that program two months after Ford cut it.

The Ford government separately announced on Thursday the formation of an advisory panel on climate change that will focus on how Ontarians can prepare for climate change costs and impacts.

Ford is a planet killing

Ford is a planet killing climate denying buffoon and I'm still waiting on some moronic conservatives to have buyers remorse!