COP25 derailed as polluters prioritized over people and planet

By Climate Action Network Canada | Opinion | December 15th 2019
#1189 of 2037 articles from the Special Report: Reports from the Race to a Safer World 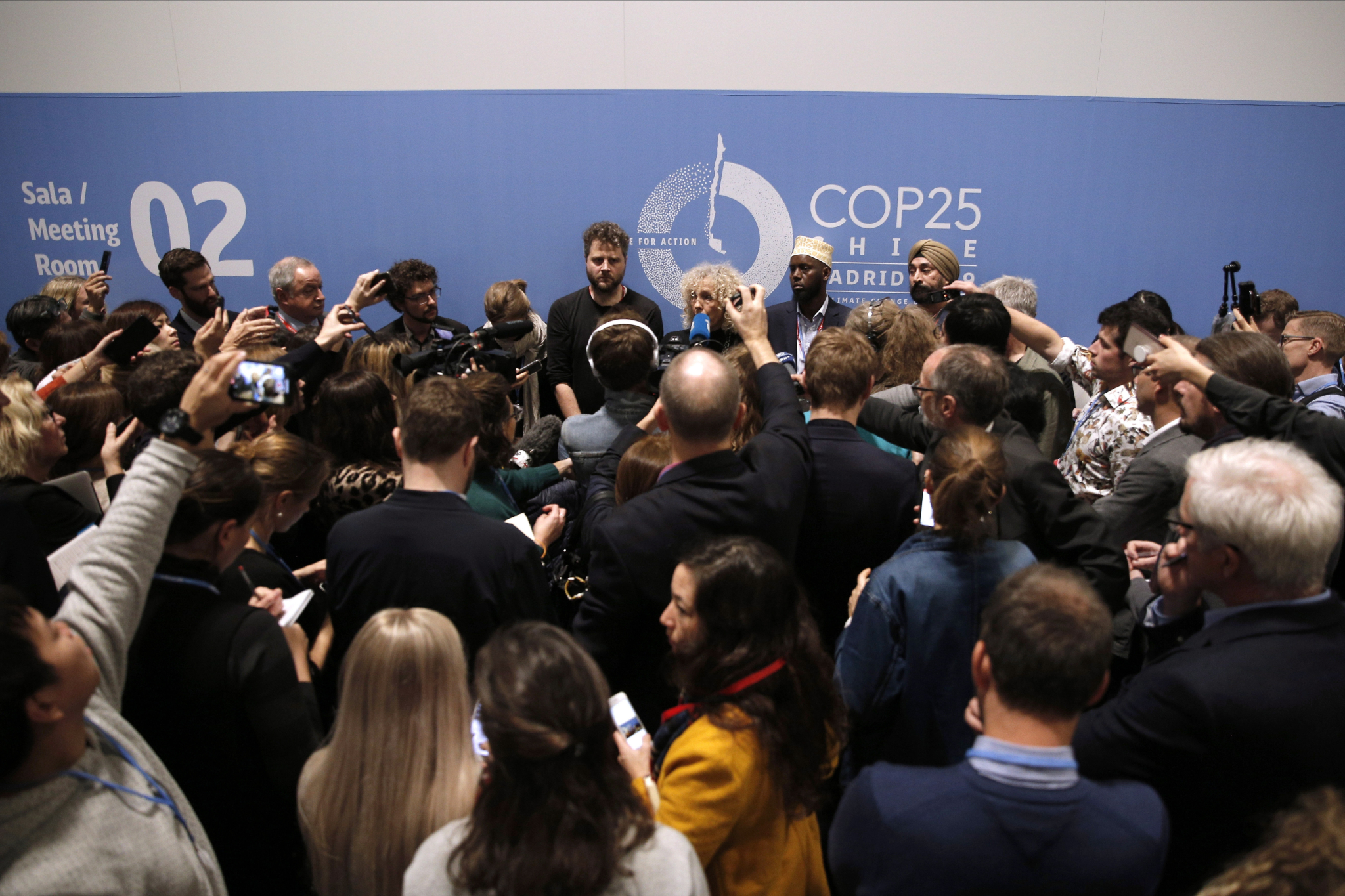 Members and allies of Climate Action Network Canada made the following statements at the conclusion of COP25:

“You know something is broken when those demanding climate justice are pushed outside of the climate conference - as hundreds were this week - and those delaying climate action are allowed to stay inside.

These negotiations were supposed to deliver a clear, resounding call for more ambitious emissions targets and financing for climate vulnerable countries already experiencing the devastating impacts of the climate crisis. Negotiators were supposed to deliver strong rules for carbon markets that would uphold the environmental integrity of the Paris Agreement and safeguard human rights and the rights of Indigenous Peoples.

Instead, big polluters and the countries most historically responsible for the climate crisis have been able to ruthlessly advance the fossil fuel industry’s profit agenda over our collective futures - while those calling for justice have been sidelined and physically removed.

On every issue of significance, COP25 has delivered a mediocre or non -outcome that betrays the millions of people around the world calling for real climate action. While Canadian negotiators were largely constructive on the ground, Canada has a lot of work to do at home to address the gap between its climate goals and its ongoing commitment to expand the fossil fuel industry, which got a lot of international attention here in Madrid. Minister Wilkinson must increase Canada’s climate finance contributions and deliver on his government’s election promise to bring a new, more ambitious Paris pledge to COP26 in 2020.”

“It has become unmistakably clear that the UNFCCC and government parties are not interested in upholding the rights of Indigenous Peoples yet continue to rely on our knowledge systems that have safeguarded the world’s biodiversity. Colonization and capitalism are at the root of this climate emergency, and global leaders have shown they will continue to prioritize corporate interests over human rights and the rights of Indigenous Peoples. The COP25 has resulted in a push for market-based solutions that only further entrench neocolonial structures that do nothing to get us closer to climate stabilization while further putting Indigenous peoples at risk.

As someone from a tar sands extraction region of Canada, a country with existing laws and regulations that are supposed to uphold Indigenous rights, I have witnessed the continued destruction of my peoples’ lands and territories for corporate profits. It’s clear that Indigenous Peoples need to be empowered to have direct control over our lands and territories and be fully supported to participate as equals within the UNFCCC processes or we are doomed to continue these patterns of profits over people built around colonial capitalist ideals. Only through a system that reflects and values the worldviews of our diverse Indigenous communities will our natural systems be able to flourish again.”

“The truth and integrity from the land and the people will shake the foundations of corporate structures and international negotiations. It’s been made clear that there is no room for ethics in these international negotiations. The people need to carry the work that negotiators can’t. Guided by the Ni’inlii declaration we will continue to inform, educate and equip young Indigenous people to be leaders in climate action.”

“We see once again the lack of ambition of States to respond to the climate emergency. The Quebec Federation of Workers (FTQ) demands that the voices of billions of people be heard. We cannot solve this climate crisis by transforming it into a social crisis. We demand a robust framework in which the Just Transition can take place. Workers and their communities must be at the heart of the solutions. Only a social dialogue where everyone has an equal voice will allow us to get out of this crisis. Although the states failed to answer the call, the FTQ joins all the groups of civil society to implement a real energy transition. What we want is a Just Transition and there will be no Just Transition without the workers.”

“COP25 made clear that the UN climate process - older than most of us at YCL - is not fit for purpose as it stands if it cannot galvanize the ambition needed to safeguard the futures of young people and generations to come. We won’t accept failure as an option. The young people of the world, especially Indigenous youth and others on the frontlines, are demonstrating what real ambition and action looks like. We demand leaders around the world follow suit.”

“It wasn’t just that the COP25 outcome was a disaster. It was also demoralizing and enraging to see countries erase human rights and the rights of Indigenous Peoples, not only in the text but in reality, and erode the environmental integrity of the Paris Agreement. It will be up to people in Canada and around the world to continue to mobilize and push governments to take real climate action.”

“We are seeing the impacts of climate change but what we are not seeing is the global political leadership needed to tackle this crisis in a meaningful way. World leaders at the UN Climate Summit here in Madrid simply proved they are falling further behind citizens, who are calling for urgent action to address this crisis. Although the UN Climate Summit failed to deliver substantial outcomes, it is clear that we are making progress in our homes, in our communities, and by making climate action the top priority in the recent federal election. Governments and provinces that don’t act decisively in the coming year will deprive younger generations of their right to a safe future.”

“We are nearing a tipping point. Citizen mobilization has become so strong that invested fossil fuel interests are getting worried and pushing back. They may have been able to slow down the progress here at COP, but the energy transition is inevitable. We all have to keep up the pressure at home.”

"Our future is literally at stake. We don't have any other choice than trying through all possible means, in courts - with a climate class action against Canada - on the streets, in local initiatives or through the elaboration of national plans - such as the Quebec climate change plan. On a 1.5°C warmer planet, impacts are frightening. We need to act now, in respect of Indigenous rights and human rights, younger generations and those to come."

“It is a travesty of global politics that a small group of climate laggards continues to undermine global efforts to confront the climate crisis, even as it fuels social unrest, rising hunger, runaway migration, and conflicts that know no end. The world’s poorest people – especially women and girls – are bearing the brunt of the climate crisis, though they did the least to cause it. Although many of the solutions are available and eminently affordable, COP25 once again failed to mobilize the quantity and quality of support needed to put those solutions into action.”

“The slogan for COP25 was “Time for action”, which was ironic because so much time was wasted on ineffective negotiations in Madrid. We don’t have any time to lose, we can’t afford to. Young Canadians are feeling the urgency more than ever. We are calling on our governments to listen to our recommendations when we show up at the table. It’s now more important than ever to centre climate justice and uphold Indigenous sovereignty if we’re truly committed to being climate leaders.”

“Parties have failed to deliver at this year’s UN climate change conference, including on landing strong rules to make sure the global use of emissions trading results in real emissions reductions and upholds human and Indigenous rights. It is crucial that Canada develop a robust national strategy to align our use of markets with these principles and with our commitments to raise climate ambition, here and abroad. This strategy must acknowledge the inherent danger of substituting one fossil fuel with another. To limit warming to 1.5 degree Celsius, Canada has to dial up ambition — every decision we make must align with this goal.”

“The stakes couldn’t be higher. Millions are being displaced, thousands have died in heat waves, fires and floods already. Every day and every ton of carbon matters. The lack of ambition in Madrid will cost lives. It’s time to start listening to the people not the polluters.”

The piece of the Paris Agreement no one can agree on

By Emma McIntosh | Analysis, Politics | December 13th 2019
Reports from the Race to a Safer World

The integrity of roadless

The integrity of roadless island and mountain forests, for the sake of soil, freshwater, saltwater estuaries, land animals, birds, and marine creatures, must not be compromised. Places sacred to the original inhabitants must be respected, as anyone would want for their own sacred places, wherever they may be.