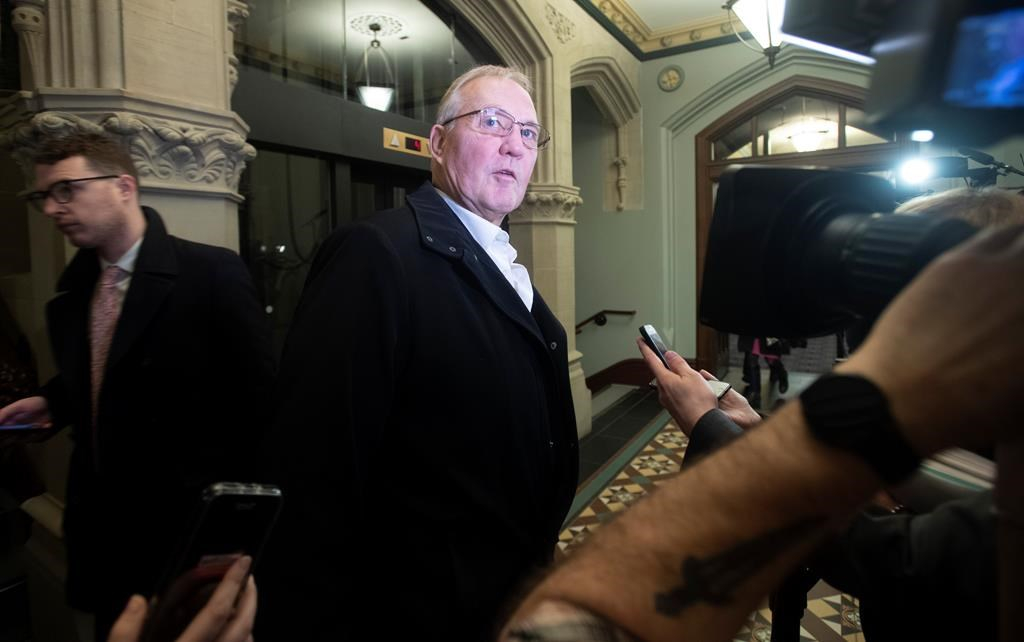 As tensions at rail blockades in Quebec and Ontario escalated Wednesday, Public Safety Minister Bill Blair appeared to dismiss the notion that police will move completely out of the vast Wet'suwet'en territory in British Columbia.

The hereditary chiefs of the First Nation at the heart of countrywide rail and road disruptions have said they will not meet with federal and provincial officials to discuss their opposition to the Coastal GasLink natural gas pipeline until the RCMP leave their traditional territory entirely and the company ceases work in the area.

Blair said the RCMP, which is under contract to police provincially in B.C., has removed its officers from an access road to a work site for the pipeline and stationed them in the nearby town of Houston, about 300 kilometres west of Prince George.

But when it comes to the hereditary chiefs' demand that the RCMP leave the 22,000 square kilometres of Wet'suwet'en traditional territory — an area about twice the size of Cape Breton Island — Blair said the people who live there have a right to be protected by police.

"I think there's a very important principle: there are thousands of Canadians that live in that area and are entitled to policing services," Blair said Wednesday.

"Every Canadian, regardless of where they live, is entitled to the protection and the services of a police service and the upholding of the rule of law in their jurisdiction and so we remain committed to that."

Blair's comments came as protesters on the Kahnawake Mohawk territory south of Montreal hardened a rail blockade on their land.

The secretary of the Mohawk Nation at Kahnawake, Kenneth Deer, said in a statement that any move to enforce an injunction granted to Canadian Pacific Railway would "exacerbate an already volatile situation."

The First Nation's Grand Chief Joseph Tokwiro Norton had declared the day before that the injunction to reopen the tracks "will not be executed on this territory," noting that Kahnawake Peacekeepers who work in the territory are the only policing agency with jurisdiction in the area.

Peacekeeper Chief Dwayne Zacharie said in a joint statement with Norton the peacekeepers have "no interest in criminalizing people for standing up for our rights."

This raises questions about what options are available to public safety officials looking to enforce the court injunction to end the blockade.

When asked if RCMP or the provincial police force, the Surete du Quebec, could intervene, Blair was vague.

"There are other circumstances, depending on the direction either in the law or from the courts, that can have an impact on that, and that's why I would suggest that it is complex and it really depends on that jurisdiction and the directions received."

Quebec Premier Francois Legault said he is leaving it up to the provincial police to develop a strategy to deal with the Kahnawake blockade, saying it is an especially delicate situation because of reports he says that he has received that some of the protesters are carrying assault rifles — an allegation rejected by the First Nation, which stressed the demonstration is peaceful.

Meanwhile, rail disruptions resumed in Tyendinaga Mohawk Territory near Belleville, Ont., not far from the scene of a major Ontario Provincial Police operation earlier in the week that dismantled a blockade that had thwarted all train traffic in the area for more than two weeks.

A handful of protesters lit fires near and on railway tracks at a camp that remained in place after Monday's raid — actions denounced Wednesday by Blair, Prime Minister Justin Trudeau and Transport Minister Marc Garneau.

"This was an extremely reckless act," Garneau said, noting this could have endangered many lives, as trains that briefly resumed passing through the area might have been carrying dangerous goods that could have ignited.

In the midst of these developments Wednesday, Crown-Indigenous Relations Minister Carolyn Bennett said the Wet'suwet'en hereditary chiefs have been meeting with one another in B.C. over the last two days after some of them travelled to Ontario and Quebec to meet Mohawk supporters last week.

A two-day meeting between the chiefs, the federal government and B.C. government planned for Thursday was abruptly cancelled, but was back on by Wednesday evening.

Chief Na'Moks, who also goes by John Ridsdale, said government officials told them the cancellation was due to a "misunderstanding."

He said officials asked chiefs to request that its supporters and other First Nations "step down on their actions," but the chiefs responded that they can't tell others what to do.

A spokesman for the office of the B.C. premier said Wednesday that the report of a rescheduled meeting was "promising," but the provincial government was not in a position to confirm it until Thursday morning.

The federal governments could not immediately be reached for comment.

The hereditary chiefs have said they want an RCMP mobile detachment on the access road to the pipeline work site removed and they also want the Mounties to stop foot patrols.

New Democrat MP Nathan Cullen has resumed his role as mediator in the tense discussions and he informed the chiefs the RCMP is willing to dismantle the mobile unit but can't meet the chiefs' deadline of Thursday, Na'moks said.

Na'Moks said the chiefs have agreed that as long as the foot patrols stop and the unit remains shuttered before the talks, they are satisfied. He has previously said the chiefs are not expecting the closure of permanent detachments in nearby communities like Houston or Smithers.

During question period Wednesday, NDP Leader Jagmeet Singh charged that the current "national crisis" involving the blockades could have been avoided if Trudeau had met with the hereditary chiefs himself a month ago.

"They've long called for that, they've asked that it would be a key step that could be taken to help de-escalate the situation," Singh said Wednesday.

"I, again, am imploring the prime minister ... do your job, meet with the hereditary chiefs, stop delaying this."

But Trudeau said other Indigenous leaders within the Wet'suwet'en community, including some who support the pipeline project, have told him they would consider a meeting of the prime minister with one group of leaders — the hereditary chiefs — as interference in the work they collectively need to do to find a path forward.

"I am, of course, open to engaging constructively, but in the right way," Trudeau said.

This report by The Canadian Press was first published Feb. 26, 2020.

—With files from Amy Smart in Vancouver, Morgan Lowrie in Montreal and Paola Loriggio in Toronto.

"residents in Wet'suwet'en territory have right to police protection"

Boy, that is just rich.

I heard a story on CBC about the complex mix of bitterness, frustration, and anger coming from a mother of a murdered Indigenous girl, as dozens of RCMP paraded through Smithers on their way to haul the Land Defenders away.

That particular mother had asked for police support when her daughter went missing just over a year ago. She was told there weren't any resources available to look for the daughter.

So she rounded up members of her community, and they went searching around Smithers, and finally located her daughter's raped and strangled body, discarded like a sack of garbage, in a nearby ravine.

The police FINALLY showed up, took evidence, and then… NOTHING! For a year, the family has been waiting to hear something, ANYTHING about their daugher's death. And then on the first anniversary, some 40 RCMP officers troop through her community, on their way to protect the rights of a pipeline company.

Is it any wonder these people are bitter? SHAME ON YOU, BLAIR! It would be different if the RCMP were actually providing "police protection" to the Indigenous people in the area — BUT THEY AREN'T!

"Just another dead injun." Blair must have been referring to the WHITE people who needed "police protection."