Calgary Stampede lays off 80 per cent of its workers 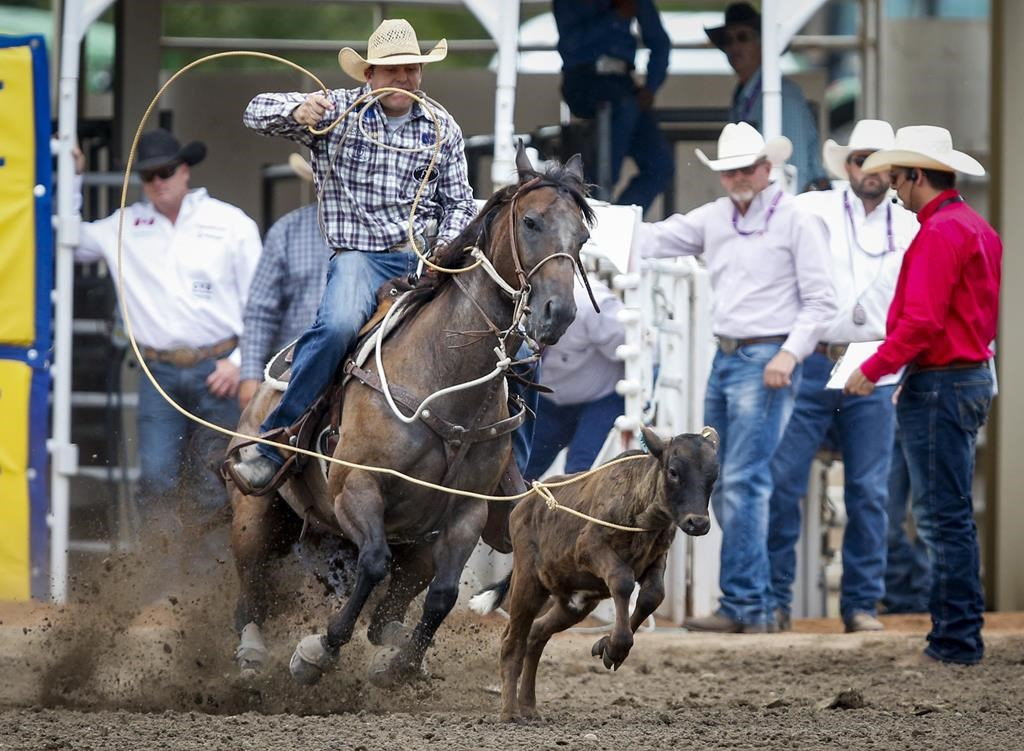 Caleb Smidt, of Bellville, Texas, ropes a calf during semi-final rodeo action at the Calgary Stampede in Calgary, on Sunday, July 14, 2019. File photo by The Canadian Press/Jeff McIntosh
Previous story
Next story

The future of the 2020 'Greatest Show on Earth' is up in the air after the Calgary Exhibition and Stampede temporarily laid off 80 per cent of its staff Tuesday as a direct result of the COVID-19 pandemic.

Stampede CEO Warren Connell said the organization had laid off a total of 890 workers — 608 were casual part-time and the other 282 that were regular part-time and full time.

He said the Stampede is a not-for-profit group and simply can't afford to keep things operating as usual.

"By taking these dramatic measures of temporary layoffs we're looking to support the long-term sustainability of the organization and its role in the community. Hopefully with those jobs we will be able to provide again relatively soon depending on how things go," Connell said.

The exhibition hosts 1,200 other events besides the 10-day Stampede, ranging from weddings with 200 to 300 guests to car shows that attract upwards of 60,000 spectators.

"When the restrictions came out, the car show closed its doors after two days of being open and then we haven't had a single event on Stampede park and for the foreseeable future don't have any events booked that are moving forward," Connell said.

The final straw was an announcement by the Alberta government that it was declaring a state of public emergency that banned all gatherings of more than 50 people — including weddings and funerals. Public recreation facilities, casinos, bingo halls, bars, museums and art galleries would be closed immediately.

"I think we're in exactly the same position that everything, from bars to theatres to recreation centres are in. I think perhaps the impact of the restrictions would have an immediate impact at the Stampede quicker than most groups," Connell said.

The Stampede attracted more than 1.2 million visitors last year. Connell said the planning for the 2020 Stampede will continue despite the uncertainty.

"Those employees that are still here are part of the essential services group that are planning different contingency plans so we can assess our ability to actually host Stampede 2020," he said.

'Saddened' - Calgary Stampede temporarily lays off 80 per cent of workforce

Connell said it would be premature to suggest a date where the event can't go ahead considering the 2013 Stampede was held less than two weeks after devastating flooding in Calgary and southern Alberta.

"We have to be prepared to be able to call back the employees that were temporarily laid off and get up and going ... not just for the 10 days of Stampede but remember we do these 1,200 events," he said.

"We're all sitting and obviously waiting to see as we go down this trail any clarity to the unknowns that we're all facing."

Connell said the laid off employees will be provided financial assistance and added it was a difficult day for everyone.

"We certainly expressed how saddened we are by the measures we had to undertake and that our thoughts were with those employees and their families that were impacted by this decision."

This report by The Canadian Press was first published March 17, 2020

Well, with any luck, the

Well, with any luck, the Stampede will never open again. The animal cruelty and horrible deaths of many horses in events like the chuckwagon race, just to provide entertainment for people who have no compassion or empathy for other species, have no place in a modern, civilized society. To quote Mahatma
Gandhi, "The greatness of a nation and its moral progress can be judged by the way its animals are treated."