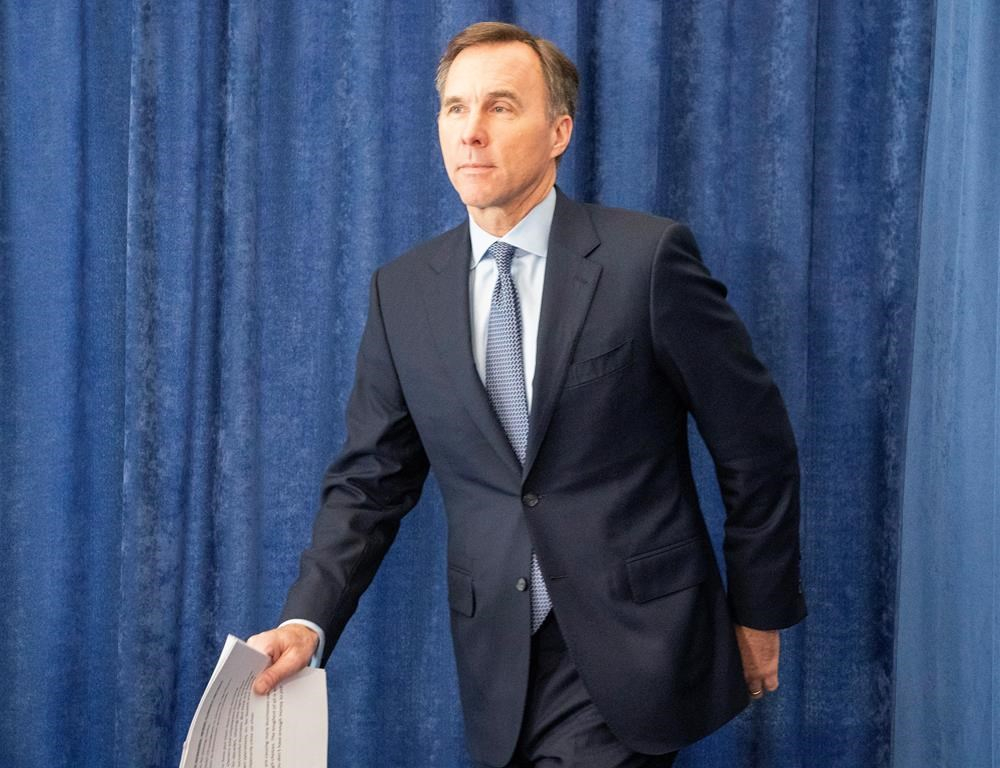 Prime Minister Justin Trudeau and his ministers are expected today to amplify their message that Canadians have a duty to stay home, even as the massive cost of compensating them for doing so becomes clearer.

Finance Minister Bill Morneau is scheduled to testify this afternoon at a teleconference meeting of the House of Commons finance committee, where he'll be peppered with questions about some $200 billion in direct financial aid and tax deferrals already promised to help individuals and businesses weather the brutal economic impact of the COVID-19 pandemic.

He can expect to hear demands from opposition parties to do more, faster.

Conservatives have been calling on the government to scrap an increase in the carbon tax, to $30 per tonne from $20 per tonne, that went into effect Wednesday.

They've also called on the government to refund GST payments made over the past six months.

New Democrats, meanwhile, have been pushing the government to provide relief for Canadians who can't afford to pay their rent.

And the Bloc Quebecois is pushing for faster implementation of the emergency 75-per-cent wage subsidy, the details of which the government has been fleshing out in bits and pieces for a week. It is expected to take six weeks to get up and running.

Trudeau has called the $71-billion program "the largest economic program in Canada's history" and officials point out that such a massive undertaking would normally take months, if not years, to develop.

Because of the magnitude of the program, the government is planning to recall Parliament again to authorize it — a move Bloc Leader Yves-Francois Blanchet fears will cause more delays.

Parliament, adjourned in mid-March until at least April 20, sat briefly last week to approve a first phase of financial aid.

Conservative leader Andrew Scheer blames the government for failing to include the enhanced wage subsidy in that initial package. But Blanchet blames the Conservatives for playing partisan games and forcing the Liberals to withdraw a provision that would have allowed the government to proceed quickly with the program without recalling Parliament.

Meanwhile, the parliamentary budget officer is to post today reports on the cost of four measures that were included in last week's aid package: special payment of the GST credit, the insured mortgage purchase program, a temporary increase in the Canada Child Benefit and a decrease in the minimum withdrawal rate from registered retirement income funds.

At today's daily news conference, Trudeau is expected to amplify his message that it's up to Canadians to determine how bad the crisis will get and how long it will last. As he stressed Wednesday, the more Canadians abide by orders to stay home and keep their distance from others, the sooner they'll be able to get back to normal.

Today's daily briefing from ministers is expected to include an update on efforts to bring home Canadians stranded abroad and the government's strategy for dealing with COVID-19 in Indigenous communities, particularly remote communities in the North.

Why will the government not

Why will the government not share the numbers of their projections of COVID19 infections or deaths?

I smell a rat.