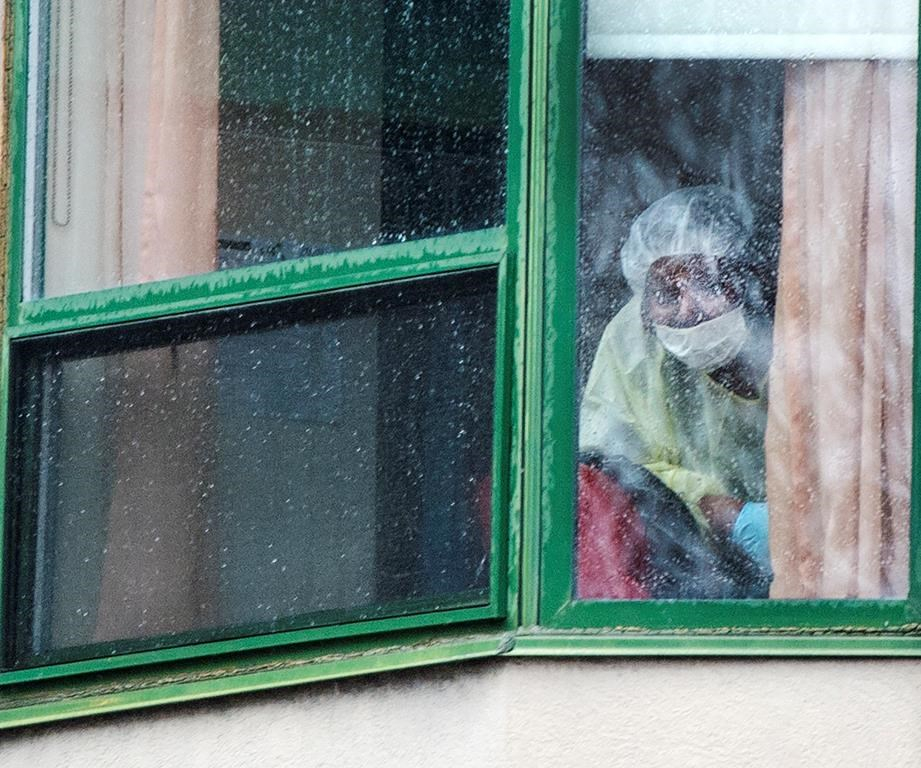 A person wearing protective equipment looks out of a window at the Herron seniors residence on Monday, April 13, 2020 in Dorval near Montreal's Trudeau airport. File photo by The Canadian Press/Ryan Remiorz
Previous story
Next story

COVID-19's grim march through many of the country's nursing homes left more residents dead on Tuesday as the facilities fought desperately to stem the lethal spread of a virus that has prompted crushing restrictions on normal personal and commercial activity.

While several provinces — Manitoba, New Brunswick, Newfoundland and Labrador, and Prince Edward Island — reported no new cases, Canada closed in on 27,000 confirmed and presumptive incidents of coronavirus disease, about 900 of them fatal.

The virus has hit older adults — those 60 and up — disproportionately hard, with vulnerability increasing with age. More than half the deaths in the country have occurred in long-term care homes.

"These stories are horrifying," Prime Minister Justin Trudeau said, even as he noted long-term care was a provincial responsibility. "We know we need to do more."

The virus has hit Quebec hardest among provinces, both in terms of its 14,248 cases and 435 deaths, with 90 per cent of those fatalities among people over 70. Dozens of long-term care facilities had more than 15 per cent of residents infected, the province said.

Understaffing of long-term care was the biggest problem facing the province, Premier Francois Legault said as he appealed for help from any available health-care workers. In one effort to deal with the onslaught, a Montreal hospital said it would set up a special unit to care for up to 25 of the sickest patients from nursing homes starting next week.

Ontario, which extended its state of emergency for another four weeks, reported 43 new deaths on Tuesday for a total of 334. One seniors home in Toronto attributed nine more deaths to the virus, bringing to 25 the number of fatal infections.

Premier Doug Ford promised new orders allocating more resources to the province's nursing homes, where 90 outbreaks have occurred. Ford said the orders would restrict workers to one care home only in an effort to curb the spread of COVID-19 in the facilities.

"We have an inferno at long-term care," said Ford, whose mother-in-law is a resident at one hard-hit facility. "It's critical that we help the people."

Similarly, two residents of a care home in British Columbia tested positive just days after four staff members were diagnosed with the respiratory illness. The facility is among 20 long-term care and assisted-living homes in B.C. to be afflicted.

At the federal level, Trudeau announced that anyone returning from abroad would have to have a "credible" isolation plan or spend their mandatory 14-day quarantine period in a hotel.

While acknowledging Canadians were "very interested" to know when anti-COVID restrictions might lift, Trudeau said vigilance remained the watchword and no immediate easing was planned.

"The reality is that it's going to be weeks still," Trudeau said in Ottawa. "We're going to have to do it in phases."

Trudeau did promise more money for students and essential workers as well as support for those struggling with the payment of commercial rents. He also announced $130 million to help northern communities in part to support airlines that serve the North and to defray the steep cost of food and hygiene products.

Opposition Leader Andrew Scheer called on all federal parties to strike a deal for Parliament to meet safely. Accountability, the Conservative leader said, was essential even though he said he supported Liberal government efforts to cushion COVID-19's economic blow by spending more than $100 billion in relief.

Two emergency sittings in recent weeks occurred with the bare minimum of legislators in the House of Commons and Senate, but normal parliamentary business was scheduled to resume next week.

Another indication of just how devastating anti-pandemic measures have been on the economic front came from the International Monetary Fund, which predicted Canada's economy would shrink by 6.2 per cent this year. That is more than double the forecast global retraction of three per cent, which would be the worst year since the Great Depression of the 1930s, the IMF said.

-With files from Canadian Press reporters across the country.

This report by The Canadian Press was first published April 14, 2020