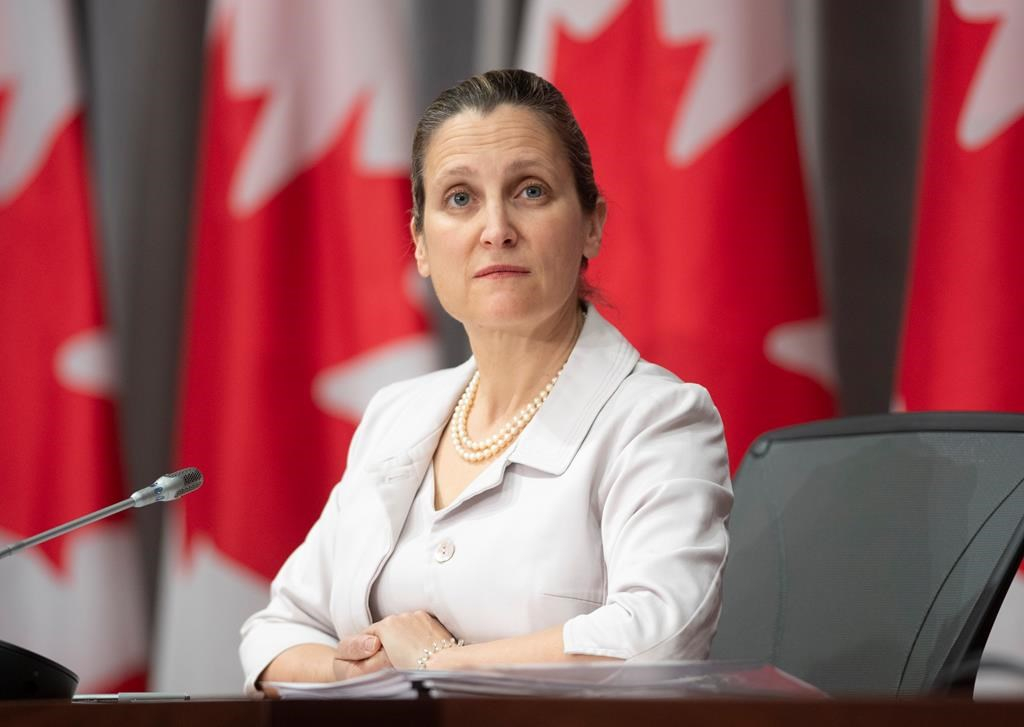 Deputy Prime Minister and Minister of Intergovernmental Affairs Chrystia Freeland listens to a video conference speaker during a news conference in Ottawa, on Friday, May 15, 2020. Photo by The Canadian Press/Adrian Wyld
Previous story
Next story

Canada and the United States are both "very comfortable" with their mutual ban on non-essential cross-border travel, but Deputy Prime Minister Chrystia Freeland won't say if the Americans want to extend the restrictions beyond June 21.

Recent media reports suggest the U.S., fearing the import of COVID-19 cases, wants an indefinite timeline for existing restrictions at both the southern and northern borders. It's not clear if that pertains to the ban on non-essential travel or is specifically aimed at curtailing immigration.

Freeland refused Friday to discuss the details of Canada's ongoing talks with the U.S. beyond describing them as "very, very cordial" and "very constructive."

But when asked if the U.S. is looking for a longer timeline, she suggested that neither country is in any hurry to ease the restrictions.

"The essential travel is still happening. Both countries feel very comfortable with that."

Sources familiar with the discussions have confirmed Canada has requested the existing agreement, which is currently slated to expire next week, be extended for another 30 days until June 21. The U.S. has been receptive to that request, say the sources, who were not authorized to discuss details and spoke on condition of anonymity.

The New York Times reported earlier this week that President Donald Trump's administration is working on an order to extend indefinitely its ban on non-essential cross-border travel into the U.S., with the onus on Dr. Robert Redfield, director of the U.S. Centers for Disease Control, to decide when COVID-19 no longer poses a threat to Americans.

Critics have accused the anti-immigration White House of using the pandemic as an excuse to further restrict the flow of immigrants into the country, particularly over the southern border. But the northern border hasn't escaped their attention: a short-lived proposal to deploy U.S. soldiers near the Canadian frontier was aimed at intercepting illegal migrants.

Federal officials in Ottawa believe the Times report may be conflating the non-essential travel ban with separate immigration restrictions, which Trump imposed April 22 in the name of protecting U.S. jobs as the country reels under record unemployment levels.

"Decisions about the Canadian border are going to be taken by Canadians in the Canadian national interest, with the health and safety of Canadians first and foremost," Freeland said.

Canada's provincial premiers agree that a go-slow approach is the best strategy, she added.

"There was, I would say, a widely shared view expressed by the premiers that taking a prudent approach right now is the right thing."

This report by The Canadian Press was first published May 15, 2020.

By James McCarten | News, US News, Politics | May 12th 2020
Coronavirus in Canada