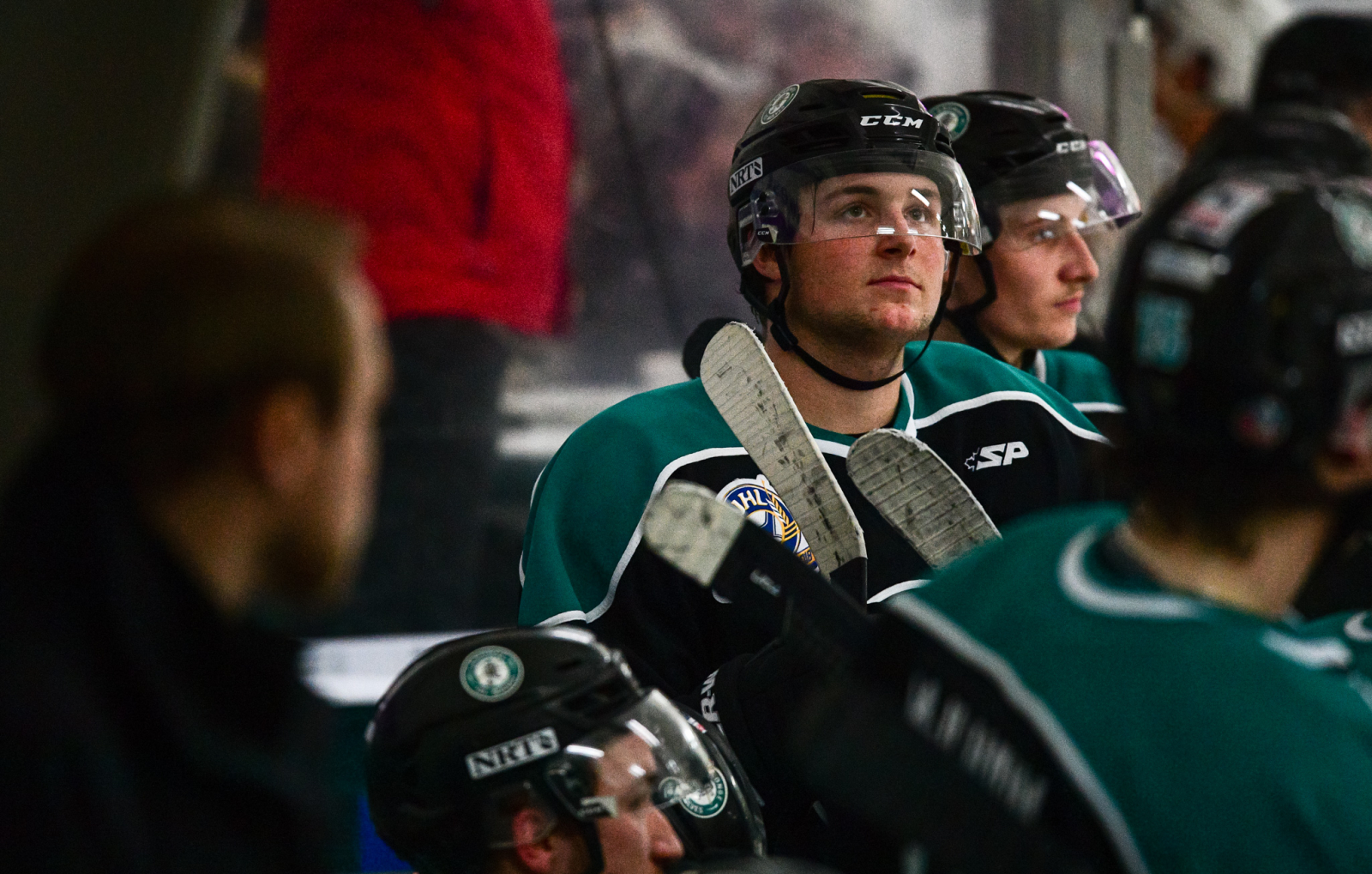 The La Ronge Ice Wolves are one Saskatchewan junior team that can't wait to start the season. Photo by Brandon White.
Previous story
Next story

In small towns across Canada, hockey isn’t just a game — it’s a religion. And nowhere is that truer than in northern Saskatchewan.

With good reason: Hockey heroes like Gordie Howe, Bobby Clarke, Jarrett Stoll, Jeff Friesen and Guy Lafleur, to name just a few, took their first skate around a small-town rink. Canadian kids grow up wanting a piece of that dream.

And in northern Saskatchewan, the dream starts with the home team, the La Ronge Ice Wolves, a junior "A" club in the Saskatchewan Junior Hockey League.

“I like the game to be greasy and gritty and physical,” Ice Wolves coach and former Washington Capitals centre Kevin "Killer" Kaminski told Canada’s National Observer on Wednesday. That’s the energy he wants to bring to the ice this season.

Growing up in the small Saskatchewan town of Churchbridge, Kaminski was one of those kids dreaming big. He said hockey was all he wanted to do.

“I think I started skating at 21 months. As mom and dad would say, we used Sears catalogues for shin pads. I love the game of hockey,” Kaminski said.

“It’s where the community meets.”

Kaminski said junior hockey might not be the big leagues (players' ages range from 16 to 20 years old), but it represents a chance for young people to dream of bigger things, such as the NHL or having the chance to go to college through hockey scholarships.

That’s why the pandemic has been so devastating for hockey families in La Ronge, who are waiting with bated breath for word on when the season will start.

“We’re a hockey family. All five of my children play hockey. It’s such a huge part of our lives,” Ice Wolves board member and Cree language teacher Marlee Proulx told Canada’s National Observer.

“It’s what makes our community… It puts us on the map...The kids see the Ice Wolves and they want to be a hockey player," Ron Woytowich.

Proulx said getting back on the ice is especially important for young men, who need role models and hope for the future as the school year begins.

She said the Ice Wolves don't have as much to pull from for marketing or fundraising, but have been successful in terms of recruitment.

“As far as I know right now, we had 10 20 year olds last year and I’m pretty sure eight are already committed for college this year. So those are huge numbers,” Proulx said.

Proulx petitioned La Ronge town council at its last meeting to support the team and help it keep its head above water since the Ice Wolves rely on fundraising and pre-season ticket sales to stay afloat, two things not possible because of the pandemic.

La Ronge Mayor Ron Woytowich said council went beyond Proulx's ask, waiving the team’s past debt and giving them free access to the rink this upcoming season when it starts.

He estimates the total cost to taxpayers for these moves at less than $40,000.

“It’s probably the same in every community that has a team like this. We have to support the team because in the long run, think of what would happen if the team went bankrupt. I think that’s the least we can do just to make sure that they’re still solvent next year,” Woytowich said.

On Wednesday, the team submitted its reopening guidelines for safe play and council approved a tentative date for the Ice Wolves to get back on the ice at the Mel Hegland Uniplex on Sept.18.

Woytowich said the town hasn’t got a problem with opening the rink provided the Ice Wolves follow all the rules for social distancing during play.

The catch-22 is that until the Saskatchewan Junior Hockey League (SJHL) receives guidelines from the provincial health ministry and announces a date for return to play, an official start date for the season remains up in the air.

Sports tournaments and interprovincial travel aren’t yet allowed under Saskatchewan's reopening plan and the province said it will give the green light to hockey once it gets the OK from health officials.

“All sport, including hockey, is subject to the guidelines of the Re-Open Saskatchewan Plan. The priority remains containing the spread of COVID-19, and the SJHL must observe the protocols outlined (in the plan),” government spokesperson Robin Speer told Canada’s National Observer.

“As the pandemic situation is very fluid, future adjustments to the public health order and the (reopening plan) will be determined based on the advice of the chief medical health officer,” Speer said.

Reopening hockey in the province has been mired in some controversy since four AAA minor teams from the Wheatland Wild Hockey Association and Yorkton’s Parkland Junior Maulers went to Manitoba for the North American Hockey Classic in Winnipeg this July.

The teams were chastised by Premier Scott Moe and chief medical health officer Dr. Saqib Shahab, who himself contracted COVID-19 at a curling bonspiel in Alberta, for breaching public health guidelines on out-of-province travel.

“It impacts everyone. They are going outside of what the parameters are, and ... really putting at risk the entire safe restart of sports,” Moe said in July.

But the Parkland Junior Maulers cited communication with the province indicating that they could visit Manitoba under the condition that local guidelines be followed.

Mayor Woytowich worries the community could become divided over the return of hockey in the same way it did with reopening La Ronge to visitors.

“My gut feeling is that we’re going to have the same fun as we had with the province opening us up and suddenly all the people with cabins from down south coming up here,” he said.

That’s because some Ice Wolves players are billeted in La Ronge from outside the province, and, in some cases, from the United States.

Even though out-of-province players will undergo two-week quarantines and COVID-19 testing, Woytowich said their presence could raise alarm bells among some residents.

“The community is split on whether we want them to come up here. It’s going to be the same thing with hockey if you’ve got teams driving up here,” he said.

But that doesn't take away from the importance of keeping the home team.

“It’s what makes our community… It puts us on the map. It brings business to the community and it shows the value of La Ronge. Even something as simple as having the games,” Woytowich said.

“The kids see the Ice Wolves and they want to be a hockey player and that boosts involvement in minor hockey as well.”

Juniors are planning for the season, and the Ice Wolves say they’ll push through no matter what.

“The guys who are coming back, they’re just eager to go.”

Johns said even if the 2020-21 season starts in December, they’re hoping to play a full slate of games.

“We might end up playing some May hockey this year, but we’re playing all 58 games.”

Proulx said several other communities have already opened their rinks, potentially allowing their players to get an edge on practice time, but the home team has found a solution in the meantime.

Proulx said that until the Mel Hegland Uniplex is available, the Ice Wolves will use the rink at the Lac La Ronge Indian Band's Jonas Roberts Memorial Community Centre (JRMCC).

“The Ice Wolves are back. We are hungry, we are ready and we want to do it all in a safe way,” Proulx said.

Coach Kaminski agrees. “We have all got to come together as a league and as small communities and really support the teams this year. We don’t want to see any teams folding. I think every team is struggling.”

The team plans to run its yearly hockey school at the JRMCC from Aug. 31 to Sept. 3 and to start training at the La Ronge rink on Sept. 18.

“That weekend will be all scrimmages… You can only have 14 on a team because of the restrictions in numbers,” Kaminski said.

“Friday, Saturday and Sunday, the kids have to show their stuff to keep advancing. We’re going to make cuts over the weekend and keep the guys around who we feel have a good opportunity.”

The target date for a start to the season is Oct. 9, pending word from the league and Saskatchewan’s health authority.