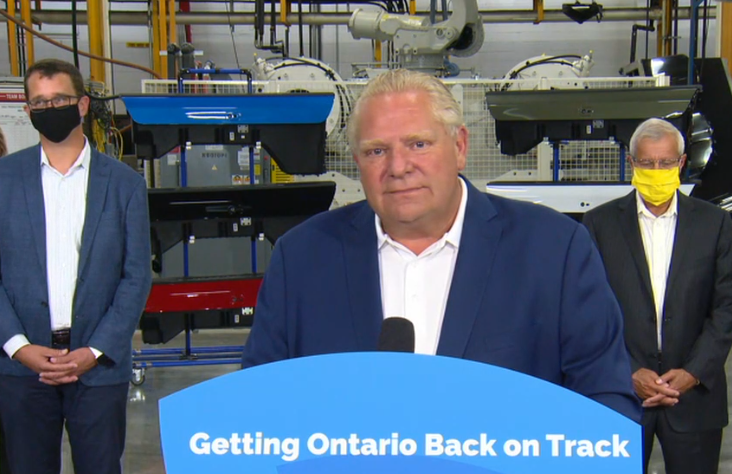 Unions representing Ontario's school teachers will each file a complaint with the province's labour relations tribunal over what they say is the provincial government's failure to take “every reasonable precaution” to protect education workers with its back-to-school plan.

The escalation of their dispute with the government comes after a meeting last week between Labour Minister Monte McNaughton and the heads of the four unions representing 190,000 teachers and education workers in public English-language elementary and secondary schools, Catholic schools and French-language schools across the province.

In that meeting, the unions say they asked for assurances that class sizes would be capped at 20 students and that no one attending school in-person comes into contact with more than 50 people, as well as adherence to ventilation standards and the ability for school boards to delay reopening until it is safe to do so.

While secondary schools are largely being restricted to 15-student classes conducted part-time, elementary schools will retain their pre-pandemic sizes, which means an average of more than 24 students in grades 4 through 8, according to provincial guidelines. Teachers have taken to social media to say they often teach more than 30 students seated less than two metres apart.

The unions say the demands are in line with measures put in place in other workplaces and public spaces in Ontario.

“Smaller class sizes would help make schools safer," Sam Hammond, the president of the Elementary Teachers’ Federation of Ontario (ETFO), said in a joint statement with the other unions.

"Should teachers and education workers not be able to expect at least the same standards and precautionary measures as have been put in place in stores, offices and other spaces across the province?” he said.

Premier Doug Ford, asked about the legal move, portrayed his government as having given the unions everything they sought.

'I don't want to fight with you'

He sought to portray the teachers' unions as at odds with the feelings of individual teachers, and contrasted their complaints with the heroic efforts of health-care and other front-line workers.

“At the peak of this, and it was running rampant, PSWs (personal support workers) walked into long-term care homes like firefighters walking into a burning building, and they don’t say a word, they’re heroes,” Ford said.

“The front-line health-care workers are heroes, the doctors are heroes, how about the grocery store clerks at the peak of this checking out hundreds and hundreds of people.

The provincial Greens said they stood in solidarity with the teachers and education workers taking legal action, and said the Ford government was seeking to vilify the unions “for refusing to encourage their members to run into a burning building without complaint.”

“Despite the Ford government’s persistent attempts to divide education and support staff and put the blame for the division at the feet of the unions, Ontario’s education workers have banded together to stand up to the Premier’s flawed and reckless plan,” the party’s deputy leader, Abhjieet Manay, said in a statement.

He challenged Ford’s assertion that his government had done everything asked of it, saying the Progressive Conservatives had refused to mandate smaller class sizes and ignored the advice of health and education experts.

They say they are reflecting the widespread concerns of their members as well as parents and others.

“The anxiety Ontarians are feeling around reopening schools is directly related to the government’s lack of leadership and their haphazard, incomplete planning,” said OECTA President Liz Stuart. “The Premier and the Minister of Education say they will do everything possible to make sure schools are safe. All we are asking is that they make an honest, exhaustive effort to follow through on this promise.”

We tried that all damn summer. Their idea of ‘working with us’ is agreeing to every lame thing they want to do. Enough is enough. If the government won’t set the stage for a #SafeSeptember for all we will fight for it. https://t.co/yvTBnzZl9S

“The accusation that teachers and education workers are not willing to step up and get back to schools is preposterous and insulting,” OSSTF president Harvey Bischof said. “No worker in the province of Ontario should be expected to sacrifice their health and safety, especially when there are such obvious measures the government could be taking to reduce the risk and prevent potential tragedies.”

McNaughton, the labour minister, said he would ensure that workers are safe from workplace hazards, including COVID-19, and that his ministry has been in touch with every school board in the province and is training both school boards and staff on how to be safe at school.

“This is no different than our work with employers of the millions of Ontario workers who remained on the job during the pandemic, as well as those who have since returned to work,” he said in a statement.

"In every case, including construction sites, supermarkets, retailers, manufacturing and more, workers, industry, labour and government worked together to create safe workplaces," he added. "That spirit of cooperation was effective."

Editor’s note: This article was updated at 5:19 p.m. on August 31, 2020 to include reaction from the Green Party of Ontario and tweets from a teacher and an advocate

"we gave them ventilation".

"we gave them ventilation".
Would some reporter, any reporter please ask him to give specifics of what that means , as in have you installed high quality air exchange systems in all classrooms and common spaces for the 4,800 schools in the province in one week? Because that has to be a lie on Trumpian scale, given the cost and complexity of such an undertaking in any school anywhere.
simply put, it is not credible. the backlog for fixing schools put off for 15 years, has reached $15 Billion for Ontario: mould, poor air, no windows that open, lead pipes, bathrooms with sinks falling off the walls,leaking roofs ( teachers bring their own buckets), etc.

My hubby and I joke that if they "fixed" everything it must mean they came in with sledge hammers, bashed a hole to the outside in each classroom and put a Can Tire fan into it blowing in or out. DONE! once we get to winter.......
I am sure the principal will monitor no more than one other person in HIS/her office and two m. away, but in an english class of thirty five--- not POSSIBLE.
As Rick Salutin said, the old union bashing Doug is BACK!,,,,,! Private schools for the rich, here we come!