It's time for a new Canada Day 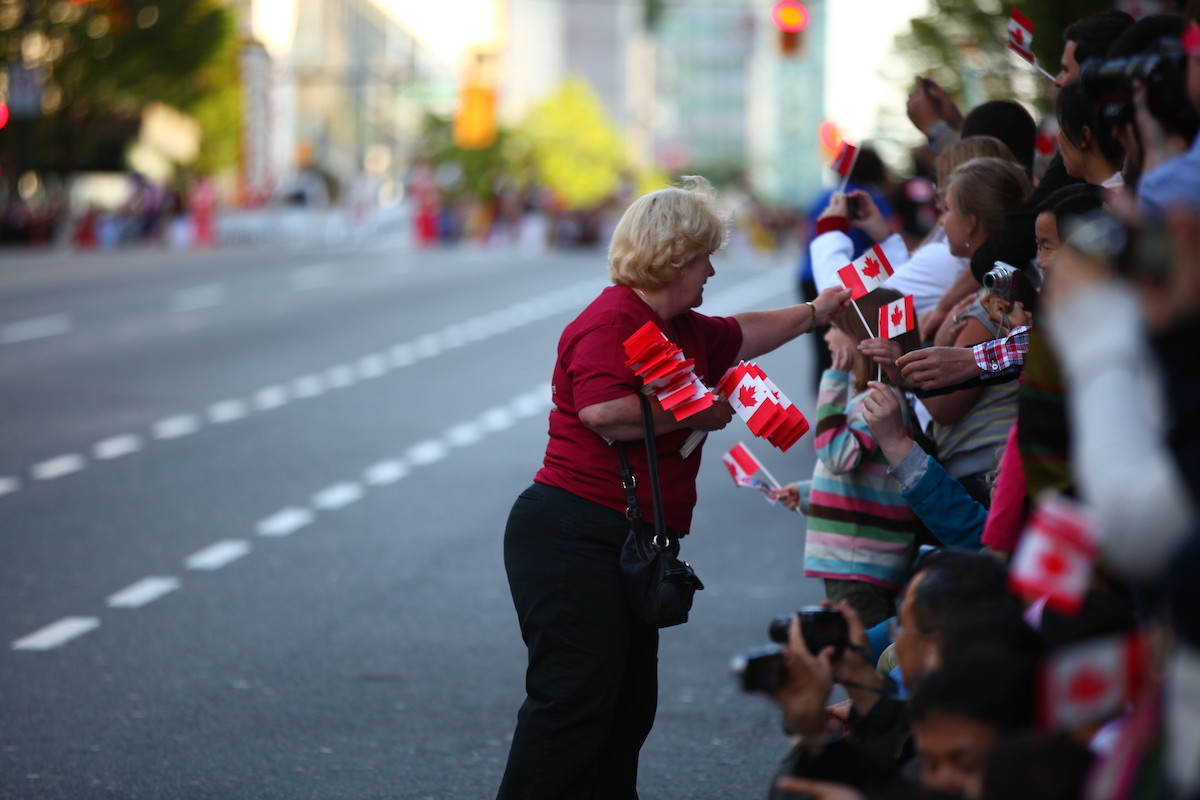 A woman hands out Canadian flags to spectators at the Canada Day parade in Vancouver in 2012. Photo by GoToVan / Flickr (CC BY 2.0)
Previous story
Next story

If Erin O’Toole wants an explanation for his pitifully low personal approval numbers, he should look in the mirror. After all, in the wake of the discovery of 751 unmarked graves on the site of a former residential school in Saskatchewan and renewed calls for justice and reconciliation across the country, the Conservative leader went to bat for Canada Day.

“As someone who has served Canada and will soon ask for the trust to lead this country, I can’t stay silent when people want to cancel Canada Day,” he said.

In the annals of failed room-reading, this might be one of the best (or worst) examples yet. After all, if patriotism is the virtue of the vicious, as Oscar Wilde once said, then that’s particularly true in Canada right now. The discoveries in Saskatchewan and Kamloops will not be the last of their kind and should prompt a much different kind of mood on Canada Day this year — one that has no place for the usual celebrations of expressions of national pride. Already, 50 municipalities in 10 provinces have cancelled their planned Canada Day festivities, including Victoria, Vancouver, Fredericton and Thunder Bay.

O’Toole isn’t the only leader who’s misreading the room right now, though. Prime Minister Justin Trudeau, who usually gets these things right (thanks in large part to his much-maligned background as a high school drama teacher), is in danger of getting it wrong. Yes, he put out a thoughtful and empathetic statement, and he hasn’t blundered on about how the real victim right now is our national holiday.

But while there are few governments better at apologizing for things than our current one, apologies aren’t going to cut it here any more. Marion Buller, the former chief commissioner of the National Inquiry into Missing and Murdered Indigenous Women and Girls, was clear about that. “It’s a nice statement,” she told CBC News Network. “A very well-crafted statement of sympathy and empathy but there’s no action there.”

Apologies for things that happened in the distant past are very different from ones that cover wrongs still happening in the present. That’s why we need to do more than just keep saying that we’re sorry. We need to show it, with actions and deeds and decisions that meaningfully improve the lives of Indigenous people. That means holding a judicial inquiry into what happened on the sites of Canada’s residential schools, and determining whether they were, and are, crime scenes. That means implementing as many of the outstanding calls to action from the Truth and Reconciliation Commission’s report as quickly and transparently as possible.

It also means sending Minister of Crown-Indigenous Relations Carolyn Bennett packing for the thoughtless text she sent Jody Wilson-Raybould. It may have been the product of long-running animosity between the two politicians, but none of that matters in the current moment. What matters is the message it sent to thousands of Indigenous Canadians about their relationship with this federal government, one that cannot be overlooked. They need to see that there are consequences for this sort of behaviour.

What can the rest of us do? For starters, we can all reassess what Canada Day means, both to us and the country we share. Canadians have always had a different relationship with patriotism than our American cousins, and we’ve always been more careful and cautious about celebrating our past. But while Canadians may not be as aggressively proud as Americans, we’re often guilty of getting dangerously smug about our standing in the world. Now, with the New York Times and other global newspapers reporting on the discoveries of unmarked cemeteries and mass graves at former residential school sites, we’re going to have to rein that in.

We should be doing a lot more than that, though. And Canada Day is the perfect time and appropriate place to start charting a course towards genuine reconciliation. Those who want Canadians to reflect on our shared past as it actually is, rather than some idealized or sanitized version, aren’t trying to “cancel” the holiday. Instead, they’re trying to infuse it with some actual meaning, one that goes beyond some fireworks and easy patriotism.

Understanding the full scope of Canada’s past, good and bad, doesn’t dishonour the sacrifice of those who fought to defend it. It doesn’t discredit the work of legislators and community leaders who helped build the institutions and ideas we take pride in today. And it doesn’t diminish the “true patriot love” that millions of people understandably feel for our country.

But we need to summon the courage to look directly at that past, and see it for what it is, not what we might wish it had been. There’s no better time to do that than Canada Day — especially this year. If Erin O’Toole wants to salvage what remains of his personal popularity, he might want to start leading by example here.

For most of the European

For most of the European Canadians, Canada Day is a celebration, of sorts, for the final triumph of the Colonialist conquest of the Canadian Land Mass. We had beaten back American expansionism (though it has always remained a threat), we were making good on the "from Coast to Coast" boast, we considered ourselves part of the glorification of the British Empire . what more could a young nation want?

Well, as it turns out this not so young nation is having to reckon with all its past delinquencies, its ongoing exploitation and destruction of the land "God gave to Cain". Colonialism leaves in its wake the bitter taste of crimes committed for which no atonement has ever been made.

Canada did not make the mistake of trumpeting its "christian" values as the U.S. has always done. We had too much internal strife over religion. Catholic French vs Protestant Anglo, Orange lodges wreaking havoc on Catholics, both persuasions vilifying Jews, and the "yellow peril"; profiteers playing one against the other, and driving the economy in the direction of facism and extreme capitalism. The sins are manifold. The Reckoning is protracted, and too slow in unfolding; largely because real reckoning is going to upset the economic stranglehold the heirs of colonialism/capitalism have on our politics and our power structures.

This year, what "white" Canada has always known (sort of) but denied by ignoring, is being discovered as proof positive of the crimes of neglect, the results of intentionally genocidal federal policies. Initially these policies were cloaked in benign pseudo-religious dogma. The real agenda was there for anyone to see - had they wished to. Indigenous children would be educated to eradicate their "indianess" . Their education would turn them into good servants of the nation.

As always, "brain washing" did not work. Its failures and atrocities have been laid bare to the public gaze - in ways that only the bigots, the unrepentant racists continue to deny.

This year, every Canada Day Parade, should be preceded by the mourning procession of the indigenous peoples - whose precedence in the New World can no longer be denied.

If we ultimately manage to salvage this continent for humanity it may only happen because enough of us honour this land by coexisting with it as our First Nations did in the past, and continue to try to do in the present.

At the same time let us not

At the same time let us not forget who managed the debacle that directly or indirectly lead to the deaths of a considerable number of children and not blame the country as a whole.