‘We can’t truly have reconciliation until we have that truth’ 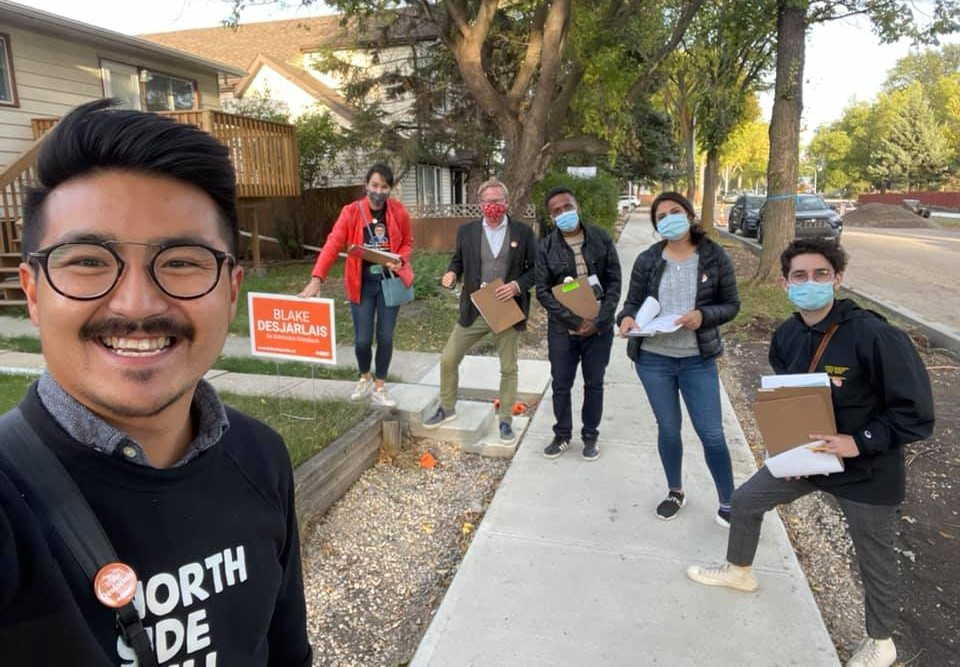 Blake Desjarlais of the NDP is the newly elected MP for Edmonton-Greisbach and the first two-spirit person to sit in the House of Commons. Photo via Blake Desjarlais / Facebook
Previous story
Next story

As Canada marked its first National Day for Truth and Reconciliation on Thursday, two of Canada’s newly elected Indigenous MPs reflected on what the federal government — and all Canadians — can do to further reconciliation.

“We can’t truly have reconciliation until we have that truth,” he said.

The National Day for Truth and Reconciliation coincides with Orange Shirt Day, which honours the story of Phyllis Webstad, a young girl whose new orange shirt was stripped from her on her first day at St. Joseph’s Residential School in 1973. On Sept. 30, 2013, Webstad spoke publicly about her experience, and Orange Shirt Day was born.

The federal statutory holiday was established after ground-penetrating radar uncovered the remains of 215 children at the former Kamloops Indian Residential School, confirming what Indigenous people have known for decades.

“The amount of pain in the Indigenous community is massive, we're only scratching the surface,” said Desjarlais, the newly elected MP for Edmonton-Greisbach and the first two-spirit person to sit in the House of Commons.

Desjarlais said he spent much of the day with his family in deep reflection because his mother was a victim of the Sixties Scoop, his biological sister died in her early 20s after being taken by child and family services at a young age, and his uncles never returned home from residential school.

He said his mother always imagined “a world where they ran away, and that they just never were found, and they lived a great life overseas.

“For so long, Indigenous families have told ourselves these stories,” said Desjarlais. “But … we now know where they are.”

To him, the National Day for Truth and Reconciliation needs to go further and should involve Canada’s top officials taking a sombre moment with the whole country and “leading by example and showing folks exactly what we should be doing (to mark the day).”

Newly elected NDP MP Lori Idlout for Nunavut said she spent the day marching through the streets of Iqaluit for a National Day for Truth and Reconciliation event.

“I was very proud of the city of Iqaluit for such a huge turnout, to show so much support for the children (who) were found in graves where they shouldn't have been,” said Idlout. “I have a sense of hope in knowing that more Canadians will realize how important it is to acknowledge the traumas and the tragedies that were forced upon us.”

She said “too many” Canadians still don’t know how awfully Indigenous people were treated and still harbour racism towards them.

Looking forward, Idlout said people in her riding want her to ensure Inuit and Nunavut communities are part of the decision-making process to address issues like mental health, poor housing conditions and shortages, and water quality.

Idlout said her goal in the House of Commons is to bring back the necessary resources to address these issues and further reconciliation.

The discovery of unmarked graves earlier this year at former residential schools serves as a reminder of colonialism, said Liberal MP Dan Vandal, former minister of northern affairs, in a statement to Canada’s National Observer.

In his statement, he noted the passage of Bill C-5, which designated Sept. 30 as a federal statutory holiday in line with the Truth and Reconciliation Commission’s 94 Calls to Action.

“I will be marking this important day through personal reflection and by honouring the children taken from their families and sent to these institutions, some of them never to return home,” it reads.

“Reconciliation with Indigenous (peoples) is about relationships, partnerships, and providing resources needed to build a new relationship based on respect and affirmation of rights. We encourage Canadians everywhere to continue to listen, learn, and take actions every day to drive transformative change.”

Métis Conservative MP Adam Chambers was elected in Simcoe-North. He declined Canada’s National Observer’s interview request, writing, “At this time, I would prefer to provide more space to others with more lived experience than myself. I am early in learning about my own heritage, and feel it would be more appropriate to yield the floor to others.”

Over the next few years, Desjarlais hopes both the truth and Indigenous voices will be heard, and he aims to help make that happen.

“I do hope that in any way, shape, or form, I can play at least a small role in advancing truth before reconciliation,” he said. He plans to do this by contributing his voice to the discussion and focusing on anti-poverty work.

Desjarlais said his riding is dealing with huge issues tied to reconciliation, like poverty, houselessness, systemic racism, and opioid-related deaths, many of which are being exacerbated by COVID-19.

“Even though we're a G7 country, one of the wealthiest in the world, we still often hear: ‘Are these people worth social support?’ And that question breaks my heart because I meet with them every day and I know they are,” said Desjarlais.

“A lot of folks I know are in tremendous pain right now dealing with the memory of their children, or their brothers, their sisters, or even themselves,” he said. “And we truly do need Canadians to be far more compassionate than they have been.”

He said the real call to action over the next several National Days for Truth and Reconciliation will be how much Canadians listen to what Indigenous people are saying.

In Ottawa, first National Day for Truth and Reconciliation honours survivors, those who never came home

There is more to truth than

There is more to truth than oft-repeated accusations. Despite the efforts of the TRC, the complete story of the Indian Residential Schools has yet to be told to Canadians. And the falsehoods ("150,000 Indigenous children were forcibly removed from their homes" is just one example) need to be corrected. Good journalists dig for this sort of clarifying information.

If we want the truth, we can

If we want the truth, we can't keep ignoring the missing and murdered indigenous men and boys, who are twice as numerous as the women and girls.