Mood in the streets is for bold climate action. Are world leaders listening?

By Bruce Lourie | Opinion | November 10th 2021
#81 of 99 articles from the Special Report: COP26: Uniting the World to Tackle Climate Change 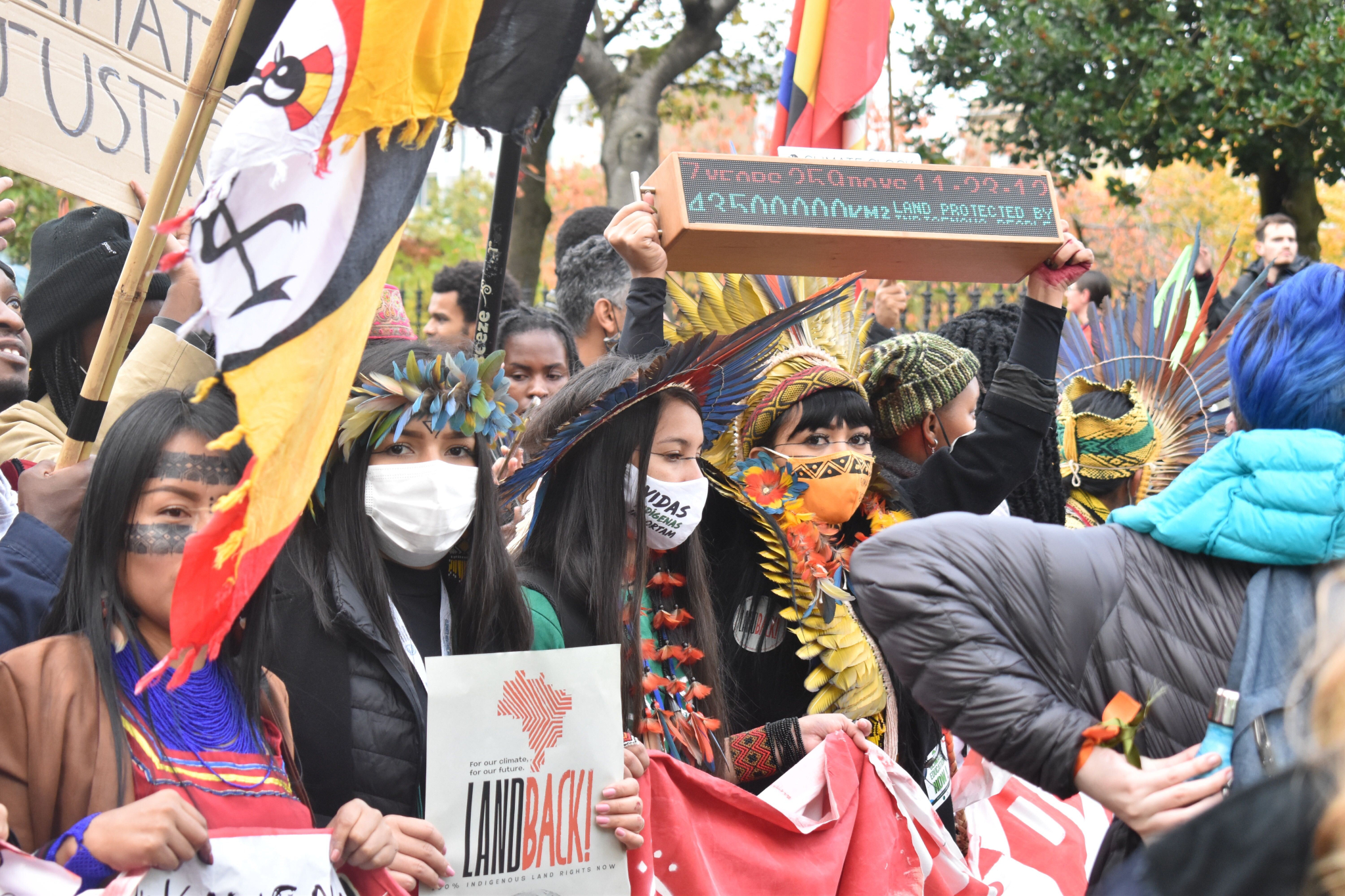 Protests on the streets of Glasgow during COP26. Photo by Nora Legrand
Previous story
Next story

There is a fascinating conundrum regarding the United Nations climate process and COP meetings on now in Glasgow.

On the one hand we recognize the need for nations of the world to come together to solve the global climate crisis because it requires a global commitment to action. Yet on the other, the greater the number and complexity of political interests at the table, the harder it is to reach consensus on meaningful action. Does that mean COP — short for conference of parties signed on to the UN's climate policy framework — are doomed to failure?

An often-posed question here in Scotland is whether the COP26 meetings have any potential for success in saving humanity from itself. It is too early to be declarative, since Week 2 is not yet finished, and of course the answer depends on being specific with respect to “successful at what”?

However, I am offering up my own early thoughts based on attending the COP26 Week 1 events in person, participating in the protest march (absorbing the great many messages), speaking to delegates and reading reviews from a wide variety of perspectives.

I am also writing as a climate and energy policy practitioner active in this endeavour for nearly three decades. I've attended only one other UN climate summit, the COP11 session in Montreal. I am therefore not a COP aficionado by any stretch, and I am coming to this with a healthy degree of my own skepticism. With that, here are some COP26 reflections.

Starting first with protest marches, since we always need society pushing the political and economic system hard, one could not help being drawn to the vastness and the variety of the people marching in the streets, despite inclement weather. Elementary school kids, grandmothers, activists, families, Indigenous peoples, socialist party members, doctors, vegans, and everything in between and beyond (although I did not see any bankers).

The marches were big, fun, positive and a legitimate reflection of both the need to act and the frustration with the pace of change. Successful, I would say, in terms of size, diversity and the positive “vibe” of the people. And while it is hard to judge the extent to which politicians or oil companies in large emitting countries pay attention to protestors in the streets of Glasgow, they certainly helped propel the messages of urgency and equity, setting a powerful backdrop to the ponderous panel presentations.

The negotiations and related announcements are perhaps the most concrete measures from which to determine success. And from the general buzz, it seems that most people are pleasantly surprised by what has been announced so far, including the Canadians. It is worth noting that general expectations were quite low heading into this COP meeting, so the positive reaction is somewhat relative to low expectations.

Opinion: This may be the first UN climate conference where the end of oil burning was an open and obvious notion across a wide spectrum of people, writes @brucelourie. #COP26 #COP26xCNO #FossilFuels

The overall tone from Canada was set with Prime Minister Justin Trudeau’s opening remarks committing Canada to putting a cap on greenhouse gas emissions from the oil and gas sector, with a schedule on how and when to begin decreasing emissions coming soon.

This publication has covered the specifics of many of the Week 1 announcements, so I will not repeat the details. The big ones involving Canada include the agreement to stop and reverse deforestation, an affirmation of the Powering Past Coal Alliance goals, and the one that perhaps surprised climate policy advocates the most, Canada joining the pledge to end public financing of foreign fossil fuel projects by the end of next year. An ambitious and important action.

I imagine we will see more commitments this week. Canada is clearly playing an important role, not as a political powerhouse, but as a genuine contributor to the sense of progress, made all the more significant given our substantial oil production and export economy.

Protests and politics aside, the part of COP that provides the greatest sense of optimism is the “pavilion” area, where individual countries, NGOs, businesses, and associations have elaborate trade-show-style information booths, some with full-time espresso baristas (thank you, solar industry). The pavilions provide COP delegates with an opportunity to learn about the climate change policies and programs of the host organizations, with seemingly non-stop live presentation panels and extensive video and other information displays.

Talking about the end of oil

Wandering through the very busy hallways of the pavilions one is left with the feeling that if all the collective effort of the countries and people in this enormous room were unleashed, the world surely could tackle the climate crisis. With the critical implication then being how do we ensure that this energy is unleashed, as opposed to trampled on. One can only hope that this is a sign of advancing momentum.

I sensed that this may be the first COP where the end of oil burning was an open and obvious notion across a wide spectrum of people. Climate activists have been saying it for years, and while the pace has clearly been too slow, yet the assumptive backdrop of many conversations was the end of oil. And sooner than we think.

I am sure this prompted several Canadian oil and gas industry groups led by the Canadian Association of Petroleum Producers (CAPP) to join a half-dozen of their international colleagues (Africa, Croatia, Mexico, etc.) to issue a statement on the necessary role of oil and gas in meeting the Paris targets.

Meanwhile, Fatih Birol, head of the International Energy Agency (IEA), summed up the week’s pledges and commitments saying that if implemented (a monumental “if,” to be sure), the world was now on track for 1.8 C of global warming. The Paris Agreement set out to keep global warming below 2 C, ideally not more than 1.5 C, and up until now I have not seen any credible estimate showing that we would succeed in meeting the “well below 2-degree” target. And to be in the room to hear the historically conservative and well-regarded IEA boasting so positively with this analytical news flash, one could not help but be somewhat buoyed.

Adding these disparate bits of a motivated public, meaningful actions by countries, the technological and policy innovations on display, and the encouraging analysis from the IEA, one cannot help feeling somewhat optimistic.

Let's return to the question of “successful at what?” With these measures it seems fair to say that COP appears to be on a path to success. It is hard to imagine that it will be deemed a failure.

It may be another 15 years before I return to a COP meeting, at which point I will have a much better vantage point to pass judgement. In the opening words of UN Secretary-General António Guterres, "Our addiction to fossil fuels is pushing humanity to the brink. We face a stark choice: Either we stop it — or it stops us. It’s time to say: enough."

Let’s see if that message carries weight through to the conclusion of COP.

Bruce Lourie is president of the Ivey Foundation and co-author with Rick Smith of Slow Death by Rubber Duck: How the Toxic Chemistry of Everyday Life Affects Our Health.

Pressure is on Alberta and everyone else too at COP26, province's representative admits

Thank you for this perspective. Fingers crossed...

Woah! Whoah!! Hold your horses.
All we've got so far is nice talk. Do you have any example at all of Canada or the provinces committing to a cimate strategy, and then making it happen?
Yep, Quebec's done quite well, and Ontario prior to Ford (Toronto both prior to and since the Fords), but wherever you look, there are uncounted carbon emissions ... unacknowledged methane release, various (far from necessary) toxics from everyday products and activities ...
And wherever you look, ever more puppies in the neighbourhood. Including vegans feeding their dogs "pure meat."