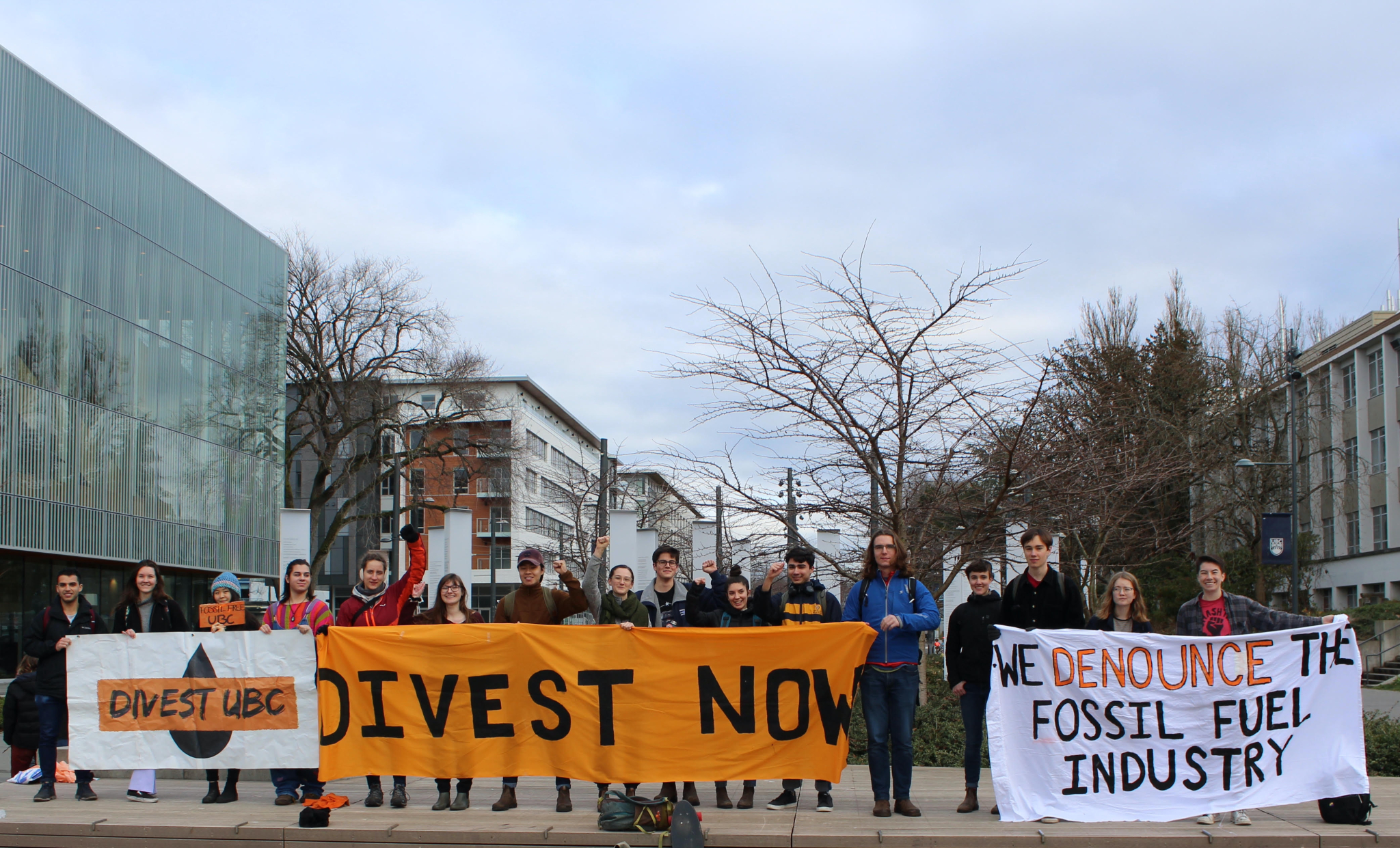 After eight long years of organizing by the students of SFU350, Simon Fraser University finally committed to full divestment from fossil fuels on Nov. 1. The announcement comes two years after the University of British Columbia committed to divestment in response to a similar six-year-long student campaign.

From a fledgling movement a decade ago to one seeing institutions as big as Harvard University and Canada’s second-largest pension fund join in, we’ve come a long way in stigmatizing the fossil fuel industry and building the political will necessary to achieve climate justice.

But as we’ve looked at our universities’ investment portfolios, we’ve realized divestment is not enough to bring us to the just and sustainable future we want and need. Fossil-free funds are loaded with banks that lend trillions to fossil fuels, tech companies like Amazon that have been called out for reports of abusive working conditions and tax avoidance, and mining companies that have been linked to murders and assault of land defenders around the world.

That’s why we are launching the Towards a People’s Endowment Campaign, which calls on UBC and SFU to take the next step and actively reinvest in our communities. Community reinvestment means investing capital — often from funds that have divested from fossil fuels — into projects that provide social and/or environmental benefits to local communities. Community reinvestment prioritizes meeting community needs, while still generating modest returns for investors.

We all know our communities are hurting. The pandemic has piled on top of long-existing conditions of social neglect, ranging from the opioid epidemic to ballooning wealth inequality, a housing and homelessness crisis, and brutal policies of systemic racism and colonial violence.

The climate crisis adds to all of this, putting many in a regular state of uncertainty and precarity while endangering the most vulnerable. The heat dome, which killed 595 people in B.C. this past summer and recent catastrophic flooding are just a taste of what’s to come.

Our universities say they care about these issues. UBC has committed to the United Nations Declaration of the Rights of Indigenous Peoples (UNDRIP), declared a climate emergency and developed an Inclusion Action Plan and an Indigenous Strategic Plan.

SFU has also established an Aboriginal Strategic Plan and a Strategic Community Engagement Plan and recently signed onto the Canadian Investor Statement on Climate Change. The latter expresses support for a just transition to a net-zero economy that is informed by Indigenous perspectives, advances Indigenous economic opportunities, and encourages business practices that align with the principles of UNDRIP.

So rather than invest in the very corporations responsible for our pressing societal problems, why not invest in local community organizations that are trying to solve them? If UBC and SFU commit to allocating just 10 per cent of each schools’ endowment and working capital funds to community reinvestment in B.C., that would mean $400 million injected into the local economy, opening the door for new affordable housing projects, community-owned renewable energy, worker-owned co-operatives, social enterprises and sustainable local food systems.

For example, our universities could invest in affordable housing and green energy projects through Vancity Community Investment Bank’s Impact GICs, local businesses across B.C. through community investment cooperatives, and purpose-driven co-ops such as SolShare, which develops community-owned solar projects.

Rather than prioritizing short-term financial returns at the expense of our communities, these investments would contribute to enhancing the local community by creating jobs, strengthening local self-determination and building a vibrant social economy positioned to sustain future generations.

These funds could also be designated to support communities that have long been excluded and harmed by our financial system, including Indigenous, Black and racialized communities, the poor, people with disabilities, and immigrants.

It will be critical that these investments are non-extractive. This means social purpose must be prioritized over financial returns, and organizations should have enough money left over after paying interest to grow their organization and build wealth in their community. In doing so, we can shift economic power and equitable forms of ownership into the hands of the people.

Community investing is not a new concept — dozens of universities in the United States have already invested in community loan funds, community bonds and community development financial institutions.

For example, in 2017, in response to student advocacy, the University of New Hampshire invested $3 million in the New Hampshire Community Loan Fund, which provides loans, capital and assistance to underserved people.

Just a couple of years ago, the Concordia University Foundation developed an impact investing policy, committing to allocate 10 per cent of funds into impact investment, with a special focus on student-led social enterprises and local Quebec businesses.

We believe UBC and SFU can not only follow these examples but do better by including community members in the process and ensuring investments truly prioritize social purpose rather than financial return.

Our universities have a responsibility to serve the wider community. This is fundamental to their core mandates as public institutions and their stated missions to “advance a just and sustainable society” and be a world leader in community engagement. By choosing to invest intentionally in our local communities, UBC and SFU can take the next step in advancing real climate justice.