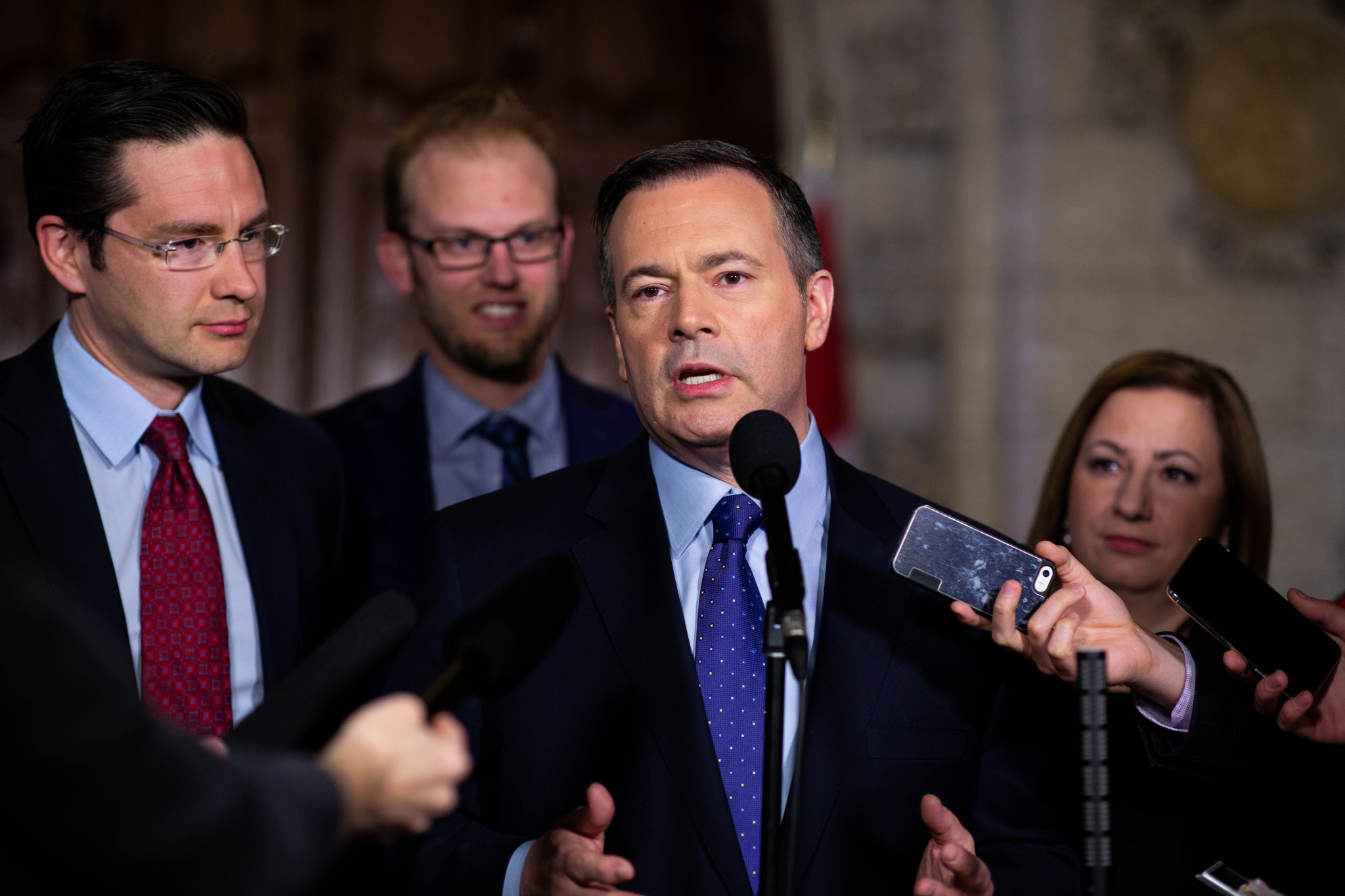 Despite a defamation lawsuit levelled against Jason Kenney and the provincial government, Kenney lashed out again at environmental organizations he says "have campaigned to landlock Alberta energy." File photo by Alex Tétreault
Previous story
Next story

Alberta Premier Jason Kenney is doubling down on his attacks against the environmental groups he misleadingly claims “campaigned to landlock Alberta energy” using foreign money, but environmentalists are quick to point out the majority of Canada’s oil and gas companies are quietly controlled by foreign corporations seeking to influence climate policy through lobbying and elections.

“The irony of this whole conversation is that the foreign money involved in the conversations about what we should do on climate change or not is, of course, dominated by oil money, most of which is foreign,” said Tim Gray, executive director of Environmental Defence, one of five environmental organizations suing Kenney and his government for misrepresenting the clear-cut findings of a provincial inquiry released last year.

The Kenney government’s two-year, $3.5-million inquiry into the foreign funding of environmental organizations found no “suggestion of wrongdoing on the part of any individual or organization.”

Gray said it’s hypocritical for Kenney and the oil industry to “[run] around screaming about small amounts of donations from U.S. or European foundations to Canadian environmental groups while at the same time receiving huge amounts of funding or being foreign-owned themselves.”

Kenney recently filed his defence to the defamation lawsuit — which will likely go to court — and continued to take aim at the environmental groups.

“I find it fascinating they're willing to dump millions of dollars into political and legal efforts to undermine Canadian energy exports and they're surprised when somebody shines a spotlight on their efforts,” Kenney said at a press conference in Canmore, Alta.

The inquiry found 31 Canadian environmental organizations received a total of $1.28 billion in foreign funding between 2003 and 2019, of which only $54.1 million — or roughly four per cent — was earmarked for “anti-Alberta resource development activity.”

When the inquiry’s findings were released in October, Alberta Energy Minister Sonya Savage stated its aim was to expose the influence of foreign actors over domestic policy.

If this is true, then the Alberta government should be deeply concerned by a recent report that found foreign corporations control the lion’s share of the oil industry and its profits and have “an outsized influence on policymaking,” said Gordon Laxer, the political economist who authored the report.

“I don't think most Canadians realize how much big foreign oil is blocking climate action,” said Laxer, who used ownership data from Bloomberg Professional Services and the Canadian Association of Petroleum Producers (CAPP) website to determine whether petroleum corporations in Canada are majority foreign- or Canadian-owned.

@JKenney recently doubled down on his attacks against enviro groups he claims “campaigned to landlock Alberta energy” using foreign $. Enviro groups say this is hypocritical, given the foreign funds that line the pockets of Canada's oil lobby.

"The majority of the oil companies operating in Canada — lobbying our governments every day, influencing policy — are foreign-owned, and the majority of profits for the exploitation of oil and gas in Canada leaves the country,” said Tzeporah Berman, international program director of Stand.earth, another organization behind the lawsuit. “What's actually happening … is the opposite of what Premier Kenney and the [Energy] War Room alleged."

Pockets of Canada’s oil lobby are lined with foreign funds

Because CAPP’s membership fees are based on oil production, an overwhelming majority of its revenue is fees paid by these foreign-owned corporations, Laxer says.

Kenney’s inquiry into the environmental groups assumes whoever pays the piper, calls the tune, and CAPP’s pockets are lined with foreign membership fees to lobby on behalf of these corporations, he said.

The report noted foreign ownership does not necessarily mean a corporation is foreign-controlled, but it does make it foreign-influenced and funded.

Laxer says people who hold at least one per cent of the stock in a corporation have the opportunity to speak to corporate managers and will push for their interests.

“So, you're having foreign shareholders deciding or at least having influence on Canadian climate and energy policy, and it should be Canadians doing that,” he said.

Between 2011 and 2018, CAPP was the most active petroleum industry lobbying association, and made contact with public office holders 1,268 times, according to a 2019 report by the Canadian Centre for Policy Alternatives. A more recent Greenpeace study found CAPP had 246 contacts with federal officials in the first year of the pandemic.

CAPP’s member companies produce about 80 per cent of Canada’s natural gas and oil, and it has the most in-house lobbyists of any fossil fuel organization, with 36, the Policy Alternatives report says.

CAPP enjoys access to federal officials that environmental organizations could only dream of, Laxer writes in his report, pointing specifically to “a secretive industry-government working group” that met weekly during the spring of 2020. One of the group’s stated objectives was to reduce operating costs and regulatory burdens for the industry.

“Those meetings influence policy,” said Berman. “The lobby is huge, it's unrelenting and it's weakening our approach to fighting climate change and slowing down our transition to greener jobs and a low-carbon economy.”

She says the effects can be seen in the weakened carbon tax measures and clean fuel standards and in the federal funding given to oil and gas companies as part of COVID response budgets.

“There's a general democratic principle today, in every democratic jurisdiction, that people there should be able to decide their future without foreign interference,” said Laxer.

Federal election law prohibits foreign third parties from participating in elections and states Canadian third parties cannot use funds for a regulated activity “if the source of funds is a foreign entity.”

However, foreign-owned corporations can get around this by simply listing their headquarters in Canada.

Because of this loophole in the Elections Act, CAPP was allowed to register as a third-party advertiser in the 2019 federal election and run ads and advocate on key issues. Though CAPP claims to be non-partisan, its president, Tim McMillan, introduced a panel on “paths to federal election victory,” and the association collaborated with federal Conservatives on a strategy to oust the Liberal government.

Third parties are allowed to spend up to $1 million in the pre-election period and up to $500,000 during the election campaign.

Making or publishing false statements during an election to affect the outcome is forbidden by the Elections Act, yet during the 2019 election, CAPP made two demonstrably false statements.

During the 2019 election, CAPP’s Vote Energy platform stated: “Canada’s only credible path to meeting its Paris commitments is through increased exports of Canadian natural gas.” It also wanted the government to “acknowledge that Canada’s oil and natural gas sector is not subsidized.”

Berman says CAPP is “using Big Oil’s money to distort the political process and ensure that profits continue to flow to a small one per cent who aren't even Canadian.”

“I think it's really important that Canadians realize that the oil corporations in this country are overwhelmingly foreign-owned and funded, and yet they wave the Maple Leaf flag, and they accuse environmentalists of being traitors… And it's a fraud,” said Laxer.

“Canadians need to understand what Big Oil is doing, and their campaign of deception and blocking real-time climate action.”

CAPP did not return Canada’s National Observer’s requests for comment.

This is an outstanding

This is an outstanding article packed with very informative references.

The report by Gordon Laxer is stunning because it dives deep into the details of just how egregious CAPP's massive influence on Alberta and Canada really is, something Sandy Garossino discussed in previous NO articles. It has an especially powerful bite on foreign interference in elections and government capture.

The CAPP board of governors represents an industry that is 63% fully or majority foreign owned. Some companies represented by CAPP have not quite enough data out yet, but their inclusion as likely majority foreign owned would push the foreign ownership to 77%. Think about that. This fact alone should drive a stake through the false narrative that Canadian environmental organizations are the puppets of foreign environmental organizations that want to shut down the Alberta oil industry, or are in turn somehow cynically employed by American Big Oil so they can gobble up Canadian Big Oil assets. Well, that was 'fait accompli' decades ago.

This also pushes both the Alberta and Canadian government's so-called climate action policies into the realm of willing participants in the corporate version of "climate action." Witness the latest bullshit on federal tax breaks for carbon capture / utilization espoused by two ministers who really do know better on a policy that CAPP has been pushing for years.