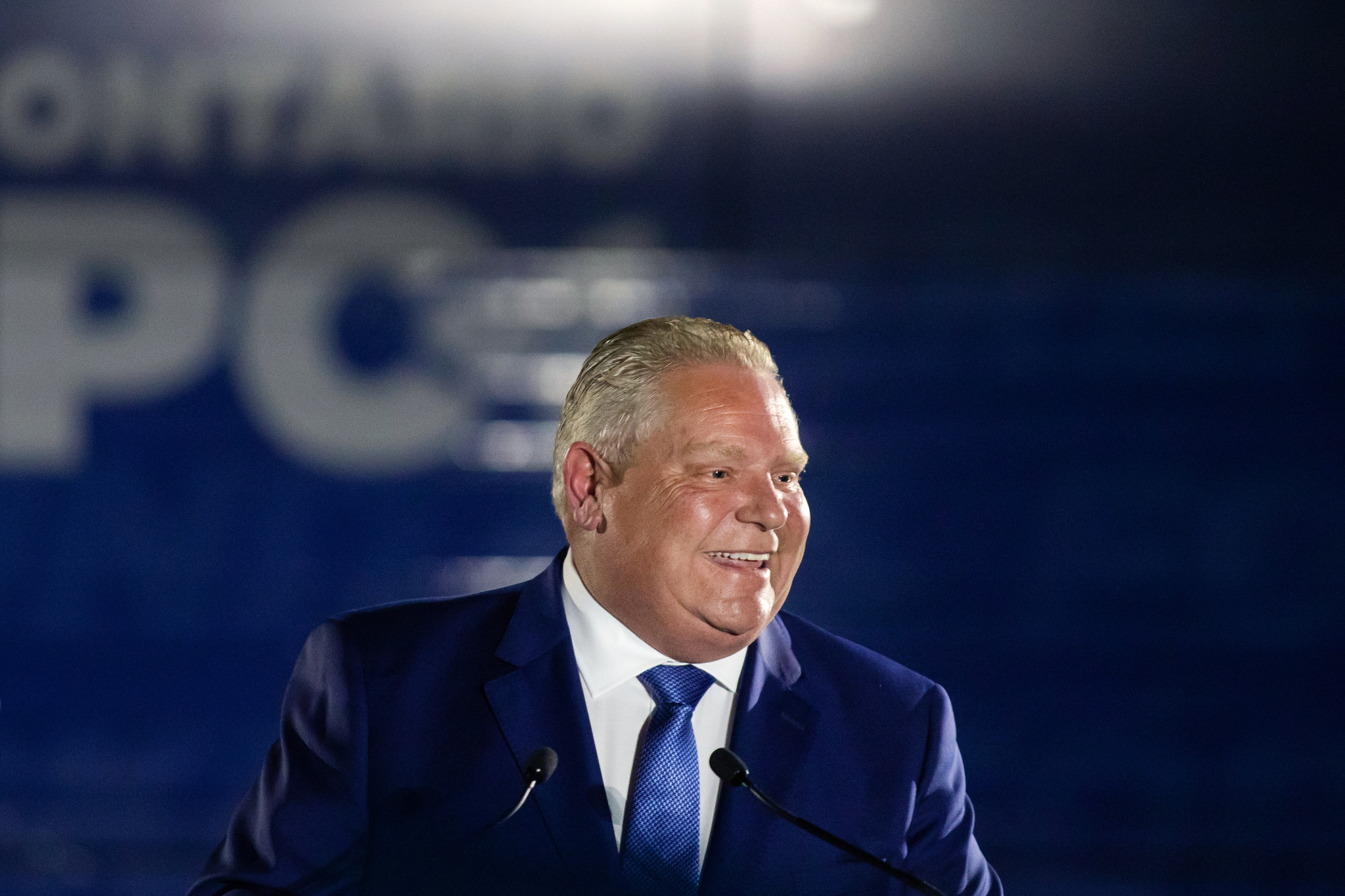 Ontario Premier Doug Ford, pictured at a rally earlier this month, has presided over the dismantling of climate programs that have cost taxpayers more than $10 billion. Photo by Nick Iwanyshyn / Canada's National Observer
Previous story
Next story

Ontario’s “extremely worrisome” recent track record on climate has cost the province nearly $10.5 billion in lost revenues, legal fees and compensation for cancelled contracts, according to a report released Thursday by Environmental Defence.

The financial price of the government’s climate policies stands in stark contrast to oft-touted Progressive Conservative promises to responsibly shepherd taxpayers’ money and kick the province’s economy into high gear.

The report, “Hot Hot Air (and other gases): A review of the past four years of Ontario’s climate change (in)action,” focuses on the climate policy record of Premier Doug Ford's government during its four years in office as the June 2 election approaches.

“This government has been disastrous,” said Keith Brooks, programs director at Environmental Defence, which has been posting a “daily recap of Ontario’s attacks on the environment over the past [four] years” on Twitter every day since the election campaign began May 4.

The Progressive Conservatives did not respond to a request for comment by deadline.

Ford, shortly after winning a majority at Queen’s Park in the 2018 election, scrapped Ontario’s cap-and-trade program, a move that cost the province more than $10 billion in budget impacts and lost revenue to date, according to the report.

“Ontario blew a multi-billion dollar hole in its budget, and missed out on billions more of revenue that Ontario could have directed to climate solutions, or other policy priorities,” it noted.

A subsequent legal challenge mounted by the province on federal carbon pricing — a battle it lost, negating any potential savings from cancelling cap-and-trade while foregoing revenues — cost Ontario taxpayers an estimated $30 million. The province is being sued for tens of millions more.

Ford’s cancellation of more than 750 green energy contracts, many of which were with First Nations, cost taxpayers $230 million.

As well, the Ford’s government’s 2018 Made-in-Ontario Environment Plan lowered the province’s 2030 emission reduction targets and lacked clear pathways to achieve them, the report noted. “The plan had major flaws, including back-of-the-napkin calculations that didn’t hold up to scrutiny.”

Ontario’s auditor general, in a 2019 report, concluded that plan was not supported “by sound evidence” and would not result in reaching the already weakened emission reduction targets. A 2021 update to that audit showed the government had only implemented 27 per cent of its recommendations.

Updated emissions modelling released in April is, according to the report, “scant on details and lacking in transparency, and many elements of that plan have not been developed with sufficient detail to enable anyone to assess their potential effectiveness, should they actually be enacted.”

The Ford government, after initial hostility to electric vehicles (EVs), has done something of an about-face, announcing investments in auto plants across the province to retool to manufacture EVs and hybrids with a goal of producing 400,000 per year by 2030. But that would still only comprise 20 per cent of the two million vehicles currently made in Ontario annually.

Uptake in the province has stalled since Ford scrapped buyer incentives shortly into his term. While Ontario was on par with B.C. and Quebec for new EV registrations in 2016, it now lags far behind: 13 per cent of new vehicles registered in B.C. in 2021 were EVs, while that figure was 9.5 per cent in Quebec — and 3.3 per cent in Ontario.

Climate change and environment have not figured largely in the election campaign so far, with polls suggesting many Ontarians are more concerned at present with skyrocketing costs of living and a housing crisis that has seen average home prices nearly double in just two years.

During a leaders debate on Monday, when asked whether he’d done enough to address climate change, Ford pointed to Ontario’s 94 per cent clean energy grid — largely the result of the previous Liberal government phasing out coal-fired power generation — and added that he wouldn’t be happy until it reached 100 per cent. The PCs have not offered any plan to do that.

Rather, emissions from the energy grid are expected to increase nearly threefold by 2030 as natural gas generators replace nuclear facilities scheduled for refurbishment or permanent closure.

Jason Kenney speaks out against Line 5 shutdown at Capitol Hill

finally!,, Dougie’s full frontal assault on efforts to slow climate change make the news!!!
his obstruction of ways to get off fossil should be framed as making our lives harder, meaner, sadder, more dangerous—- to benefit his fossil backers

We can't seem to get it

We can't seem to get it through our heads that for the most part, conservatives do NOT accept the fact that climate change is real, possibly because they make up the most fearful among us.
https://www.psychologytoday.com/us/blog/the-human-beast/201104/conservat...

I always hate it when

I always hate it when reporters make reference to a 'report' and either don't link the report, or provide a general link that doesn't take you to the report referenced, forcing you to have to dig around for it. For those interested, the Hot Air report can be reached directly at this link:
https://environmentaldefence.ca/wp-content/uploads/2022/05/Environmental...

Good summary, but these costs

Good summary, but these costs are just the tip of the melting iceberg. The bigger costs are lost opportunity in shifting to a low-carbon economy and the impacts of increased emissions, such as from new superhighways and using gas plants to replace the nuclear plants that are about to go off-line. These are not conservatives: they are ostriches.

Well so much for Ontario

Well so much for Ontario voters and non voters. It is shameful that Ford got such a large majority with such a low voter turn out. Why are people not paying attention to his record. It is shameful and destroying this Province and the environment. Don't complain if you did not vote or voted for this Government. You deserve what you get. Too bad we all have to suffer along with people who don't educate themselves about policies from politicians or their record.