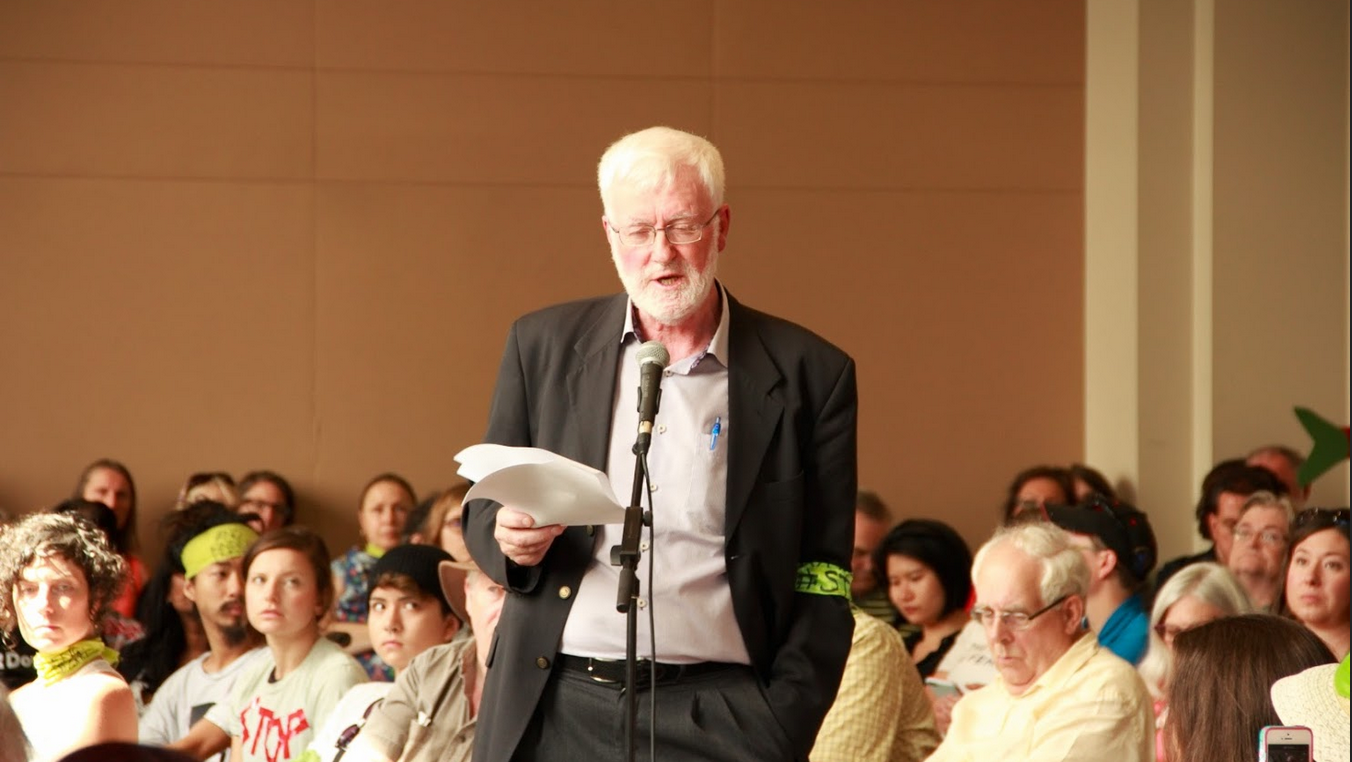 The outspoken LNG critic, who holds a PhD in chemistry and was once a partner at KPMG, pulled no punches in his verbal obliteration of the National Energy Board (NEB), its review of the controversial Kinder Morgan Trans Mountain expansion project, and the three-member panel appointed by the federal government to collect additional public feedback on all of it.

It was an impassioned mix of wit, science, and an undeniable flair for the dramatic.

"The NEB denied intervener status to hundreds and in the end, even resorted to locking the public out of public hearings," Finn said at a Vancouver consultation on the expansion on Wednesday afternoon. "In short, the NEB process is possibly the greatest farce ever inflicted upon Canadians, up until now."

"Shame!" shouted his audience. It was standing room only at the public town hall, where police were on hand to keep protesters under control.

While the national pipeline regulator failed to permit cross-examination of evidence, omitted climate change impacts and ignored major scientific studies during its assessment of the Kinder Morgan project earlier this year, Finn said the federal TMX panel appointed by the Trudeau government to conduct additional, meaningful consultation is a "slapdash reno job" whose "independence qualifications" are highly suspect.

Panelist Kim Baird, for example, has a past relationship with Kinder Morgan, the Texas-based oil giant proposing the expansion, and is currently a registered oil and gas lobbyist on the payroll of Woodfibre LNG, Finn pointed out. The town hall's participants promptly called for her resignation.

“I would argue this is simply unacceptable, an insult to the intelligence of Canadians," Finn told the panel. "It falls far short of what was promised by the federal government... this panel’s scope seems to accept that the rather ill defined, significant adverse environmental risk is an appropriate test for an environmental assessment."

The Trans Mountain expansion is a proposal to triple the capacity of an existing pipeline system by adding 980 kilometres of brand new infrastructure starting in Alberta. If the addition is green-lighted by cabinet later this year, it will transport 890,000 barrels of oil per day from the oilsands to refineries and terminals near Vancouver and Washington.

Although the project was recommended for approval by the NEB in May - subject to 157 environmental, technical and financial conditions - within months the federal government moved to address widespread concerns that the NEB review was a "sham" by appointing three independent panelists to collect additional public feedback.

No consent from B.C., say protesters

Finn's presentation was preceded by a mass protest on the streets of Vancouver, where municipal surveys have shown that roughly 80 per cent of residents oppose the project. In total, more than 20 municipalities and 17 First Nations have rejected it, despite Kinder Morgan's claims that it will contribute $46.7 billion in taxes and royalties to government coffers over 20 years, as well as creating 15,000 construction jobs per year during peak construction, and 37,000 direct, indirect and induced jobs per year of operation.

"Despite Justin Trudeau's rhetoric and his government's stated commitment to respect Indigenous rights and engage in a process of reconciliation, it's clear that the will of local communities directly impacted by this and other projects is less important than the profits of the oil and gas industry," said Eric Lescarbeau of Climate Convergence.

"Every step of the process has been about creating a picture of forward momentum and certainty for corporations while ignoring the need of certainty for everybody else about their local environment, their water and our climate."

Protesters presented panelists with more than 140,000 petition signatures from across Canada rejecting the pipeline, as they marched into the town hall waving banners and clad in costumes. The mood was jubilant as protestors sang and ate cupcakes.

"We are here to say to everyone inside, this community rejects the Kinder Morgan pipeline," said Leadnow climate organizer Mike Soron through a bull horn. "It does not have the consent of British Columbia. Truly this is the worst time in history to build a pipeline."

The federal panel will conduct four more days of consultation in Vancouver, North Vancouver, and Victoria before presenting its final report to the federal government in November. More than 400 people have spoken and 1,200 have attended meetings so far, nearly 90 per cent of whom have been opposed to the project, according calculations by Stand.

As Peter Newman used to say,

As Peter Newman used to say, "That is not news. But that, too, is reality".
The NEB just goes through the motions to appease critics and feign compliance with their publicized mandate.
Most recently (Charest/NEB/Energy East/TransCanada debacle) the NEB has been shown to be complicit in an incestuous intimate relationship with a pipeline company. This is most certainly a perpetuation of a devious and deceptive corporate culture parallelling that of the oil and gas pipeline companies they are to be "independent" regulators of. They ridiculously excuse their prejudicial behaviour with an "apology" . Mea culpa? That's it?

Yes, the NEB is one big farce. The Trudeau government now realizes they have a runaway train but they're going to install a hand brake that won't work .

The NEB's recent approval of the use of Corexit epitomizes irresponsibilty and their nonchalance regarding the environment and all living things. In the meantime, our lands, water, and environment are being destroyed to increase corporate profit.

The NEB is "NOT in the public interest".
Get rid of it.