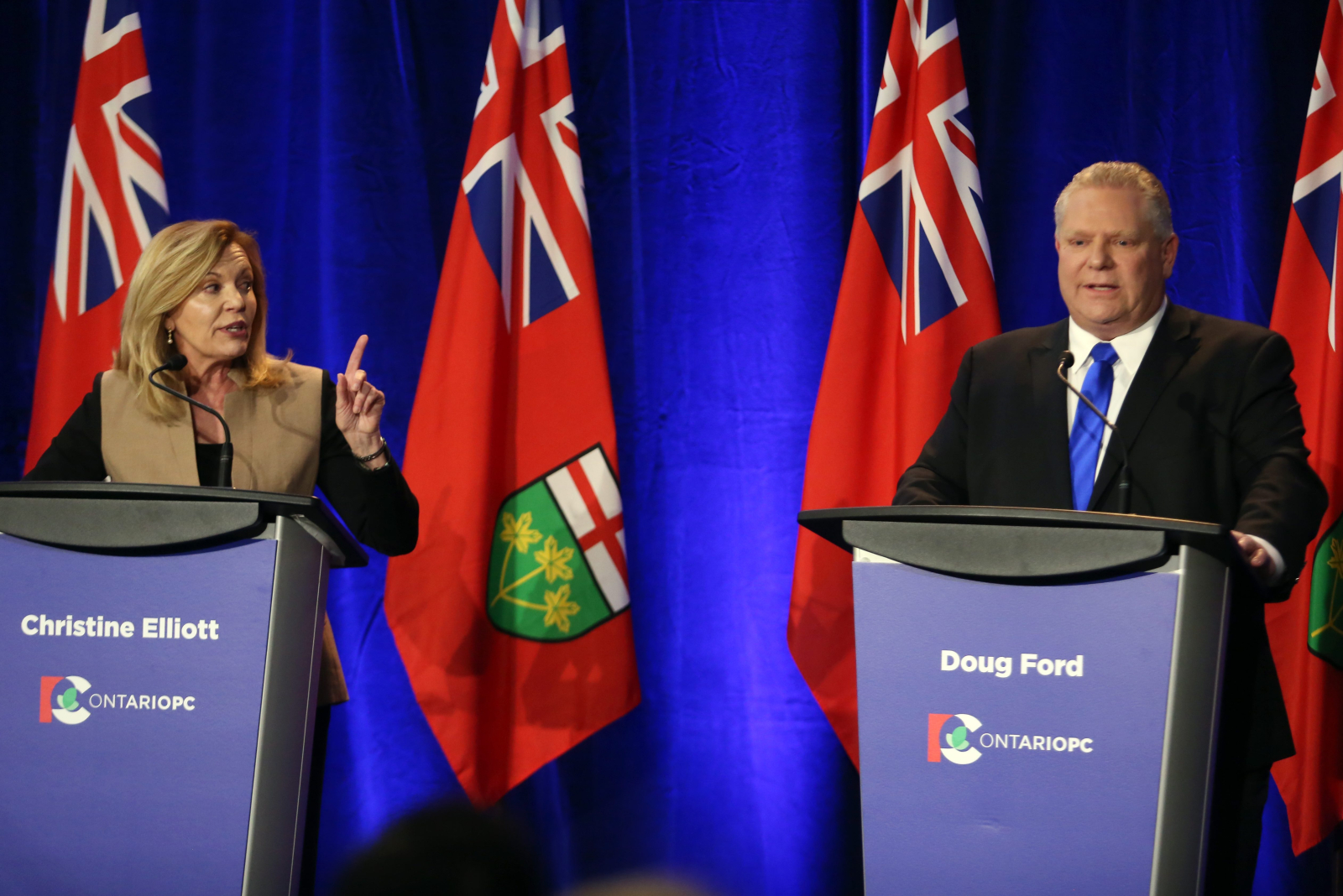 The newly crowned leader of Ontario's beleaguered Opposition is no longer being challenged by his main rival, who refused to concede for nearly a day.

Christine Elliott met with Doug Ford on Sunday evening to congratulate him on his narrow win in the race to lead Ontario's Progressive Conservative party.

In a statement acknowledging Ford's victory, Elliott said she conducted a review and is confident in the results of the race.

"The pace of this Ontario PC leadership race has been rapid and there have been a number of unexpected turns along the way. That is why our team took the last twenty-four hours to review the results of an election that was incredibly close," she said in the written statement.

"After completing my review, I am confident in the results. I extend my congratulations to Doug Ford on a hard-fought campaign."

Elliott initially disputed Saturday's results, alleging they stemmed from "serious irregularities" in the vote. Her campaign had also said that she garnered a majority of votes and had won a majority of ridings in the leadership race.

But Ford had brushed off her allegations, saying he was working on restoring unity within the party as it works to topple Liberal Premier Kathleen Wynne's government in a spring general election.

Elliott previously said she won the popular vote and the majority of ridings, and said thousands of party members were assigned to incorrect ridings during the voting process.

The party sided with Ford, saying his win was definitive. It noted that there had been an issue with the allocation of certain electoral votes but the matter was reviewed and resolved.

But in spite of Elliott's concession, uniting the party and making it appeal to a range of voters may prove a daunting task for Ford given his brash, often confrontational approach, which he displayed in his brief career in municipal politics and again in his leadership campaign, said Myer Siemiatycki, a political science professor at Toronto's Ryerson University.

"One doesn't exactly think of the Ford political brand involving bridge-building, reaching out to those who disagree with them to forge compromise or common ground," he said.

"The leadership style is very alpha and alpha male, and it remains to be seen how that will go over," he said, noting there is no reason to expect anything different now that Ford is at the helm.

Over the course of the campaign triggered by former Tory leader Patrick Brown's departure amid sexual misconduct allegations, Ford repeatedly vowed wrest control of the party from elites and give a voice to the grassroots members.

He also touted his experience running the Ford family's label-making business, saying it had prepared him to run an efficient government.

Ford further promised to scrap a proposed carbon tax that formed a key pillar of the party's election platform introduced in November under Brown, criticized the Liberal government's sex education curriculum and said he'd allow caucus members to vote with their conscience on policy matters.

His populist message and critique of the political establishment will likely win him some supporters, Siemiatycki said. But there is little to back up Ford's assurances that running the family business has prepared him for provincial politics, he said.

"If you go into government thinking that you're running just another business like your family business, that can really, really be problematic," in part because governments can't charge for services, he said.

The governing Liberals and the New Democrats have panned Ford as a step backwards for the Tories, accusing him of currying favour with the party's socially conservative elements.

"With the selection of Doug Ford, Ontario Conservatives have chosen corporate interests over workers, religious extremism over the rights of women, and cuts at the expense of our healthcare and education," the Liberals said after his victory was announced.

Ontario heads to the polls June 7.

I think it would be helpful

I think it would be helpful to readers to know the methodology used in the Leadership Election that led to the confusion and disagreement. If C. Elliott did win the overall vote and the majority of ridings, how could she not win? Was some form of ranking balloting involved, and, if so, what went wrong with it?