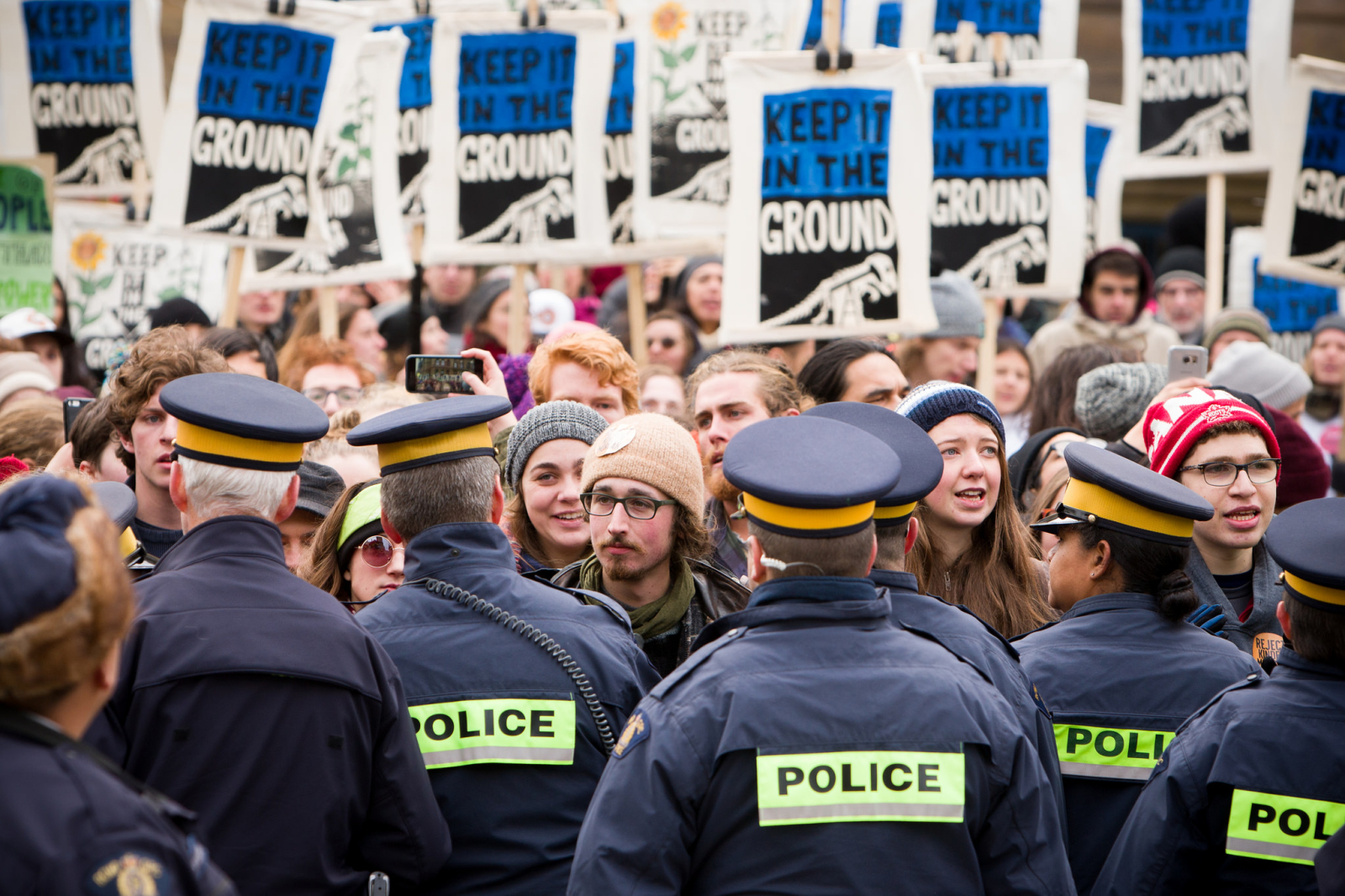 Roughly 100 students and youth from across Canada were arrested in Ottawa on Mon. Oct. 24, 2016 while protesting the Trans Mountain expansion. Photo by Robert van Waarden of Survival Media.
Previous story
Next story

As the world reaches a globally significant carbon emissions milestone, the sky is literally falling as a result of climate change, says a top scientist at NASA.

This year was the hottest year on record according to the World Meteorological Organization (WMO). The organization said globally averaged concentrations of carbon dioxide in the atmosphere reached levels not seen in roughly three million years.

"Carbon dioxide cools the stratosphere and when the stratosphere cools, it actually shrinks the size of the atmosphere," Gavin Schmidt, director of NASA's Goddard Institute for Space Studies, told National Observer. "So if you’re about 80 kilometres up, you actually are seeing the sky falling. It’s going down by a number of kilometres.”

His explanation coincides with a new announcement from the WMO, which said the world has been launched into a "new climate era" by the CO2 emissions in the atmosphere. While CO2 concentration spiked temporarily above the significant milestone of 400 parts per million (ppm) in 2015, it surged to new heights in 2016 on the heels of the extreme El Niño weather event — a naturally-occurring weather phenomenon linked to warm Pacific Ocean currents.

A greenhouse gas monitoring station in Hawaii predicted that those record CO2 concentrations will not dip below 400 pmm for many generations to come, and last spring, federal scientists also linked ​El Niño to the Fort McMurray wildfire that forced the largest evacuation in Alberta's history, shutting down several oilsands producers during the emergency.

“We’re not going to fix it," said Schmidt, "but we’re going to hopefully slow it down so that the changes that are going to occur happen slowly enough for us to adapt without too much suffering."

Schmidt says there still is some hope on the horizon. New technologies are emerging every year that can make countries and cities cleaner and greener and, if we share them, Schmidt said the world may be able to reduce the impact of climate change on those affected most by the crisis.

A journey of a thousand miles

"What’s going to happen is people are going to find that it’s actually easier to cut emissions than they think and there’s going to be best practices shared across different jurisdictions," he explained. “A journey of a thousand miles starts with a single step."

He applauded the global warming targets agreed upon last year at Paris as a good first step. But as time goes on, he said the world will need to adopt bolder solutions. Countries cannot afford to be complacent, he explained, and the "good decisions" must start today.

“People are going to make decisions and changes and investments, and in 2050 I think we’ll be doing much, much better than people think we’re doing now," he said in a phone interview from New York. "I think we still need to be pushing people and governments to think deeply about these issues because we’re making decisions now that have consequences for 20, 30, and 40 years.”

Keep it in the ground, protestors tell Trudeau​

Meanwhile, in Ottawa, 99 students and youth from across the country were detained and given citations by police following an act of civil disobedience. The protesters called on Prime Minister Justin Trudeau to demonstrate leadership in the world's new climate era by rejecting Kinder Morgan's Trans Mountain expansion — a pipeline proposal that if built, would ship up to 890,000 barrels of crude oil and petroleum per day from the Alberta oilsands to B.C. and Washington.

The peaceful protest represents the largest youth-led act of climate civil disobedience in Canadian history, according to its organizers. Demonstrators marched from the University of Ottawa to Parliament Hill with a clear message for the federal government: "Climate leaders don't build pipelines."

“The Kinder Morgan pipeline would directly threaten my nation and my home,” said Cedar Parker-George, a member of the Tsleil-Waututh First Nation in B.C. “Justin Trudeau promised to listen to Indigenous communities, well my community has been pretty clear: reject this pipeline and protect the water, the land and the climate."

While environmentalists argue that a halt in the expansion of oilsands operations is an easy way to reduce Canada's carbon footprint, industry and other stakeholders believe oil and other resources can be extracted sustainably and bolster economic development.

The federal government is set to make a decision on the Kinder Morgan pipeline by Dec. 19 in Ottawa.

Editor's note: This story was updated at 10:15 a.m. on Tuesday to add that some protesters in Ottawa were detained by police and given citations.

We need a 'typo report" link

We need a 'typo report" link as there are a few in the middle of this article, mostly missing articles or double articles. I only notice because my computer reads to me, otherwise my brain would miss it too!

By definition, it is impossible to have "sustainable" extraction of a non-renewable resource, period.

A resource is neither

A resource is neither renewable nor non-renewable if it not to be used.

Kids: Recalling the 60's+ as a time of change when the 'dark' hairs (activists, students and the impacted) lead by taking it to the streets. Seeing the students on Parliament Hill shows that they are paying attention and change is possible. Good on the students. Nat-Obs - keep up the great journalism. ... jes sayin'

Honeymoon's over. Let's see how we can steer the Trudeau government in a way that doesn't risk bringing in another Rogue Harper Regime. The Liberals' have strong ties to our financial sector, which is itself strung out on hydrocarbons. It will be a long slog but there is no viable alternative.

While all of the statements

While all of the statements made by Gavin Schmidt were factually true, that does not mean they were correct. Let's go through a few of them:
1. "Carbon dioxide cools the stratosphere and when the stratosphere cools, it actually shrinks the size of the atmosphere"
That is true, but is it bad? Why was it made to sound so scary. It is not. If you fell for that one, then let's go over the next.
2."While CO2 concentration spiked temporarily above the significant milestone of 400 parts per million (ppm) in 2015, it surged to new heights in 2016 on the heels of the extreme El Niño weather event — a naturally-occurring weather phenomenon linked to warm Pacific Ocean currents."
Yes, when the temperature increases, then the oceans outgas CO2, that's the way it works. So what? It's nothing caused by humans, it's caused by a natural event.
And yes, as the Fort Murray article stated, the fire was caused by an El Nino event , not human activity and not caused by increases in CO2.
3. ""but we’re going to hopefully slow it down so that the changes that are going to occur happen slowly enough for us to adapt without too much suffering"
Slowing down CO2 increases caused by natural events will not stop climate change. Dr. Gavin is being very disingenuous.
The rest of this article is still more scary stories, best reserved for dark and stormy nights.
Remember you are hearing this from people whose livelihood depends on promoting more of the propaganda. We do need to live in a cleaner, greener world. Did you know that the increase in CO2, since 1950, has caused a 14 percent increase in global plant growth? Think of the millions whose lives have been saved by this. At the same time there has been a decrease in global severe weather, no measurable temperature chnage as well as no change in sea level. And you want to stop this?

And I am reading this long

And I am reading this long poo-poo, depending on what? To be specific, we know the Nasa Scientist's expertise, what's yours? And isn't it about time we stopped that disingenuous argument, to wit, that scientists are making up global warming because they're paid to do so?

While denialists, just send us these reassuring counter opinions, out of the civic goodness of their hearts! Which is one more reason why Nexxon.....and recently other big oil players as well, are being sued for fraud.

I doubt they just disseminated that lying bunch of fallacies gratis. Suspect in fact, that we could have solarized much of my country, with the money they spent on junk science. But not to worry. In Alberta, lots of university educated oil and gas workers still believe the junk.

In Bitumen We Trust....quite a few of them wrote on the signs they carried at a recent rally in Calgary. Shows ta go ya, that even God can be replaced, if Big Oil finds it financially expedient.

The apologists for the

The apologists for the industry lie like sidewalks and, yes, we could be much further along the way to transition if we didn't let the industry have its way with mother Earth. See, for example, the article below.
It concentrates on American activities but we have plenty of fracking in Canada.
And the lecturer makes the point that cheap fracked gas is slowing the transition to renewable energy. Of course, it's only cheap if we ignore a few externalities like contamination of air and water that sickens people and livestock.
https://www.desmogblog.com/2018/04/11/climate-change-two-degree-warming-...

I wish you'd make it more

I wish you'd make it more visually prominent up front that this article is from October 2016. So that when scientists are quoted as saying we're not going to fix it but hopefully slow it down the reader might pause to wonder, well, how is that turning out. Or, you might even add a footnote to that effect, bring the article up to date.

A good point. Though it was

A good point. Though it was heartening to hear that Quebec students rallied in solidarity. Something I must have missed in Mainstream reporting from 2016. I'd like more information as well, on the support for the People opposing the pipeline in B.C., coming from the rest of Canada.

MSM seems to be universally on side with the Notley-Trudeau alliance, and that alliance's hope that a pipeline will resign tax haters to the carbon levy. I'm inclined to think otherwise, but having a better picture of who knows what climate science is suggesting we do with pipelines, would help everyone trying to come to grips with this nascent civil war in our country.

I'd like to see all media outlets, but MSM in particular, link the rapidity with which we now know climate is moving.....to this determination to lock in another 40 years of Bitumen export. I can't help but think that is the climate science is accurate, that pipeline, built or not, could soon be another stranded asset.

A review of the stats of what running that pipeline for 40 years would mean in CO2 production would be useful.