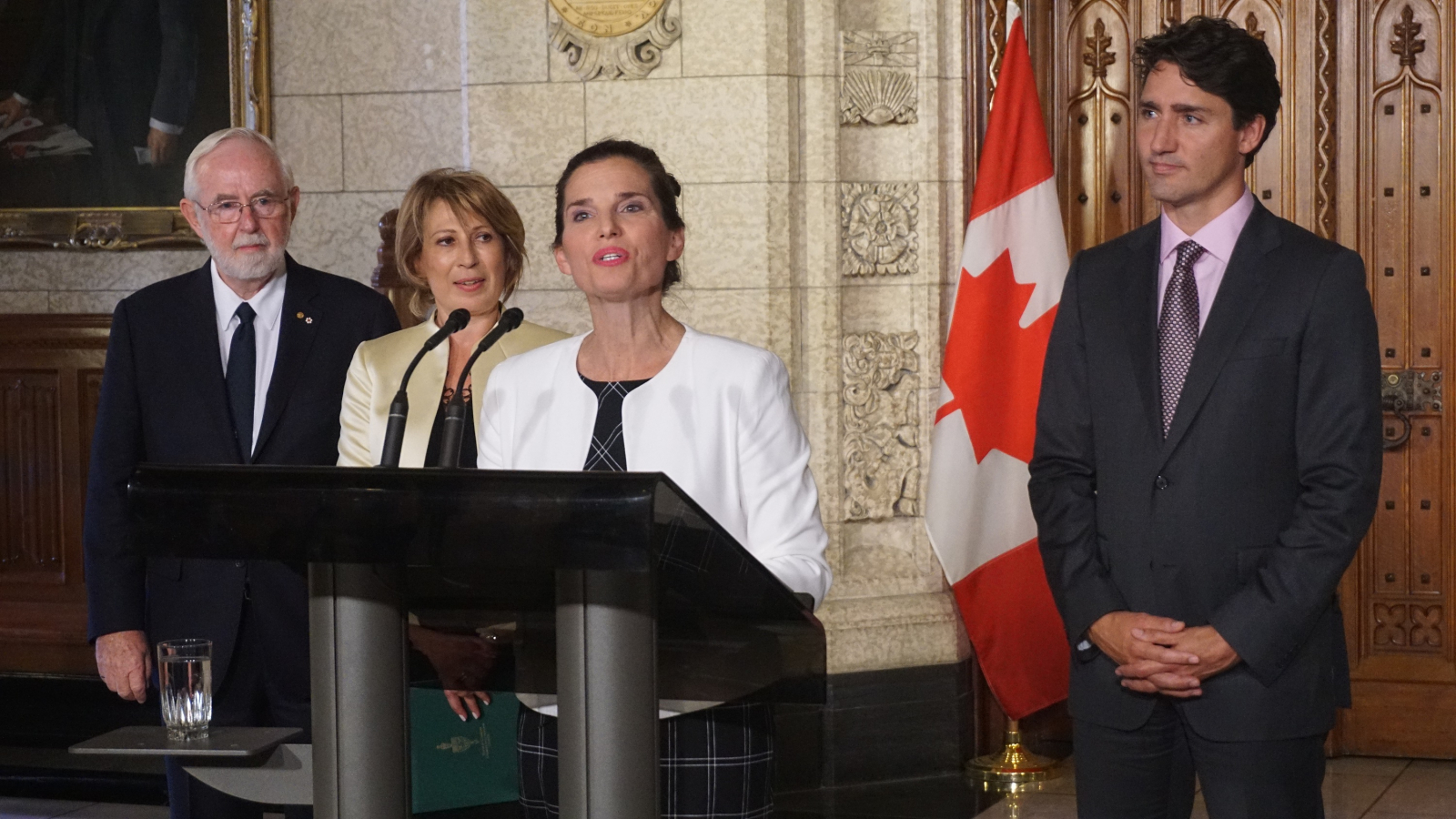 Science Minister Kirsty Duncan speaks at the announcement of Mona Nemer as chief science advisor. Nemer and Prime Minister Justin Trudeau look on at a press conference on Parliament Hill on Sept. 26, 2017. Photo by Carl Meyer
Previous story
Next story

A last-ditch effort to save critical research at a world-renowned climate science lab in the Canadian Arctic appears to be getting the attention of the Trudeau government.

Scientists have been warning for months that the ongoing research was in jeopardy because their funding was running out.

But in an interview with National Observer, Science Minister Kirsty Duncan said that the federal government was working with the researchers to find "other avenues of support."

“There is no change until [March] 2018. I think we’re in a fortunate position that we have time,” Duncan said Friday, Oct. 6.

‘Let me be clear. The facility remains open’

PEARL is arguably the most important of its kind in the world: a strategically-located high Arctic research station with an array of instruments to study ozone depletion, pollution and climate change, among other pursuits.

It already faced a funding crisis under the Harper government five years ago, but was saved by a new fund, what some saw as an emergency stopgap. Now, that latest measure is set to expire under the watch of Duncan — who herself fought the Tories while in opposition in defence of the lab.

Scientists have said the lab’s main funding will expire at the end of the year, with the possibility of some money being set aside to close up shop in the spring of 2018. Evidence for Democracy, an Ottawa-based group that pushes for evidence-based decision-making, launched a campaign last month to save the lab.

If funding is allowed to run out, advocates say government-funded academic research into climate science at the lab will be wrapped up. Other government departments, such as Environment and Climate Change Canada and the Canadian Space Agency, have done their own research at the lab in the past, but the facility's use remains unclear in the years ahead.

Duncan repeatedly emphasized that there was funding until next March.

“It is not easy to build a facility in the high Arctic; that is staying open. And officials are currently working with our researchers to find other avenues of support. But I stress — stress — that there is funding until [March] 2018,” said Duncan.

“Let me be clear. The facility remains open... there is no change in the operation of that facility, and officials are working with researchers to find other avenues of support.”

Duncan spoke with National Observer by phone in an interview that her office scheduled to last for 10 minutes. Her press secretary intervened during the call to ensure it didn't exceed the allotted time. The minister responded to questions related to three topics during the interview.

Two weeks ago, Duncan and Prime Minister Justin Trudeau announced that Mona Nemer, who has been a medical researcher and vice president research at University of Ottawa, will be Ottawa's chief science adviser.

The science minister said Nemer will help her carry out the Trudeau government's election promise to follow evidence-based decision-making.

"Her job will be to collate the most up-to-date, current science, the evidence, and to present it to myself, the prime minister, members of Cabinet," said Duncan.

"I have two goals in this country — to strengthen science, and to strengthen evidence-based decision-making — and having the chief science adviser in place is really good news."

Yet the scientific community was disappointed this spring when the federal budget didn’t contain a cash injection for a program that funds PEARL and six other projects, called the Climate Change and Atmospheric Research (CCAR) program.

Katie Gibbs, executive director of Evidence for Democracy, has said even if new funding was available now, there would still be gaps in data.

In an interview, she emphasized that Arctic research requires much planning. Scientists have said such research funding should be seen as a years-long issue, not measured in weeks or months.

“It is still an urgent issue,” said Gibbs. “These scientists still don’t know whether or not they should be planning more experiments at PEARL, or whether or not they can keep staff on. A decision has to be made immediately, in order to avoid data gaps.”

Scientists with knowledge of the lab have told National Observer in earlier interviews that personnel at PEARL had already begun looking for work elsewhere, and the facility will need more time to get any new program up and running.

Government officials have previously pointed to the new Canadian Centre for Climate Services, and the new Canadian High Arctic Research Station, when asked about mitigating the effect of PEARL's loss of funding. The Natural Sciences and Engineering Research Council (NSERC) has also provided a list of alternative programs that it said scientists can apply for.

But Environment and Climate Change Canada confirmed that the new services program was not intended to replace the fund fueling PEARL, and scientists say the new research station won’t be sufficient to replace PEARL.

Duncan did not raise any of the climate services centre, the research station or the alternative NSERC programs in her responses.

The project would expand and triple the capacity of an existing pipeline, but has come under renewed focus after TransCanada killed plans this month to build its proposed Energy East pipeline.

Trans Mountain was one of two pipeline projects conditionally approved by Trudeau in November 2016, but is now tied up in a legal process.

Last year, a group of scientists published a paper questioning the extent of evidence in the scientific literature about how oilsands crude oil affects marine organisms, a concern of those worried about the potential for oil spills off the West Coast as a result of increased tanker traffic accessing Trans Mountain. Three scientists said they shared their findings with Trudeau’s office.

Duncan was absent at the Nov. 29, 2016 announcement by Trudeau where the prime minister said the approval of Trans Mountain was a "decision based on rigorous debate, on science and on evidence."

Asked on Oct. 6, 2017 if she thought that if she had had a chief science adviser in place when the decision on Trans Mountain was made, the scientific paper would have been flagged, Duncan dismissed the question.

"Your question is speculative, and I don’t answer speculative questions," she said.

Duncan instead said she wanted to discuss "how pleased I am to have a chief science adviser," saying it was a key commitment of her government, and describing the process for how she consulted on the position's mandate.

"I will talk about what the chief science adviser will do, now that one is in place," she said when pressed again on whether Nemer would have flagged the study.

Asked whether the science surrounding Trans Mountain was something she intended to bring up with Nemer, the minister said, "it's been one week."

"Dr. Nemer and I have talked. We talk about this being a proactive position, one where she will bring issues to us. And there’s also a reactive piece, that the prime minister, myself, members of cabinet, can go to her and ask if she might be willing to look at an issue for us," said Duncan.

Wendy Palen, an associate professor of the ecology of aquatic communities at Simon Fraser University in B.C., and one of the authors of the paper, said she wasn't surprised at the minister's reaction.

"It is a what-if situation, that I don't think any elected official would probably entertain," she said.

But she added she hoped Nemer, whose appointment she saw as "a really important step towards restoring public trust in how cabinet-level decisions are made," would be vocal and involved on topics like Trans Mountain.

"My hope is that [Nemer's] office is exactly for that purpose, to be able to...offer a high-level synthesis of what is understood about the science behind these issues," said Palen.

Editor's note: This story was updated at 7:43 p.m. ET after Minister Duncan's office contacted National Observer to correct the minister's quotes about the timing of the funding. The correction is reflected in square brackets.

The millions of Canadian

The millions of Canadian taxpayers' dollars NRCan promised to fund PRIVATE industry's (TransCanada's) GHG emissions research for their proposed and now defunct Energy East project, should be re-allocated to this world class Arctic lab.
Annualized funding must be budgeted for. This government needs to put its money where it's mouth is.

I want this lab funded, not

I want this lab funded, not only on its own merits, but simply because of the "on thin ice" headline. Seriously funny.