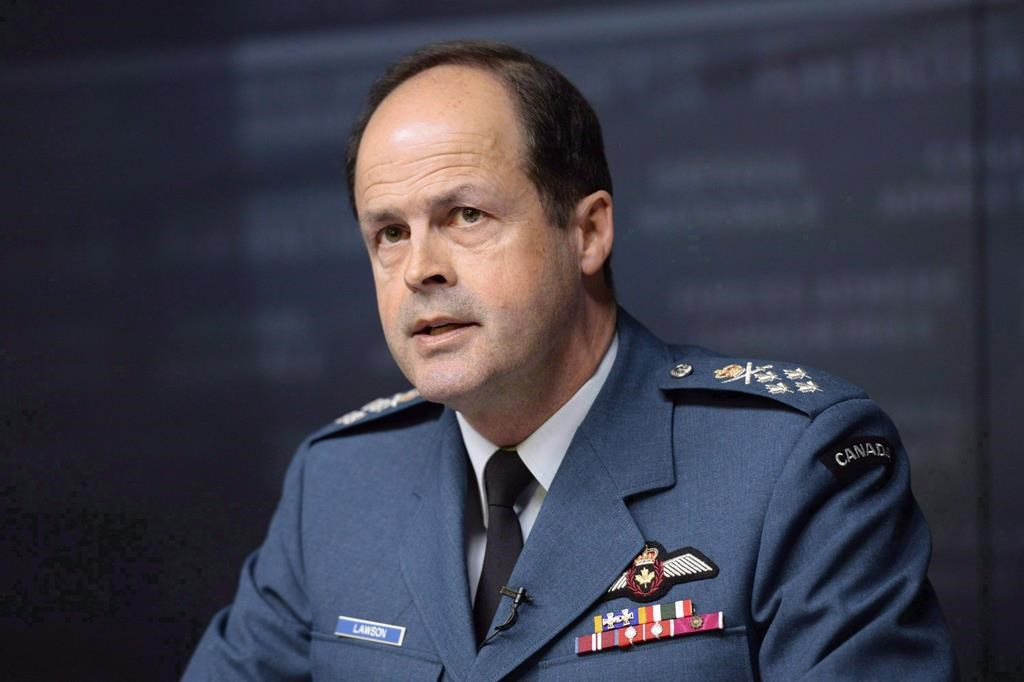 General Tom Lawson, Chief of the Defence Staff, speaks at a news conference in Ottawa on April 30, 2015. File photo by The Canadian Press/Adrian Wyld
Previous story
Next story

A team of military investigators arrived in British Columbia on Monday to begin searching for answers into Sunday's deadly Snowbird crash, which the aerobatic team's commander described as a confluence of "worst-case scenarios, and it became our absolute worst nightmare."

The eight-member flight investigation team was deployed from Ottawa to Kamloops, where one of the Snowbirds's famed Tutor jets went down shortly after takeoff. The Snowbirds had been in the midst of a cross-country tour aimed at boosting morale during the COVID-19 pandemic.

One Canadian Armed Forces member, Capt. Jennifer Casey, a public affairs officer from Halifax, was killed while another, Capt. Richard MacDougall, who was piloting the aircraft, sustained serious but non-life threatening injuries.

During a news conference at 15 Wing Moose Jaw in Saskatchewan, where the Snowbirds are based, team commander Lt.-Col. Mike French said the cross-country tour known as Operation Inspiration has been suspended while the team's Tutor jets are subject to an "operational pause."

French would not speculate on the cause of the crash, but insisted that safety is the Snowbirds' "No. 1 priority." He added that each aircraft is torn down and rebuilt about every two years and subject to regular maintenance and checks prior to every flight.

"Our priorities are always the safety of the public, the safety of our personnel and then the protection of our equipment and property," he said, adding what happened Sunday was "the confluence of all those worst-case scenarios and it became our absolute worst nightmare."

The crash was actually the second for the Snowbirds since October and the second involving a Royal Canadian Air Force aircraft in as many months after a Cyclone helicopter went down in the Ionian Sea on April 29, killing all six people on board.

The Cyclone's voice and flight-data recorders have been recovered, but the fuselage is under about 3,000 metres of water. Defence officials will update Canadians on efforts to recover the helicopter wreckage during a technical briefing in Ottawa on Tuesday.

Unlike the Cyclone crash, which was only witnessed by crew from the Halifax-class frigate HMCS Fredericton, Canadians across the country have been able to watch Sunday's Snowbird crash thanks to videos shot by various bystanders at the Kamloops Airport.

Even as investigators were hitting the ground in Kamloops Monday, retired Air Force officers said it appears based on the videos that the Tutor jet's engine lost power shortly after taking off. They point to the plane climbing into the air before plummeting to the ground as evidence.

The aircraft crashed into a residential neighbourhood in Kamloops. Nobody on the ground was injured.

"Certainly it's an engine loss," said retired chief of the defence staff Tom Lawson, who spent most of his military career flying fighter jets.

Retired air force commander Andre Deschamps echoed that assessment, saying videos of the incident suggest the Tutor experienced an engine compressor stall. Such stalls are the result of airflow into an plane's engine being disrupted, causing dramatic power loss.

The question now appears to be what caused the compressor stall, including whether it was a mechanical failure or a bird being sucked into the Tutor's engine. Bird strikes, as they are called, have caused compressor stalls on many other aircraft that have crashed.

Bird strikes are an unfortunate occurrence, but where there is perhaps more concern than normal is that engine-power loss has also been blamed for the crash of a Snowbird in the U.S. state of Georgia last October. The exact cause remains under investigation.

While Lawson was hopeful the two Snowbird crashes represented simply a rash of bad luck for the team, Deschamps said investigators will need to ensure there is not a systemic problem within the Tutor fleet that could cause other crashes.

There have been plans to replace the 57-year-old Tutors for years. Obtained as a training aircraft in 1963, they were supposed to be retired in 2010. A total of seven pilots and two passengers have been killed and several aircraft have been lost over the course of the Snowbirds’ history.

Lawson says the plan was to replace them as part of a larger overhaul of the air force's training fleet. The Defence Department in 2015 pegged the cost of replacing the Tutors at between $500 million and $1.5 billion.

Stephen Harper's Conservative government instead extended their lives to 2020 as it mulled which new fighter aircraft to buy to replace the CF-18s. The Trudeau Liberals planned to do the same to 2030, setting aside up to $100 million to upgrade their avionics and other systems.

Yet while Lawson, Deschamps and retired air force commander Mike Hood expressed frustration over the failure of successive governments to obtain a new jet trainer, they were united in praising the Tutor despite its age and uncertainty around the cause of the two recent crashes.

That is because the Air Force has piles of spare parts for the Tutors and the aircraft are well built for their job and well maintained by military technicians.

"Is it an old aircraft? Of course it is," said Hood.

"Can it still do the same Snowbirds' display it did in 1970 when the Snowbirds started? Yes it can. Can it do safely? Yes. Do we lose that type of aircraft to accidents and incidents along the way? You can see the record of them. And what we do inherently has an element of danger to it."

This report by The Canadian Press was first published May 18, 2020.

Wondering whether top-notch aircraft maintenance is readily available these days for a cross-country flying exhibition.

By Emilee Gilpin | News | May 15th 2020
Opinion Coronavirus in Canada