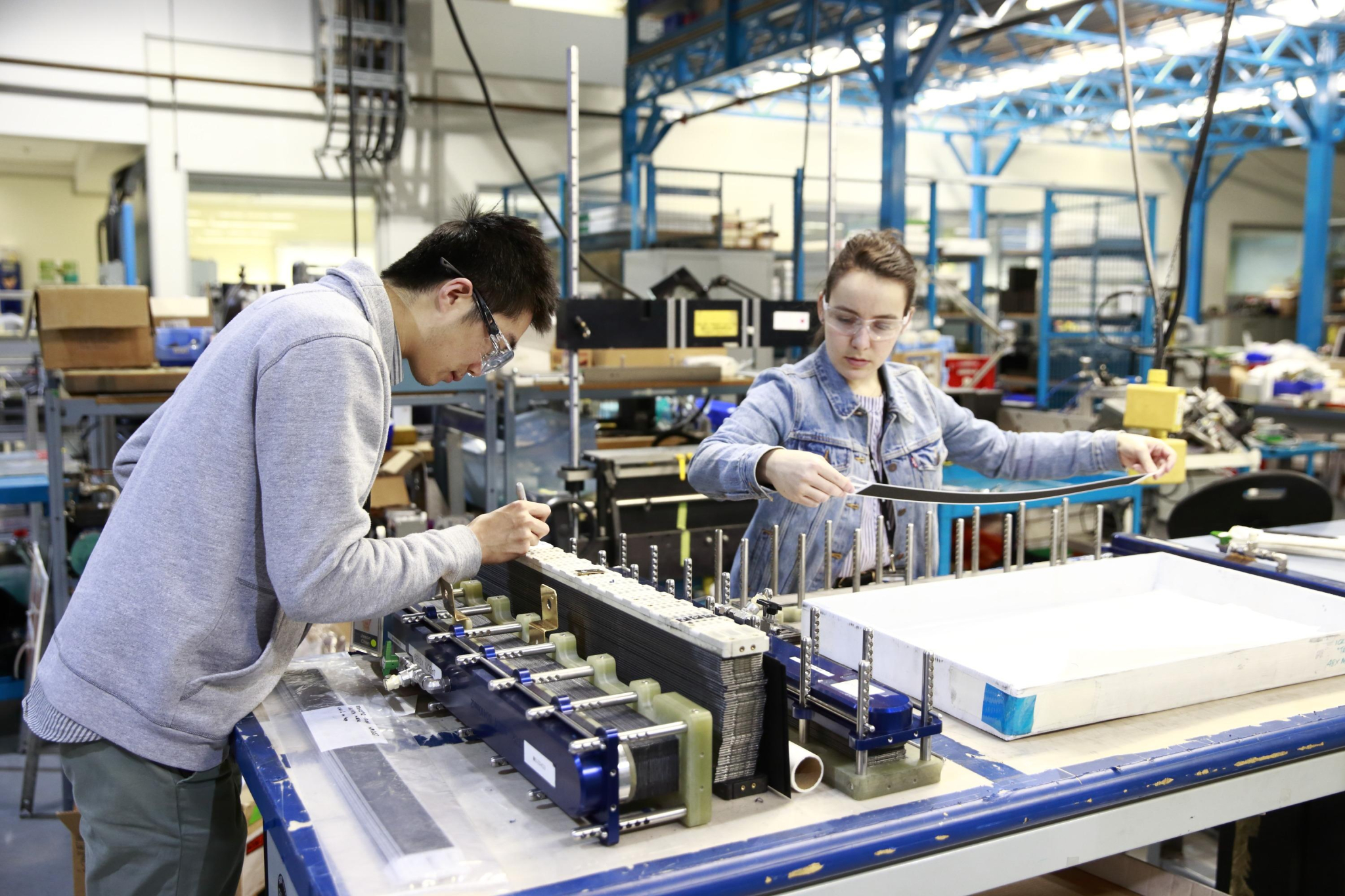 Technicians at Ballard's hydrogen fuel cell facility in Burnaby, B.C., concentrate on the task at hand. Hydrogen is considered to be an essential weapon in the battle against climate change. Photo from Ballard Power Systems blog
Previous story
Next story

The industry group representing Ontario energy producers is urging governments to accelerate the adoption of clean technology now if they want to reach net-zero emissions without disrupting consumers’ lives.

The Ontario Energy Association (OEA) outlines its suggestions for how the province could reach the federally set goal of net-zero emissions by 2050 in a policy paper released Wednesday morning. Though the group says the expansion of renewable sources like wind and solar could play a significant role, it also argues governments should focus on lowering emissions from natural gas instead of phasing it out entirely.

“We've got 28 years to get this done,” OEA president and CEO Vince Brescia in a phone interview.

“To do that (governments are) going to have to help accelerate innovation and help scale some industries so that we can get costs into that zone where it's not disruptive. Time will tell whether we're able to do that in such a short period.”

The report, titled “Net Zero 2050” and provided to Canada’s National Observer in advance under embargo, isn’t meant to be a roadmap to achieving Ontario’s climate goals. It also doesn’t include modelling to show how its suggestions might impact the province’s greenhouse gas emissions.

Instead, the OEA ⁠— whose members are utilities like Toronto Hydro and fossil fuel companies like Enbridge ⁠— outlines how it sees the industry playing a role in a transition that will require a significant cultural shift.

The association’s topline finding is that Ontario’s first priority should be decarbonizing transportation, which is the province’s largest source of carbon emissions. Electric vehicles are one option.

The report also points to “renewable natural gas” made from organic waste from places like landfills or farms, and hydrogen fuel cells as possibilities for fuelling long-haul trucks. (Both options have been criticized by environmentalists, who point out that hydrogen can be made from fossil fuels and say renewable natural gas isn’t as low-carbon as it seems.)

“We have all the technologies we need right now to begin a very fast transition in that sector and maintain affordability of the transportation system,” Brescia said.

The OEA report also examines emissions from heating buildings with natural gas, which it argues would be too difficult and expensive to phase out entirely as that energy would need to be replaced with a massive amount of electricity capacity. The paper recommends adding more hydrogen and renewable natural gas to the mix instead, noting that energy-efficiency programs, carbon offsets and carbon capture would likely also be part of the equation.

In a new policy paper, the association representing Ontario's energy sector has outlined how it sees the industry fitting in as the province transitions to net-zero emissions. #onpoli

As it stands, Ontario’s electricity sector is relatively clean: the province’s power mostly comes from nuclear plants and hydro, which are zero-emissions sources. But the grid does contain natural gas, and the Ford government is planning to increase that over the next decade to make up a gap left behind by nuclear stations going offline for refurbishment, which is set to triple emissions from the sector and erase gains made by phasing out coal.

The report also recommends all levels of government work together and remain open to emerging technologies.

Sarah Buchanan, the clean economy program manager at green non-profit Environmental Defence, said it’s good that the report acknowledges the need for renewables. But the ideas the OEA highlights would benefit the fossil fuel industry at a time when it needs to be phased out, she said.

“A report that tries to position natural gas as a way to get to net-zero takes some real logistical gymnastics to understand,” Buchanan said.

Brescia said a drastic change like that would be too risky and voters could turn on such a plan if they started to foot increased costs.

“We need to keep consumers and the voters on board with a stable and affordable transition,” he said.

It’s not yet clear how the Ford government might alter its climate plan in response to Ottawa’s net-zero pledge. Last year, Ontario’s auditor general warned that the province is at risk of missing its 2030 emissions-reduction target.

Brescia is scheduled to present the paper in a webinar Wednesday.

??? If consumers *started* to face increased costs?
Hello? Wanna take a look at my electricity bills? Or for that matter, my gas bills? And compare the increase in the bills to the decreaases in usage? Perhaps?
I'm also pretty fed up with all the posturing around, "Hey, we've got 28 years left to figure this out!" Will someone please explain to these idiots that it's not exclusively the date we reach zero that counts: it's the total area under the curve that counts. Had we got on board for real in the 90s, or in 2005, or in 2015, or '16, or '17 or '18 ... we *might* have "time" for figuring out the last few steps.
They can fool investors by kicking cans down the road, as long as they pump out the dividends and increasing share evaluations. But Mother Nature doesn't give a dawdly poop about investors, or CEOs or GDP. She calls'em as they come.
It blows me away that anyone can sincerely claim there's "time" when the far north is already dealing with temperature increases well over 2 degrees, when Cali and Au are burning from spring through fall, when oceans and their species are dying off at alarming rates, when you can't drink water from creeks and streams because they're toxic (thanks to oil and gas, their extraction, and their products -- that industry shills somehow think are a boon to civilization. How is postponing doing anything going to stop ANY of that?
Huh? Huh? Huh? Mr. Brescia Mouthpiece? Did you just show yourself to be either an ignoramus, or a cynical greed-monger?
Frankly, Occam needs to be lateralized, to cut through all the trough-feeders' noise.
There are no Get Out Of Jail Free cards left.

To hell with the OEA and the

To hell with the OEA and the SUV they rode in on. They're just lying and greenwashing and I don't really see why we need to be taking anything the oil or natural gas industry say seriously at this point. They're not people who should be involved in the conversation, any more than we should be consulting Storm Front on what to do about hate speech.