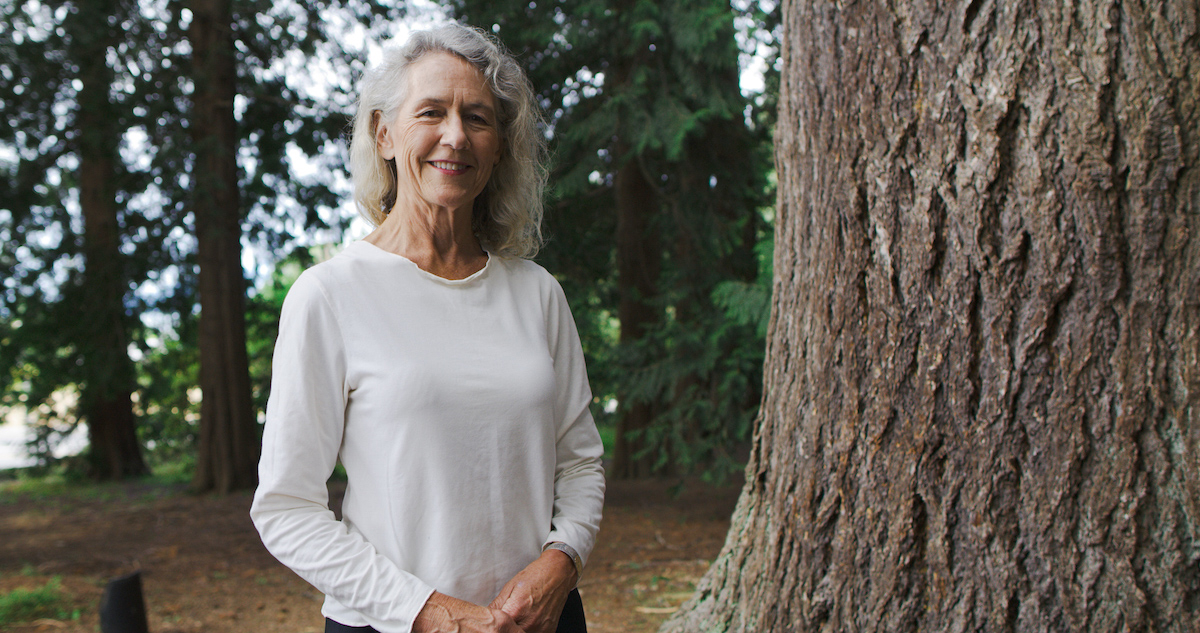 Federal Fisheries Minister Joyce Murray is cutting the commercial herring fishing allocation to 10 per cent, down from 20 per cent last year, to protect the valuable forage fish and threatened salmon. Photo courtesy of Fisheries Ministry
Previous story
Next story

Wading into the thick of fish politics Thursday, Murray said the decision is based on an abundance of caution given herring are a critical food for endangered salmon stocks — further jeopardized by the double whammy of fire and floods in B.C. this year.

The sole remaining commercial herring fishery in the Strait of Georgia will be reduced to a 10 per cent harvest rate — down from 20 per cent last year — with a maximum total allowable catch of 7,850 tonnes.

“This is an extraordinary time, when our Pacific Coast is reeling from natural disasters, and the serious damage they have caused to the environment and our iconic Pacific salmon,” Murray said in a press release.

Herring, vital to the West Coast ecosystem, are in a fragile state, Murray added.

“We must do what we can to protect and regenerate this important forage species.”

Herring catch quota is an ongoing bone of contention

The B.C. herring roe fishery, which typically occurs in the spring, is a long-standing flashpoint of controversy.

The sole remaining commercial herring fishery in the Strait of Georgia will be reduced to a 10 per cent harvest rate — down from 20 per cent last year — with a maximum total allowable catch of 7,850 tonnes. #BC

Conservation groups and some First Nations have argued the 20 per cent catch allocation over the past decade will trigger the collapse of the herring stock with dire outcomes for the whales, seabirds, and salmon. Some critics want a moratorium on the fishery — at the very least until there is an accurate stock analysis.

But catch reductions are wildly unpopular with commercial fishers, under increasing pressure on all sides and still reeling after most of the salmon fishery was shuttered permanently by the ministry this summer.

The minister’s announcement came as a complete surprise, said Jay Ritchlin, director-general of the David Suzuki Foundation for Western Canada.

The foundation has been pushing Fisheries and Oceans Canada (DFO) to lower the herring catch allotment to 10 per cent for the past three years, previously without effect, Ritchlin said.

“It’s really amazing from our point of view and a pleasant surprise,” Ritchlin said, adding the foundation doesn’t support a complete moratorium on the fishery.

The minister’s decision seems to mark a turn from management decisions that typically focus on a maximum sustainable yield, he said.

“Which to me is basically like seeing how much you can take before you crash the whole system,” Ritchlin said.

“We have just always thought this could be an ecosystem-based fishery where humans interact with the environment in a respectful way.”

“People rely on this fishery,” Lawson said, adding harvesters paying thousands of dollars for licences can’t make a return when half their herring quota disappears.

The fishing community is already struggling to stay afloat, he said, citing former minister Bernadette Jordan's closure of 60 per cent of the province's commercial salmon fisheries — a measure to try to prevent the collapse of B.C.’s keystone species, which has been on the decline for years due to climate change, habitat loss and overfishing.

“I think this is going to bankrupt people,” he said, noting herring is one of the only spring fisheries remaining for harvesters.

The fishery is sustainable, he said, disagreeing that herring stocks are at imminent risk.

“The decision is political, not based in science,” he said. “There’s no one more invested in conservation than us, but this is not that case.”

The ministry is going to have to provide harvesters with compensation if there’s any hope they’ll survive, he said.

“I think there’s no way around this. We’re going to need a structural adjustment program.”

Minister aims to strike a balance

The minister’s announcement made no mention of compensation.

“Reduced allocations in the herring fishery are part of an annual process,” the minister’s office wrote in an email to Canada’s National Observer.

“With each fishery, DFO determines what commercial activity the stocks can support, and there is not compensation in the event that a fishery cannot open in a particular year.”

The decision supports fishing where possible, but is also consistent with the goals to recover and regenerate the important herring stocks, Murray said.

“With every fisheries management decision I make as minister, I have to consider the long-term health of the entire ecosystem, as well as the interests of fishers and their communities,” she said.

“As a coastal Canadian, I know that at the centre of every decision there are real people and real communities that will be directly impacted.

“Using the best available science, taking into account any uncertainties or exceptional circumstances, I aim to make decisions that will create economic opportunities and promote stock growth for long-term abundance.”

DFO will release details of the herring fishery management plan with stock projections and management measures in the near future, the ministry said.

Now THIS is an important and

Now THIS is an important and brave step in the right direction. Good on Joyce Murray. I am bothered by the commentary that states firstly that jobs will be lost, that fisherman will go broke ....and secondly, make claims that they (the fisheries) are concerned that the herring must be saved. If we do not take drastic steps to save and enhance the herring populations the entire food chain in our coastal waters will collapse and disappear..... so saving some fishing jobs, while destroying the remaining fish population is simply foolish and narrow-minded.

Yep. Ain't none of those

Yep. Ain't none of those jobs gonna be standing if they crash the fishery like the cod. Going "La la la I'm not listening the stocks are fiiiine" will help nobody.

Fisherman, like far too many other humans will indeed go bankrupt for the simple reason that they refuse to face reality and because they are already "bankrupt" mentally by their failure to adapt.

Adaptation is what made humans dominant world beaters. It seems we have reached our adapability limits.

This is likely a necessary

This is likely a necessary step toward a place where we all acknowledge how much of our economy is based on over production, over consumption and over utilization of natural resources that do not exist primarily for human benefit. The ecosystem is many braided....complex beyond our present understanding, and we are 'resourcing' it, extracting from it, damaging the waters and the hydrological cycles on which it depends, faster than scientists can chart all of its interconnections.

Currently, I don't think most of us know how close we may be to a variety of ecological collapses....but recent floods have certainly told us how efficient clear cut logging has been to landslides. The damage we've done to the world's oceans may seem trivial, given how large the oceans are, but I fear we may be whistling in the dark.

The collapse of a feedstock that a keystone species like the salmon depend on is no trivial matter.....it would have disastrous consequences cascading through our coastal forests. Let's err on the side of caution, support this move, and find ways to help the fishing industry while the stocks rebound.

After the cod fishery, I'm

After the cod fishery, I'm forever on the side of conservation and unwilling to believe a word that commercial fishery representatives say.

Unfortunately, the Minister needs to take similar action on the East Coast where political cowardice has ruled the day for far too long. Behind the inaction is a woeful lack of population statistics on key species and a Fisheries Act that still places far too much discretion in the hands of the minister. Canada needs to join the most progressive nations with mandatory stock rebuilding built into our legislation. A sustainable in-shore fishery is still within our reach, but not for much longer.

A very necessary and bold

A very necessary and bold move meant to conserve the marine resource. Many kudos to Joyce Murray, and the minister before her. The fish boat owners and workers who are vociferous in their complaints would be undermined anyway by the collapse of herring stocks.

It PO's me to read the critic's statements, acting like they are the only ones who have ever experienced being laid off, or that that they never saw the decades-long decline in fisheries coming.

A very necessary and bold

A very necessary and bold move meant to conserve the marine resource. Many kudos to Joyce Murray, and the minister before her. The fish boat owners and workers who are vociferous in their complaints would be undermined anyway by the collapse of herring stocks.

It PO's me to read the critic's statements, acting like they are the only ones who have ever experienced being laid off, or that that they never saw the decades-long decline in fisheries coming.

Kudos to Murray. Perhaps their permit fees could be reduced proportional to profits lost by the reduction.
Perhaps a schedule could be provided to the industry setting out the quota reductions they can expect year over year, so they can modify their operations or sell out.
Like the oil patch workers, they seem to believe they are entitled to continue on exactly the same as ever, with perhaps an increase in profits each year.
Many, many workers and fields of work have been shut down over the years, whether due to technological advances or to globalization.
I might add that neither Alberta nor BC had any sympathy for the Ontario workforce when it lost a half million jobs in one year due to the first Free Trade Agreement with the US. Many of them had the pleasure of destroying their work-in-progress (Avro Arrow, the most advanced aircraft of its time), or training US workers to do their jobs before packing up the plant, lock stock and barrel, for it to be shipped south before they got their pink slips. There was no compensation to anyone, other than a short term of unemployment insurance.
Ontario survived. So will the people in the fishing industry and their offspring.