Don’t Look Up is the first climate film to fulfill the promise of the movies: making us laugh, making us cry. It manages to be both cathartic and crazy-making at the same time and reactions to it have been fascinating.

Adam McKay’s climate allegory hit immediate blockbuster status. It broke Netflix records, not just in the U.S., but topped the charts in 88 of the 89 countries where it was released. That’s notable in itself since an obvious critique of the film is its overwhelming America-centredness.

Climate scientists — who have widely panned all previous efforts — love it, many commenting they finally feel seen. Professional critics hate it, often surprisingly viciously, and in stark contrast to regular viewers: Rotten Tomatoes scores hover around 50 per cent from the critics but 80 per cent from audiences.

The film is lacerating in its satire of the news-entertainment-social media complex (which I can’t help thinking explains much of the harshness in critics’ reactions). In fact, the movie itself is artfully cut to provoke the same destabilizing, disjointed experience as the modern media environment.

It’s an environment we are all too familiar with. Information-packed and meaningless. Simultaneously frenetic and anesthetizing. Casino science applied to mass communication. One of the movie’s great moments comes on the set of a morning-style TV show when an exasperated Leonardo DiCaprio finally blurts out: “Why does everything have to be so clever or likable? Sometimes we just need to be able to say things to each other.”

Although the movie is obviously about climate breakdown (McKay describes it as a “Clark Kent-level disguise”), it succeeds by not touching the topic at all. The movie centres on the long-standing trope of a comet hurtling towards Earth — the same scenario that James Hansen used in his TED Talk many years ago.

The allegory cuts through many of the challenges we have in conceptualizing climate change. The production company behind Don’t Look Up is called Hyperobject Industries, a nod to Timothy Morton’s term for things like climate change we can sort of understand but are too vast and complex to really get our minds around.

By compressing the time frame and providing a clear villain, Don’t Look Up ironically removes the hyperobject, which allows for more of a Dr. Strangelove-style movie and more fully human responses to our climate predicament.

It acknowledges the feeling so many of us have that we’re going crazy. We know what’s happening, we know what’s bearing down, but no one’s acting like it. Most of the time, not even our own selves.

Removing the hyperobject creates limitations, of course. The movie is reaching hundreds of millions of people, penetrating way beyond the climate choir, but none of them will be any wiser about the fossil fuels driving the crisis or the steps needed to stop it spiralling beyond control.

But there is some very subversive narrative to the film. It’s not that we’re unable to come together, process our plight and respond meaningfully. We do, in fact, make a plan and launch an operation. But we give up our best chance — in the movie, we literally abort the mission — seduced by the siren song of economic opportunity.

Don’t act too urgently, the winning argument goes, there’s plenty of time to profit from the crisis and invent a better solution later.

Except there wasn’t. Don’t Look Up punctures one of the most dangerous cultural presumptions we hold about stopping climate change: that surely someone somewhere is on the job and it’ll all get sorted out.

The movie provides no such solace and bravely rejects the Hollywood ending. The final scenes are the most moving, depressing and oddly cathartic part of the film. Look up, look down, it refuses to look away.

The year that was

It’s that sobering time of the year when the climate quants release their summaries of the year gone by. Last year set all kinds of records but it wasn’t the planet’s hottest. It came fifth. The current tally is that the hottest seven years on record were the last seven.

We reached new heights for greenhouse gases. Methane soared to 1,900 parts per billion and nitrous oxide to 334. CO2 continues its relentless climb — we’ll find out what record we’ve set later this spring when CO2 levels reach their annual peak just as the great northern forests emerge from hibernation. 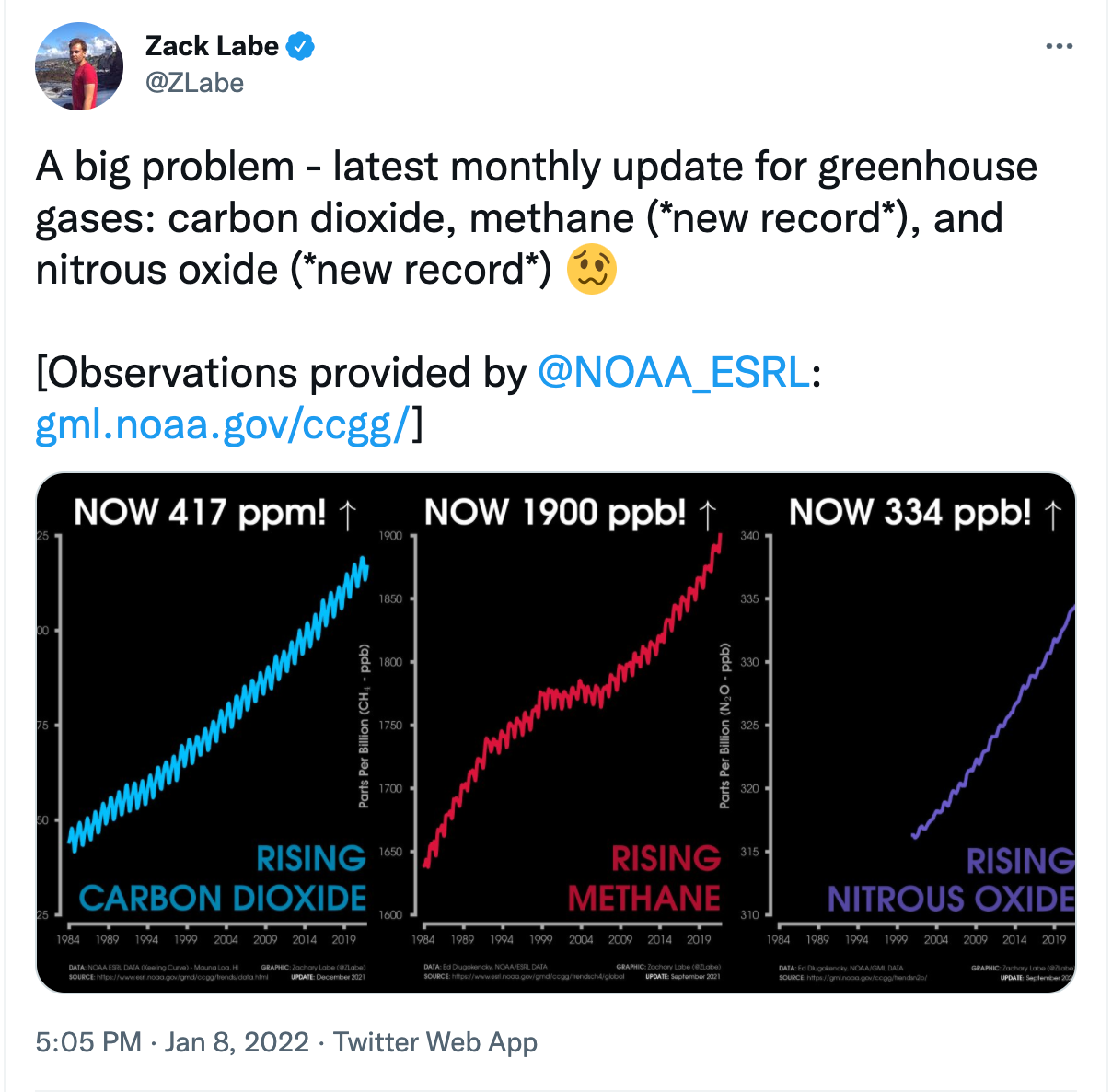 In 2021, the world also set a record for the number of SUVs on the road — up more than 35 million over the past 12 months, increasing CO2 emissions by 120 million tonnes.

Australia hit the record for hottest day in the Southern Hemisphere: 50.7 C.

Much of South America is suffering intense drought and wildfires. 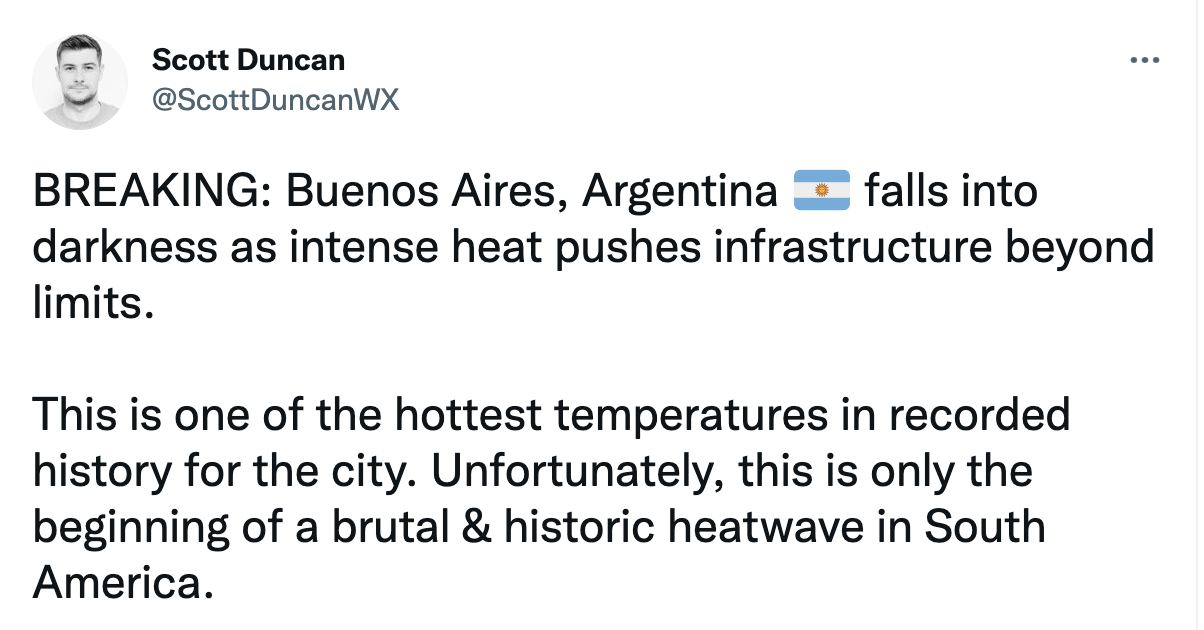 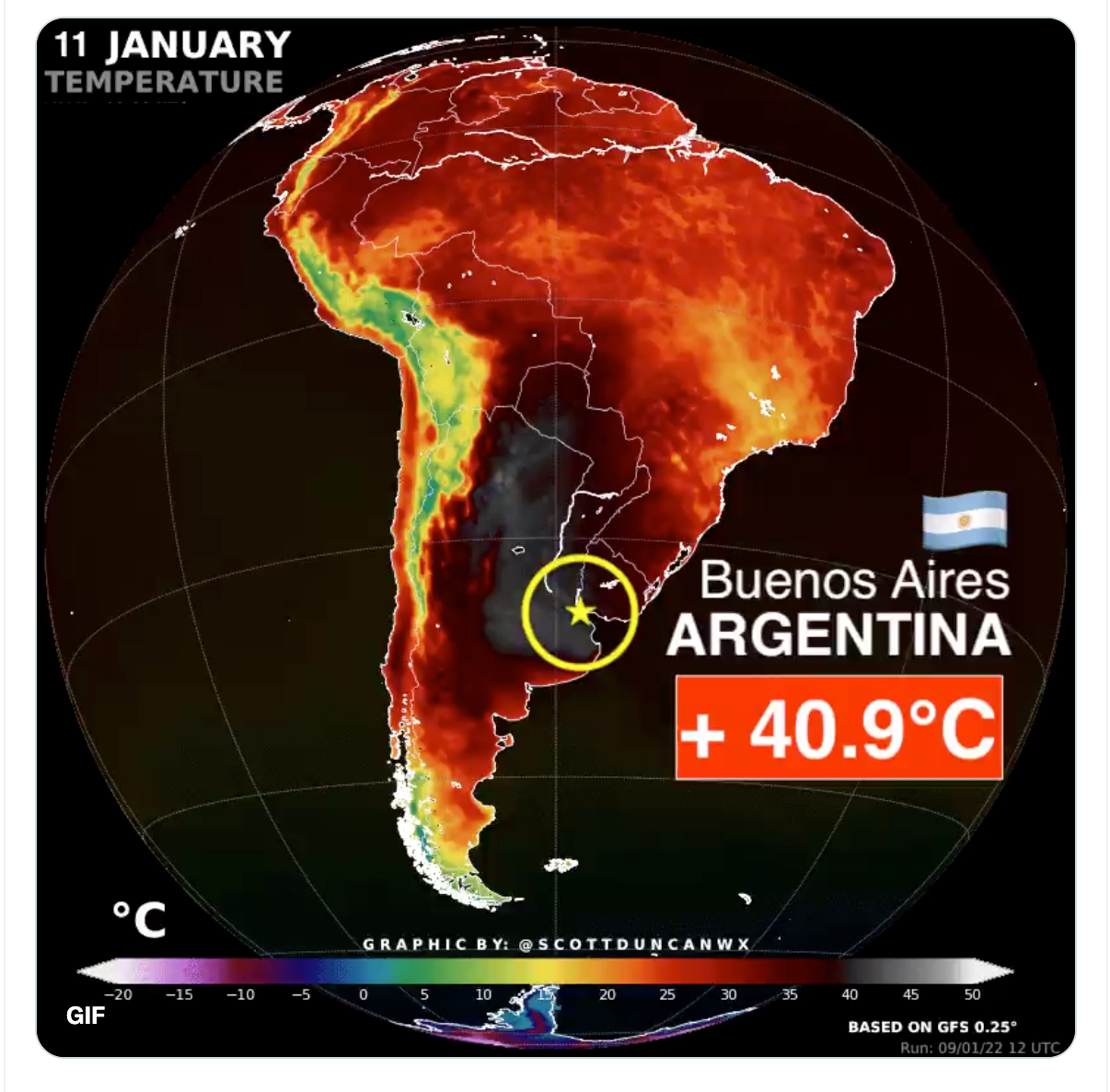 After surveying 1,000 experts and global leaders, the World Economic Forum concluded the climate crisis is the biggest threat facing the world.

The International Energy Agency released its first report in five years about Canadian climate policy this week. It was broadly supportive of federal efforts but had warnings for the oil and gas sector and said Canada will need a lot more clean electricity to decarbonize the country.

Climate activists were underwhelmed: “In a world that is already battered by the effects of a changing climate, it is unconscionable to keep growing fossil fuel production. Canada must cap our oil and gas production and develop a plan to wind down extraction as global demand declines,” said Canadian oil and gas programs director for Stand.earth Sven Biggs

Meanwhile, another hefty report examined how much needs to be done on adaptation and emergency response. Canada is weak on data about hazard zones, coordination between agencies and levels of government and Canadians are wildly underinsured against overland flooding.

“What used to be one-in-100 year events, sort of viewed as being anomalies or things that will never happen, are now becoming more of a pattern,” said Scott Vaughan, chair of the expert panel on Disaster Resilience in a Changing Climate, which produced the report.

RCMP lost a lawsuit about spying on Indigenous and climate activists.

Cloe Logan reports: “The news comes almost a decade after the original complaint was sparked by an investigation by the Vancouver Observer, predecessor to Canada’s National Observer, which revealed police infiltrated groups and spied on citizens opposing Enbridge’s now-defunct Northern Gateway pipeline proposal.

The federal Conservative leader went on a bizarre Twitter rant about Steven Guilbeault. He openly lied about Guilbeault’s intention to shut down the Canadian oil and gas sector in the next 18 months and dug up an old photo of Guilbeault in what could appear to be prison coveralls, taken after climbing the CN Tower to protest climate obstructionism in the Kyoto years.

Althia Raj writes: “Call me naïve, but after nearly 20 years of covering politics some things still surprise me — namely the comfort and ease with which some politicians will distort the truth.”

Supriya Dwivedi writes: “If you care about affordability, you should care about climate change. While Conservative politicians across Canada have done a very good job of maligning climate change mitigation as fundamentally unaffordable, the reality is, if we don’t act now on climate change, we’ll be dealt a much higher bill down the road.”

Your pot isn’t as green as you think

John Woodside reported on the energy it takes to grow weed on an industrial scale with a particular look at Canadian cannabis companies. One company, Canopy Growth, spewed the equivalent of 65 million pounds of coal in 2020.

John also reported on the watering down of Canada’s clean fuel standard under pressure from industry lobbying.

“This could be an important tool in reducing our emissions, but the Liberals have watered it down to the point where the new clean fuel standard will not only fail to meaningfully contribute to emissions reductions, but it actually will delay the transition away from fossil fuels that's already happening,” says the NDP’s Laurel Collins.

“The three interns that Canada’s Black Environmental Initiative sent to the COP26 climate conference in Glasgow in November may have been the only Black youth the country had inside the venue,” reports Morgan Sharp.

Enbridge is floating a new argument to jack up consumer prices: the climate crisis means pipelines may have a shorter life than expected so they need more money now. The argument flies in the face of claims the company had been making about its Line 3 and Line 5 pipelines

“The episode is a spectacle of what’s been called disaster capitalism: In this case, a fossil fuel behemoth is citing the ecological crisis it is intensifying as a justification to extract more profits from consumers already being crushed by higher prices,” writes Julia Rock in Jacobin.

New York Gov. Kathy Hochul announced her support for a statewide ban on gas in new buildings. It would be the first statewide ban in the U.S.

E&E News reports: “Gas bans first took hold at the city level in 2019 in California, and they’ve since been counteracted by a wave of preemption laws that prevent cities from restricting fossil fuel use in buildings. Twenty states have passed those preemption laws, while no state has set targets for shifting new buildings away from oil and gas.”

New York City passed a municipal version of the ban on new hookups in mid-December.


Greta gets a frog

A new species of frog was discovered in Panama and it has been named Pristimantis gretathunbergae. It’s a rain frog that lives in isolated sky islands in the eastern part of the country.

I’ll leave you this week with an oldie. If you aren’t familiar with the term “hyperobject” that inspired the production company behind Don’t Look Up or with Timothy Morton who coined the term, you might appreciate this long read from The Guardian: ‘A reckoning for our species’: the philosopher prophet of the Anthropocene.

Thank you for reading Zero Carbon. Please pass it along to anyone you think might be interested. You can email me with your thoughts or suggestions for future newsletters at [email protected].

Sources and links
Don’t Look Up

Jenny Uechi reviewed the film for Canada’s National Observer and cites a useful roundup of climate movie-making by Solitaire Townsend.

The movie made George Monbiot see his whole life of campaigning flash before him.

Copernicus, Globally, the seven hottest years on record were the last seven; carbon dioxide and methane concentrations continue to rise.

Canada’s National Observer: Climate remains the world's biggest threat but there are newcomers on the list.

Toronto Star: With this one astonishing claim, Erin O’Toole let us all down.

Canada’s National Observer: Your pot isn’t as green as you think.

Greta gets a frog