5 things you may have missed from the G7 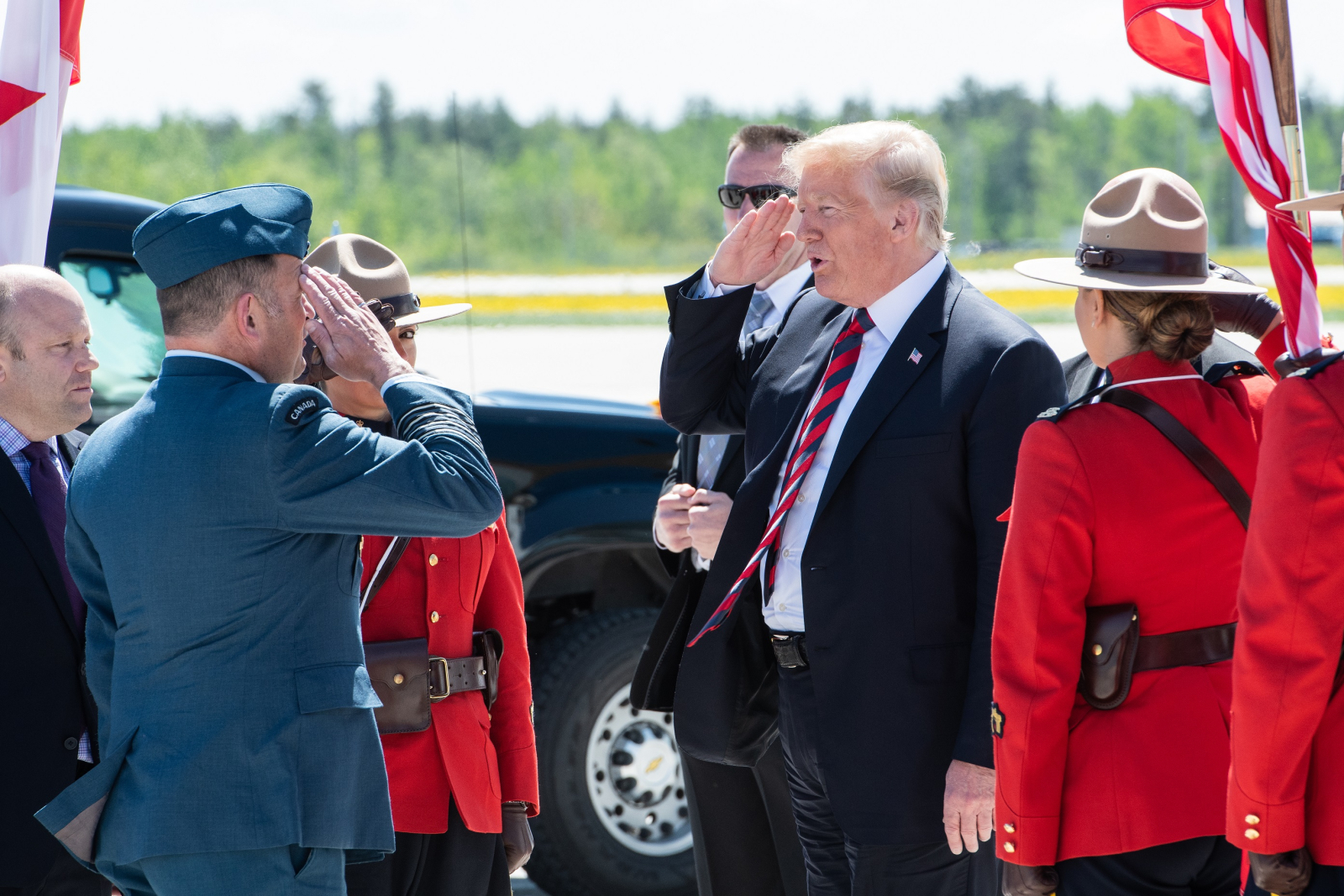 The relentless hurricane of news about U.S. President Donald Trump dominated the G7 summit in Quebec last weekend — which is perhaps why Canada’s foreign affairs minister, Chrystia Freeland, made an interesting remark during her mid-summit update.

The joint statement signed by all leaders would not be the only document coming out of the summit, the minister noted. “We also have the documents from Charlevoix dealing with supporting democracy," she added, and others.

Well, minister, we listened. Here are five facts drawn from summit documents that you might have missed:

Trump fled the G7 summit before it had finished, jetting off to Singapore to grip-and-grin with North Korean leader Kim Jong-un.

But the deal that emerged from that meeting has been criticized as having weaker language than in past North Korean negotiations.

It turns out, it also has weaker language than the G7 statement that the Americans endorsed right before Trump fled the scene.

The Bush administration called for a “complete, verifiable, and irreversible dismantlement” of North Korea’s nuclear program.

Those three words happen to appear in the 2018 G7 statement: “we continue to call on North Korea to completely, verifiably and irreversibly dismantle all of its weapons of mass destruction and ballistic missiles as well as its related programs and facilities.”

But Trump’s deal with Kim says the country “commits to work toward complete denuclearization” — no mention of the “verifiable” and “irreversible” part.

Ironically, one of the aspects of the Iran nuclear deal that Trump cited as justification for abandoning it was the issue of verification. He said the deal’s inspection provisions “lack adequate mechanisms to prevent, detect and punish cheating.”

Nevertheless, on Wednesday, U.S. Secretary of State Mike Pompeo pushed back against criticism that the Trump-Kim deal didn’t mention verification and irreversibility.

"Let me assure you that 'complete' encompasses 'verifiable' in the minds of everyone concerned,” he said. “One can't completely denuclearize without validating, authenticating — you pick the word. The president is committed to that."

Perhaps the G7 didn't need to use those words after all, then.

Trump's media bashing, Russia lobbying, flies in the face of his G7 commitments

At the summit, Trump trashed the media and lobbied for Russia to rejoin the club, despite that nation’s 2014 seizure of Crimea that got it booted from the G7 in the first place.

The joint statements he signed in Quebec, however, condemn Russia, call out foreign meddling in elections and promote freedom of the press.

A document called the Charlevoix Commitment on Defending Democracy from Foreign Threats — the one referred to by Freeland — promotes “free, independent and pluralistic media” and “fact-based information.”

Yet Trump has repeatedly denigrated his own country's intelligence, choosing to believe Putin’s words instead, and he has called a criminal investigation into Trump-Russia ties a “witch hunt" despite multiple guilty pleas.

At the G7, however, whether he knows it or not, he supported “civic awareness aimed at promoting critical thinking skills and media literacy on intentionally misleading information.”

He also supported taking “concerted action in responding to foreign actors who seek to undermine our democratic societies and institutions, our electoral processes, our sovereignty and our security.”

The G7 leaders — supposedly with Trump on board — urged Russia to "cease its destabilizing behaviour to undermine democratic systems and its support of the Syrian regime.”

The group specifically condemned the attempted poisoning of Yulia Skripal in Salisbury, U.K. that British authorities have concluded was highly likely to be the handiwork of Russian intelligence agents.

Finally, in a move that isolates Trump on his Russia lobbying, the leaders reiterated their “condemnation of the illegal annexation of Crimea” and support for Ukrainian sovereignty.

A 'G6' talks up Paris and carbon pricing

It was always going to be a Hail Mary pass to get the climate science-denying, environmental safeguard-scuttling Trump administration to agree to language supporting the Paris climate accord.

However, Environment and Climate Change Minister Catherine McKenna suggested, even during the summit, that the White House might still be on board with a charter on plastics pollution in the oceans. In the end the U.S. excluded itself from that too, as did Japan.

But having removed the Americans from the equation, the other six countries — Canada, France, Germany, Italy, Japan, the United Kingdom — and the European Union actually made a decent list of environmental commitments for themselves.

The six nations and the EU reaffirmed their “strong commitment” to implement the Paris agreement, and to “ensuring a just transition” for workers, their families and communities in fossil fuel sectors that will have to be wound down to get to a low-carbon economy.

They also discussed “the importance of carbon pricing,” clean energy and new technologies to protect the environment. The group also reaffirmed its commitment to cut pollution enough to reach “a global carbon-neutral economy over the course of the second half of the century.”

Putting a price on pollution is something that federal Conservative Party members and Ontario premier-designate Doug Ford strongly oppose, a position McKenna rejected at the summit.

Finally, the group of six said they would promote the fight against climate change “through collaborative partnerships and work with all relevant partners,” not only government and the private sector, but “local, Indigenous, remote coastal and small island communities.”

Even so, the G7’s commitment in 2016 to phase out “inefficient fossil fuel subsidies” by 2025 was nowhere to be seen in last year’s joint statement, and has similarly gone into witness protection this year.

Energy production and use accounts for two-thirds of global carbon pollution, so global average temperature rise will only be halted if the world stops burning fossil fuels. That, in turn, will happen only when states stop helping fossil fuel companies prosper with public money.

The G7 statement in 2017, after Trump took office, made no mention of the fossil fuel subsidy phaseout it had called for the year prior. It did say leaders would “push for the removal of all trade-distorting practices” including “subsidies” and other government supports.

This year the language was further watered down: instead of "pushing" for the removal of subsidies, leaders will “strive to reduce” them.

Canada has found it difficult to do so. A 2017 federal auditor general report found that Canada's fossil fuel subsidies hadn't been properly defined or studied by the government, and had only been partially addressed in federal legislation.

The Trump administration has been abandoning multilateral deals all over the place; examples include the Trans-Pacific Partnership trade deal, the Paris climate accord and the Iran nuclear deal.

Meanwhile, the administration’s tariffs and threats of sanctions is threatening to undermine the World Trade Organization, which is supposed to provide a multinational forum to resolve disputes and avoid one-on-one trade spats.

So it’s no surprise that at a pre-summit meeting of G7 finance ministers and central bank governors on June 2, the attendees had a “frank exchange on the benefits of an open rules-based trading system” according to a government release.

The Americans continued to object to the benefits of the global trade system at the summit in Quebec, according to the Toronto Star.

“They couldn’t agree to language that supported the global rules-based trading system because they were trying to reform the system,” the newspaper reported.

And that’s the language that the 2018 communique does contain, in the end — that the countries in the G7 “underline the crucial role” of “a” — not “the” — “rules-based international trading system.”

Communities will need to come