Looking Canadian racism in the face 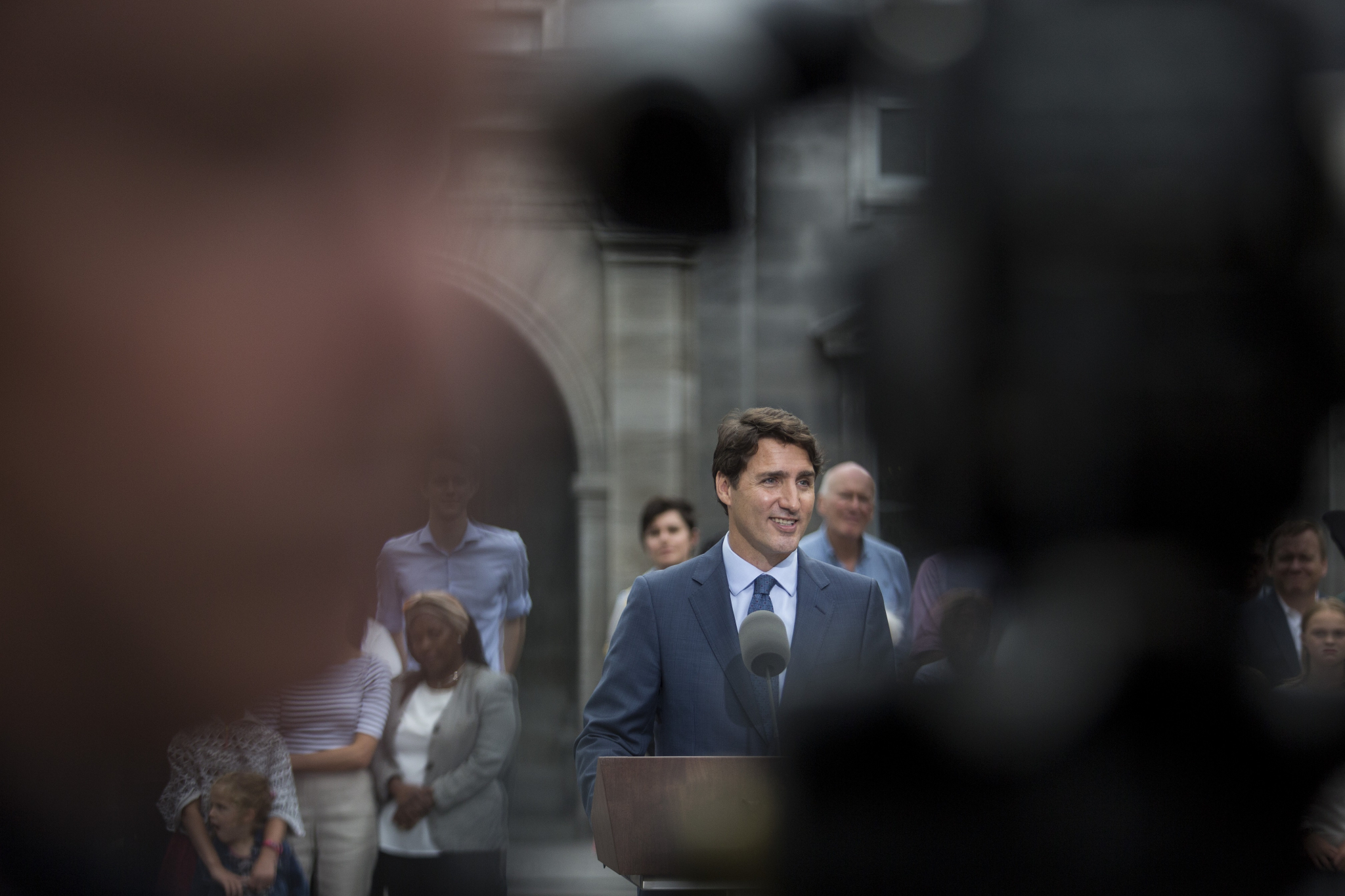 The real measure of racism in Canada is not how many times Justin Trudeau has appeared in blackface or brownface, but how long it has taken media and political institutions to even admit the existence of a problem.

There is no need to comb through Trudeau’s past to find evidence of racism; it’s all over his recent political record:

• shoving projects like the Trans Mountain pipeline through unceded Indigenous lands without consent;

• sending in armed forces against Indigenous land protectors in unceded territories like the Unist’ot’en camp;

• refusing to suspend the Safe Third Country Agreement with the United States, which turns away mostly black and brown asylum seekers on the myth the U.S. is “safe”;

• eviscerating refugees’ international legal right to seek asylum with amendments to the Immigration and Refugee Protection Act that will deny many claimants a fair hearing;

• increasing deportation targets by 25 to 35 per cent, coinciding with the arrival of Haitian, Nigerian and other black asylum seekers at the border;

• continuing the cruel practice of indefinite immigration detention (even the U.S. imposes a time limit);

• entering into information-sharing and border-search agreements with the U.S., enabling the harassment of black, brown and Muslim travellers.

And yet, the same media outlets now in a frenzy over face-gate long refused to acknowledge the truth staring them in the face: racism pervades Canadian politics.

When 44 per cent of Canadians admitted to Angus Reid they “could not” vote for a prime minister who wears a turban, this was spun into congratulatory headlines announcing a “majority of Canadians would consider voting for a Sikh prime minister” — celebrating the racist glass for being only half full.

And when polls showed only 6.1 per cent of Canadians considered Jagmeet Singh the “most ethical party leader” — far behind Andrew Scheer and Trudeau, even in the wake of revelations about Scheer’s racist Yellow Vest fraternization and Trudeau’s SNC-Lavalin corruption — no one bothered to ask why a brown man with a turban and no scandals was perceived as so much less “ethical” than two white men with major scandals.

Meanwhile, Conservative campaign manager Hamish Marshall — a former corporate director of extreme-right Rebel Media — is characterized affectionately in a recent Maclean’s profile as an “owlish data nerd,” and condemnations of him are dismissed as a “caricature” in the Toronto Star.

Judging from the coverage, wearing a turban presents a more serious problem for a career in Canadian politics than a history of connections to white supremacy.

Media election “explainers” on economic, environmental and immigration issues continue to omit any analysis of race, even though Indigenous, black and racialized communities bear the heaviest burdens of poverty, unemployment, migrant exclusion and exploitation and environmental devastation in Canada.

Following the blackface and brownface exposé, journalists have fixated on whether black and brown voters will “forgive” Trudeau for their “hurt feelings,” ignoring the hurt lives and bodies brutalized by police, battered by harsh immigration regimes and harassed by security agencies.

The idea that blackface and brownface are about “costumes” and “face paint” is like looking at notorious U.S. torture prison Abu Ghraib and only seeing the orange jumpsuits: the esthetics abstracted from the larger systems of violence, terror and domination in which they are embedded.

In fact, journalists and activists calling attention to these issues in Canada have routinely been dismissed, marginalized, ridiculed, threatened, maligned and surveilled. The critiques of violence are perversely deemed more offensive and incendiary than the violence itself.

The common argument that we should refrain from criticizing more “progressive” parties to avoid empowering the Conservatives only forces communities under the boot of racism to choose between a rock and a slightly smaller rock.

A 2017 Angus Reid survey found almost a quarter of Liberal and NDP voters would “not consider” voting for a Sikh party leader who wears a turban. And, indeed, the Green party recently accepted NDP defectors in New Brunswick, with the fact “some people thought that (Singh) was Muslim” lurking in the background of the exodus.

While politicians and pundits now attempt to instrumentalize Trudeau’s racist spectacle as fodder for a partisan circus, we have long known systemic racism underlies the whole political tent.

Amar Wala is a film director, writer and producer. Azeezah Kanji is a legal academic and journalist. Desmond Cole is a journalist, author and activist.

Hello:
The thrust of the article is right on! It has seemed to me that the furor over the "blackface and brownface " fiasco is justified in that it is based on racist attitudes .What makes me somewhat cynical , however, is the deep-seated conviction I have that this uproar is not because it is condemning racism but is merely a crass attempt to smear rather than to criticize in order to effect a change in societal attitudes. Just the usual dirty politics and , in the process, once again selling out and demeaning the plight of our brothers and sisters .
The election should be about the issues affecting our ("our" meaning all peoples residing in this country) land and futures. Politics was, perhaps. the province of people who wanted to serve, not control, improve, not corrupt and to lead the people, not use and degrade as cash cows to feed their greed and hunger for power. Who can we trust?Are their any selfless people with the ability and courage to truly lead us to a better place and thereby save the planet as well as society for our children's children?We prided ourselves as Canadians that we were better than the rest of the bigoted, narrow world in our treatment of others, Slowly we heard of Canadian mining companies, Canadian oil companies, Canadian manufacturers and a host of other enterprises of Canadian stamp who raped and pillaged the world and got away with it by buying tinpot politicians in those countries. We lost our innocence and our pride. Now our own "leaders" are treating us as those poor people abroad were treated . RESIST AND REBEL! Vote the bastards out! I don't know who to put in their place but DO NOT put a demagogue in their place! Better we have no leaders than more of what we've been getting.

From its earliest history of

From its earliest history of European colonization - with rare exceptions, the invaders have practiced classic discrimination against the indigenous populations of North, Central and South America. The Catholic Church sanctioned the European takeover, declaring the continent as essentially uninhabited, ignoring the indigenous as savage, scarcely human inhabitants - at least until they could be converted to Christianity and brought under the control of "civilization" .

What followed in rapid succession was the holocaust/genocide of the terra incognita inhabitants as European epidemic disease swept through the continent. Estimates of the population losses vary but altogether they came close to extermination.

In Canada, we are now well aware of the various measures settlers and governments have taken over the centuries to eliminate, assimilate, and ignore the remnants of Canada's First Nations. Until the early 1960's Canadian law did not recognize the Indigenous inhabitants as "persons". Exactly the status the "Famous Five" Canadian women sued the government to have reversed so that the females of Canada could enjoy full participation and legal status as human individuals. It is hard to imagine that such a short time ago Canadian women were not "persons" but something other. Canada's Indigenous had to wait until the 1960's to have this egregious legal fiction overturned - but even today, many European Canadians act as though First Nations people do not deserve the designation and are not "real" Canadians.

Laughably, there is no universal definition of what makes an individual a Canadian since even the ceremony of citizenship for our assorted immigrants, refugees, and people of colour from around the world is not proof against the insults of "go back to where you came from" , "Where are you REALLY from?'

The truth is that all of us "come from away", whites and nonwhites alike. Humanity is migratory. If we know nothing else about human history we should know at least that. And the other truth we need to acknowledge is that we are all mongrels. Genetics can prove that. There is no such thing as a "pur laine" genetic strain.

And finally, the anomaly of whiteness - which seems to those who possess it, the only true proof of acceptable, born to rule humanity - is composed of recessive genes that will eventually die out. It is this distinction that throws panic among the "white face race".

So, it could be interpreted that the tempest over whites imitating brown and black faces as an attempt to join the majority? or, an attempt to understand what it is to be non-white? Nah, don't buy that. The real and repulsive motivation for donning "coloured skin" is to reduce it to caricature, to erase the subconcious threat colour poses to white.

All of the America's contain multitudes. All of the inhabitants have come from away. The only distinction among us is how long ago we immigrated!