Draft fishery deal would be a game-changer for treaty rights: Mi'kmaq chief 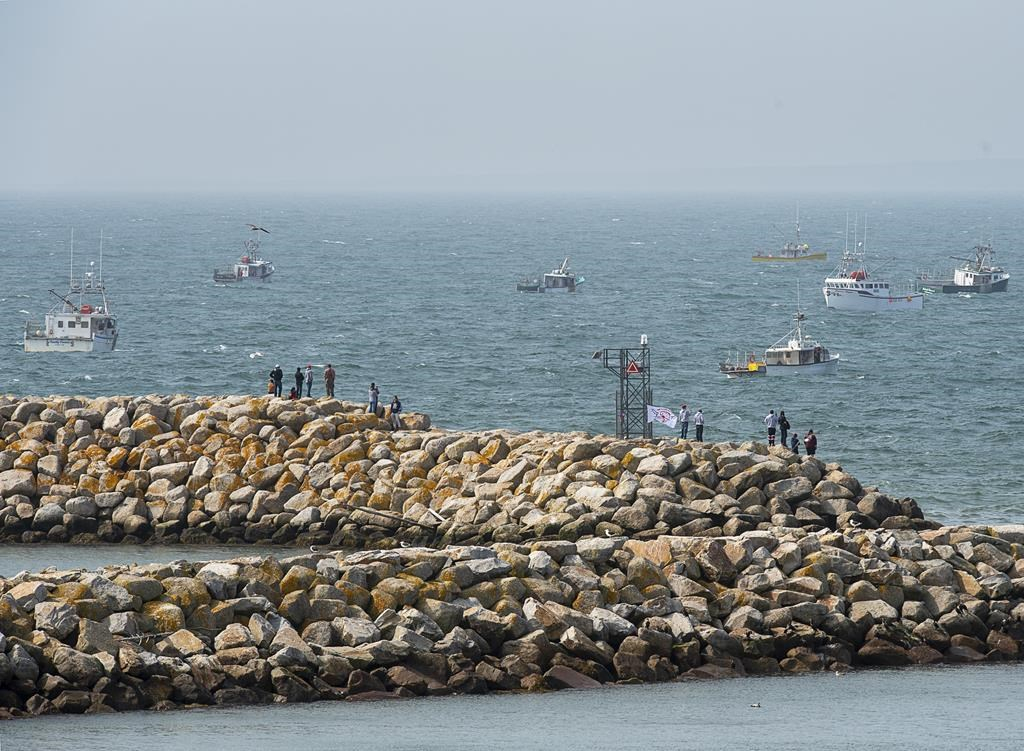 Members of the Sipekne'katik First Nation stand on the breakwater in Saulnierville, N.S., as non-indigenous boats protest the launch the Mi'kmaq self-regulated fishery on Sept. 17, 2020. File photo by The Canadian Press/Andrew Vaughan
Previous story
Next story

A draft agreement between Ottawa and a Nova Scotia First nation over a "moderate livelihood" fishery has the potential to be a historic recognition of Mi'kmaq treaty rights, the community's chief said Sunday.

Mike Sack of Sipekne'katik First Nation said he is reviewing a draft memorandum of understanding he received from the office of Fisheries and Oceans Minister Bernadette Jordan late Friday.

He said the Sipekne'katik Treaty Fishery agreement would allow the Mi'kmaq community to legally sell their catch.

"It's very significant," Sack said in an interview. "It can help lift our people out of poverty."

The community's lawyers are going over the agreement and clarifying a few points to ensure nothing infringes on the treaty rights of future generations, he added.

But the chief said he'd like to get a deal finalized as soon as possible, noting that "these last couple of months have seemed like a lifetime to us."

An escalating series of events ensued, leading to the destruction of a lobster pound that had housed the Indigenous fishers' catch.

Other flareups included the cutting of Mi'kmaq lobster traps, wharf-side gatherings of large crowds of protesters hurling racist insults at fishers and the alleged torching of multiple vehicles.

A draft agreement between Ottawa and a #NovaScotia First nation defines "moderate livelihood" fishery and would be a historic recognition of #Mikmaq treaty rights, the community's chief said on Nov. 29, 2020. #cdnpoli #lobsterdispute

Jane Deeks, press secretary for the Fisheries and Oceans Minister, said the federal government and the Sipekne’katik First Nation are continuing to work collaboratively towards an agreement.

"Our negotiations have been positive, constructive, and progress is being made," she said in an email on Sunday. "While there is still more work ahead of us, we are making progress together.”

She confirmed that a draft memorandum of understanding is currently with Sipekne’katik First Nation.

"We share the same goals of a productive and sustainable fishery, and to further implement Sipekne’katik First Nation’s Treaty Rights," Deeks added.

Meanwhile, Sack said the agreement follows through on the Supreme Court of Canada's recognition of Indigenous treaty rights in its landmark 1999 Marshall decision.

The ruling affirmed the Mi'kmaq treaty right to fish for a "moderate livelihood," though the top court later clarified that the federal government could regulate the fishery for conservation and other limited purposes.

“This agreement has the potential to be a historic recognition of our treaty rights and to make good on the promise and legacy of Donald Marshall Junior’s work," Sack said.

"The big part for us is making sure we can harvest and sell and it's reflected in there."