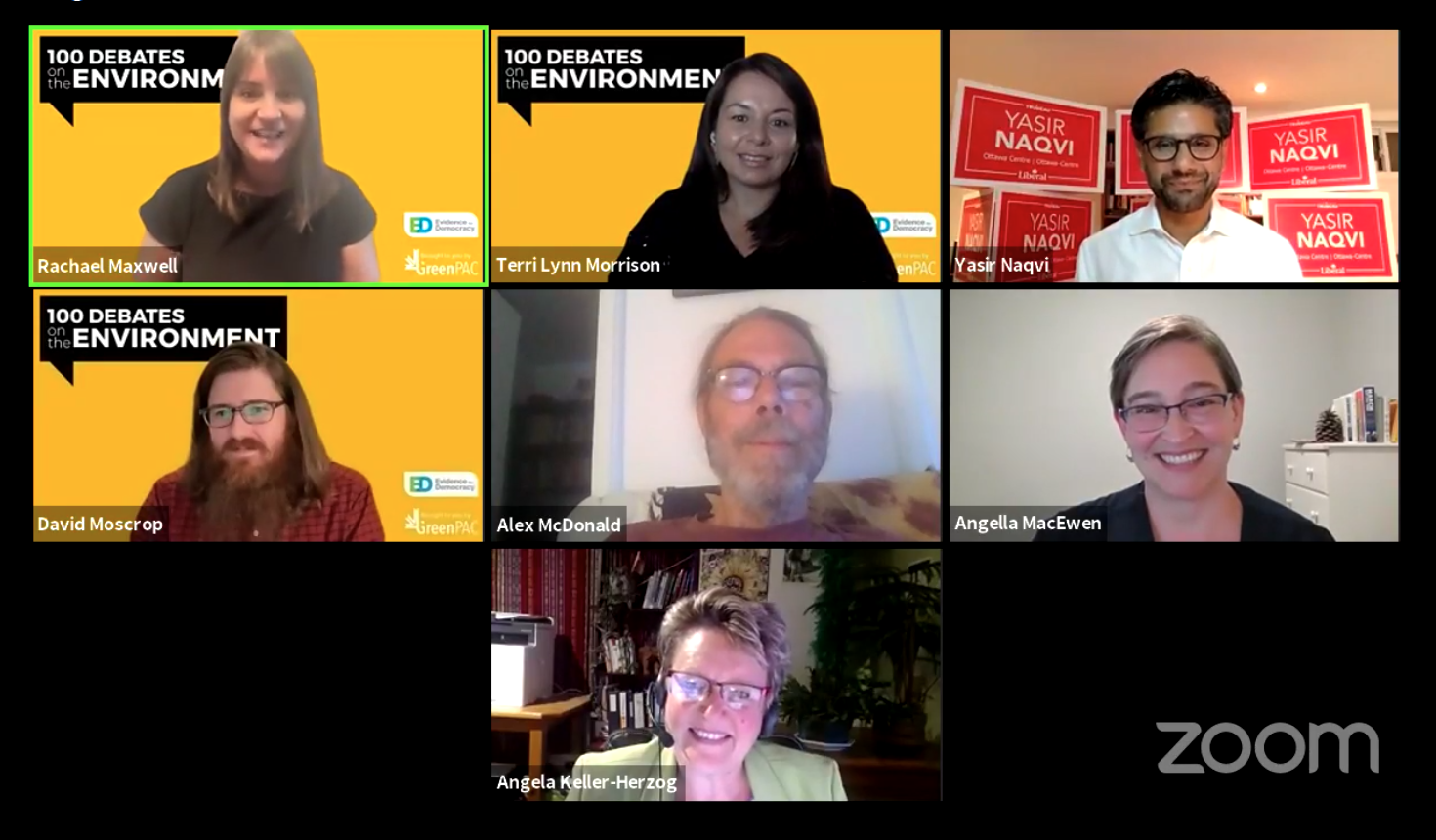 Unlike the federal leaders' debate, candidates participating in GreenPAC’s 100 Debates for the Environment this week were able to give thoughtful, clear answers and respectful rebuttals, the non-profit environmental organization’s executive director said.

“There was a lot of cordiality; it was a very well-structured way to actually hear what the candidates had to say,” said Sarah Van Exan. Many of the questions posed by moderators were very black and white and elicited clear responses, she added.

GreenPAC, which organized the first 100 Debates for the Environment in 2019 in partnership with Équiterre, aims to facilitate as many non-partisan all-candidate debates as possible to draw attention to environmental issues. This year's events began on Sept. 7 and will run until Sept. 16 in federal ridings across the country.

The debates provide voters with a chance to question local candidates on their plans for climate action, raise public awareness of climate issues, and subsequently pressure politicians to take concrete action, said Boyd Reimer, who attended the Toronto-Danforth event.

“Human civilization is at a giant crossroads,” the 61-year-old said. “It's a watershed moment. We either take action away from the status quo or we face a catastrophic situation, which would involve massive human suffering …And I simply could not live with myself if I did not do anything about that.”

He said the most powerful moment of the debate was when Green Party candidate Maryem Tollar was overcome with emotion as she recounted her youngest son asking her “if we should start preparing for the apocalypse.”

Attendees and candidates broached topics like the link between climate change and local impacts such as worsening food insecurity. Having a space to localize the broad issue of climate change is important, said Van Exan, and these debates offer an opportunity to organize and follow up on important local issues once the election is decided.

In 2019, over 100 GreenPAC debates took place, but this year, the time pressure of a snap election at the end of summer, the presence of COVID-19, and the timing of religious holidays and the federal leaders’ debates limited organizers’ ability to set up the events.

One debate for Port Moody-Coquitlam and Coquitlam-Port Coquitlam had to be cancelled when the two Liberal candidates, Will Davis and Ron McKinnon, withdrew from the event on Tuesday. A Liberal representative cited “unforeseen circumstances” as the reason for their last-minute cancellation. Neither of the Conservative candidates responded to the invitation.

#100DebatesfortheEnvironment brought climate to the forefront this election. “Human civilization is at a giant crossroads,” said one attendee. "We either take action away from the status quo or we face a catastrophic situation." #cdnpoli #elxn44

Christina Gower, 49, was on the organizing committee along with “a hodgepodge of people trying to fight for the environment,” and said the cancellation was “really sad” but not entirely surprising.

“A lot of people put in a lot of work,” said Gower. “I'm very deeply disappointed that the opportunity to hear from our local candidates on the environment was lost.”

Despite the challenges, Van Exan said there were many individuals like Gower who stepped up and did their utmost to make these debates happen.

“We have to take this as a sign of how deeply Canadians care about making sure they have a good understanding of the climate plans (and environmental commitments) of their candidates,” she said.

Though her riding, Victoria, did not have an environment debate this election, NDP environment and climate change critic Laurel Collins said it’s great these conversations are happening in other ridings, and that the 2019 environmental debate in Victoria “was one of the most in-depth and meaningful debates that we had in the last election ... and an important opportunity for citizens to engage on this critical issue.”

“The climate crisis is putting everything that we value at risk …And we need members of Parliament (who) are going to act like this is the emergency that it is,” said Collins.

GreenPAC is still compiling data on how many candidates from each party attended and the number of viewers who tuned in, but one advantage of hosting the debates online is already revealing itself.

In the Ottawa Centre riding, 150 people attended the Zoom debate, but 380 people have watched the Facebook livestream of the event since then for a total of 530 views.

“If we're able to get up 72 recordings that people can watch when they have the time to listen thoughtfully and to think about how that affects their vote, that's an important resource for the public … and a resource that really becomes a tool for accountability down the road,” said Van Exan.

You can view the debates here as the videos are uploaded over the coming days.

The North Okanagan-Shuswap riding debate is scheduled for this evening, and 35-year-old Kristine Wickner said she is looking forward to asking the Liberal candidate about their climate platform.

Living in a Conservative stronghold, Wickner said her vote will likely go to the NDP or Green Party because the incremental, market-dependent climate plans of the Liberals and Conservatives are not what she thinks Canadians need.

In Reimer’s riding, the Conservative candidate did not participate, and he said anyone with kids shouldn’t be voting Conservative because their children will be left to deal with the inevitable fallout.

“I don't even have kids myself,” said Reimer. “But I do have a heart. And I could not live with myself if I allowed the scientific reality of climate change to create a catastrophic situation and create all that human suffering.”

I don't know what the future

I don't know what the future of the planet or of Canada's democracy may hold, but refocusing electoral politics to include more locality, such as in these debates seems like an incredibly good microcosm of a far better setup than our current one. This is a trend that should absolutely become the norm.