Private coalition pushes for green hydrogen. So why is Canada betting on blue? 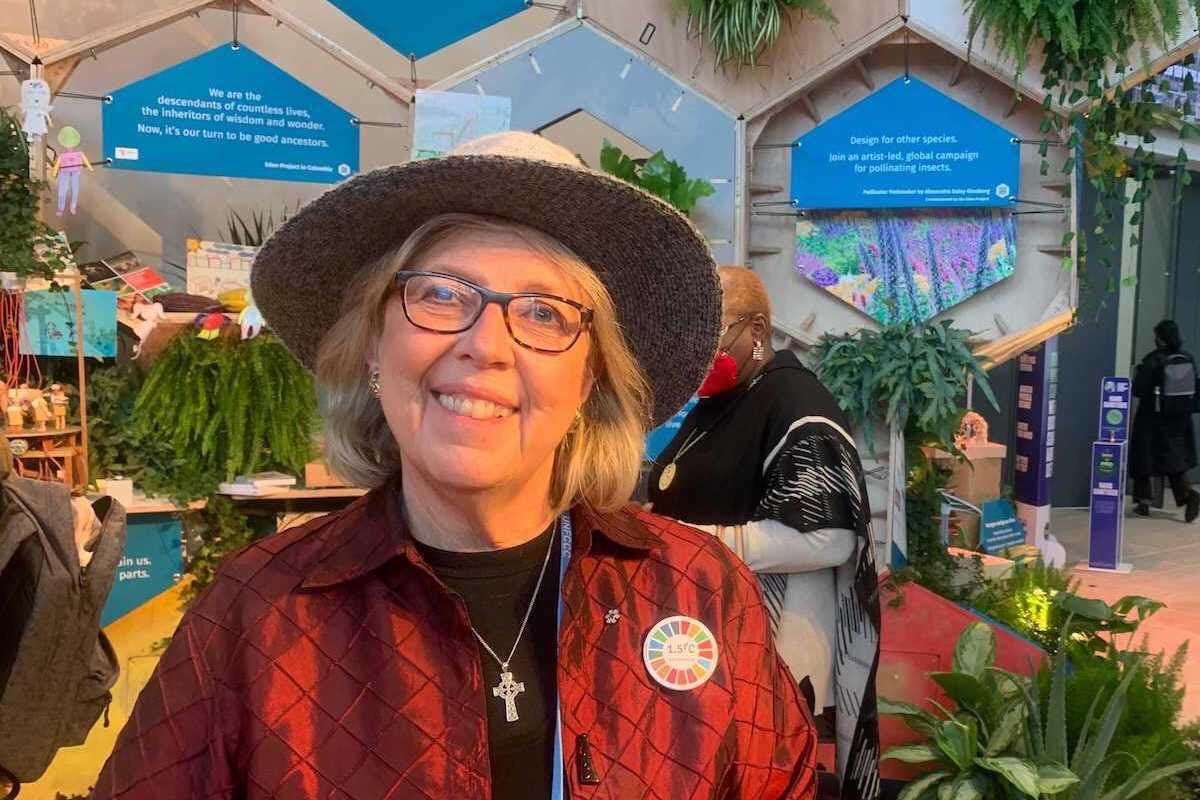 A global coalition of private companies is on a mission to scale up green hydrogen production and lower production costs so it is competitive with fossil fuels, begging the question of how Canada’s fossil-fuel-focused hydrogen strategy fits into the picture.

“Canada’s strategy on hydrogen is not green hydrogen, it’s a very dark hydrogen that does not pass the sniff test for: ‘Does this help us hold to 1.5 degrees,’” said Elizabeth May, the parliamentary leader of the Green Party.

Canada’s hydrogen strategy, released almost a year ago, places blue hydrogen at the centre of the strategy and a meeting note obtained by Canada’s National Observer through a federal access-to-information request revealed the federal government’s intentions to use existing infrastructure and grey hydrogen production to “kick-start Canada’s hydrogen economy” in the short-term.

May likened the strategy to developing a plan to stop lung cancer by selling cigarettes and using the funds to help people deal with their lung cancer.

“It’s a pretzel argument. You really have to tie yourself up into knots to believe it,” she said.

The concept of pursuing blue hydrogen and then switching to green later on doesn’t make sense, according to Julia Levin, senior program manager for climate and energy at the advocacy group Environmental Defence.

“The timeline for blue is not faster than the timeline for green,” said Levin. “We don't have blue hydrogen today; it takes a long time to develop carbon capture infrastructure”

“This is a new emerging sector where Canada could be a global leader. We do have enormous renewable potential to then create green hydrogen,” said Levin.

“But that's not what we're doing. We're setting ourselves up for failure in the space because of the pressure of the oil and gas sector.”

A coalition is pushing for increased green hydrogen production to increase uptake and lower production costs to compete with fossil fuels. But "with Canada lining up behind blue hydrogen," we may miss out, says @KarenTamWoohoo. #COP26 #COP26xCNO

NDP environment critic Laurel Collins said she thinks the government “should be doing more to invest in the research and development of green hydrogen fuel cells” and hopes “green hydrogen will be a central part of the just transition conversations the government has said they're going to be having.”

Canada’s National Observer spoke to Natural Resources Minister Jonathan Wilkinson at COP26 in Glasgow, Scotland, after Green Hydrogen Catapult announced its plans to accelerate green hydrogen production and achieve competitive costs of $2 a kilogram within the next five years in pursuit of keeping global warming to 1.5 C.

When it comes to green hydrogen, Wilkinson said there needs to be a significant cost reduction “because right now, it is expensive relative to the production of natural gas,” adding that compared to blue hydrogen, green is roughly double to four times as expensive, depending on the price of electricity.

“You've got to have very low-cost electricity in order to actually make green hydrogen economically viable,” he said, adding this can be achieved by deploying “very low-cost renewables.”

“In the short term and even the medium term ... blue is definitely less expensive, and I would say in certain jurisdictions, it's probably going to be less expensive for a long time,” said Wilkinson.

He says there are technologies now that can capture up to 95 per cent of emissions, but acknowledges that “probably needs to get to 100 at some point.”

Carbon capture rates could vary from 48 per cent captured by facilities operating today to the projected 95 per cent in proposed projects, according to new research by the Pembina Institute examining the carbon intensity of blue hydrogen production. The report indicates that there is a large gap between the technology available to us and the technology we need to produce low-carbon intensity blue hydrogen.

Wilkinson maintains there is a role for both blue and green hydrogen in Canada.

“In the long run, will green hydrogen actually win? Quite possibly, but that is a function of the costs,” he said.

One of the Catapult’s main goals is to drive the cost of producing green hydrogen below $2/kg, which would make it competitive with fossil fuels.

Achieving that price target is possible for many jurisdictions within the next five years, according to a report released Nov. 4 by the Rocky Mountain Institute done as part of the Green Hydrogen Catapult initiative.

The coalition of private sector companies is calling for policy and business leaders to set targets and update them every five years, ensure fair competition in energy markets for green and conventional fuels, and incentivize heavy industry sectors to adopt green hydrogen.

The private sector coalition was established on Dec, 8. 2020 and initially set a production target of 25 gigawatts (GW) by 2027 to accelerate green hydrogen production, but just announced a new heftier target of 45GW by 2027.

If these efforts can support the acceleration and uptake of green hydrogen to a point where it does start to bring down the price, that would be a huge breakthrough for the green hydrogen industry, said Karen Tam Wu, regional director for British Columbia at the Pembina Institute.

To reach net-zero by 2050, over 60 per cent of hydrogen in the world must be produced by electrolysis, according to the International Energy Agency’s roadmap to net-zero report.

“We know that there's a lot of discussion about providing tax credits to encourage (carbon capture) technology and that needs to be paired with financial incentives to also support the development of hydrogen from electrolyzers,” she said.

“What that means is with Canada lining up behind blue hydrogen, we may miss the opportunity to be able to capitalize on the market that is looking for green hydrogen,” said Tam Wu.

“We really do need to be looking at how we can identify and prioritize green hydrogen opportunities as soon as possible.”

Here’s a great explanation from Just Have A Think: https://youtu.be/2EA4tDYwNYo

I was about to supply that

I was about to supply that link to Dave Borlace's superb YouTube series too! I'm glad his research and ad-free broadcast efforts are spreading.

Quote from Wilkinson "In the

Quote from Wilkinson "In the long run, will green hydrogen actually win? Quite possibly, but that is a function of the costs". Precisely! Just pass regulations that require the proportion of carbon capture and sequestration to be 100% and do not provide any public funding whatsoever. If blue hydrogen is cost competitive on that basis, it should be used. Hydrogen is actually over-hyped though, and has been for decades. It is widely acknowledged that it useful for applications which require high grade (i.e high temperature, over 200 degrees C) heat as heat, not mechanical energy (as would be produced by an internal or external combustion engine, or fuel cell), which are almost all in the industrial sector. Such applications do not include space (eg. residential) heating, where electric heat pumps are much more energy efficient. Potential applications also include long distance air travel, where batteries are currently too heavy. In other cases, it is much more efficient to use green electricity directly, and store the energy chemically with batteries or mechanically, with compressed air, flywheels, liquid air, etc., where the overall conversion efficiency is much higher

Would we even be talking

Would we even be talking about green hydrogen if oil and gas companies weren't touting blue hydrogen?

I won't say hydrogen has zero role in a future economy. For instance, it's been pointed out that it could be a good way to store excess electricity from big solar farms, when they put out more than is needed on sunny days: Use the excess to make hydrogen, store it until the cold winter nights arrive, and burn it for power. That doesn't require big hydrogen transportation infrastructure, it's just stored and used on site. That could be useful.

But it's a small role. I don't see hydrogen powering any more planes than batteries do. Hydrogen for land vehicles is just stupid and inefficient compared to batteries (or power lines, in the case of trains and trolleys). Hydrogen for heating is stupid and inefficient compared to simply using electricity directly. Hydrogen might be useful for shipping. That could be important. But overall, the hype about hydrogen comes from fossil fuel companies. For the most part, not only talk about blue hydrogen, but talk about hydrogen AT ALL is just a distraction from electrification.

The comments by Wilkinson on

The comments by Wilkinson on the "lower" cost of blue hydrogen don't add up. Factor in the horrendous and so far unaccounted for cost of carbon capture and underground sequestration (CCS) and presto!, the cost is knocked out of the park. To date, CO2 is injected into the ground only to recover (through pressurization) the last dregs of oil and gas in previously depleted wells. Industry may call that "net zero", but what we really need is net negative.

A better and less costly method would be to recycle waste CO2 back into useful industrial processes such as making products from concrete that are structurally strengthened where carbon is sequestered in the material forever. This also removes that portion of waste CO2 from the emissions stream.

Including the real cost of CCS is a matter of economic and climate honesty. The evidence is emerging that regenerative agriculture and cover cropping is a profitable way top sequester far more carbon, in that scenario in the soil. Taking the rules of economics to green hydrogen means that significantly increasing the supply results in decreasing prices. Thus, climate policy should for all intents and purposes lead to far greater public and institutional investments into things like green H2.

Emerging technologies in low emission steel and cement prove that green hydrogen can play a huge role in heavy industry, and public investment should be directed there in due course. If demand is currently low, then create more! Direct subsidies into electric rail and the construction industry to catalyze the use of green steel and low emission concrete and to reduce their use with mass timber buildings made from sustainable forestry plantations.

This recently updated video on green steel is extremely informative. The narrator cites the small possibility that small nuclear reactors could join a growing fleet of wind turbines and solar farms to produce green hydrogen, and for direct distribution to cities and towns. In Canada the promise of base load geothermal power generation could erase this talk about SNRs except, perhaps, in Ontario where nuclear is already prevalent.

Back on this side of the pond the fellow who brought his research into electro-metallurgy and high capacity liquid metal batteries into the light through MIT and a company named Ambri (now being commercialized) also was instrumental in promoting his analysis in zero emission steelmaking through electrolysis alone (no hydrogen) has now started Boston Metal to help bring electricity + steel into the market. Look it up. It's very promising.