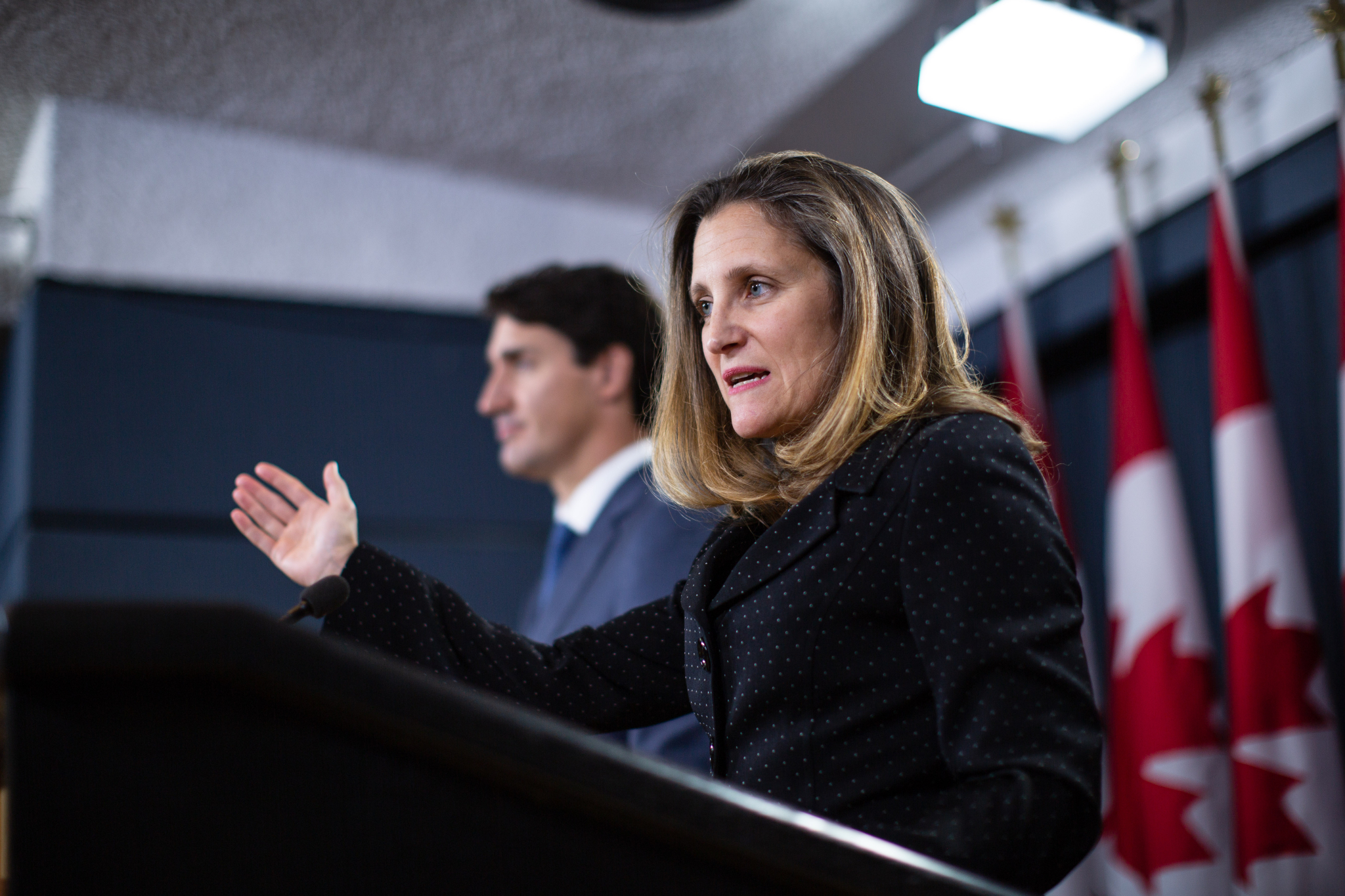 On Thursday, Finance Minister Chrystia Freeland will table the fall economic statement, which presents a fiscal overview and roadmap for the future. Photo by Alex Tétreault
Previous story

Canada’s finance minister will present a fiscal look-ahead Thursday as Canadians grapple with high inflation and an impending recession.

The fall economic statement gives an update on the state of Canada's economy and outlines the federal government’s plans for coming years. With affordability top of mind for Canadians, pressure to respond to the Inflation Reduction Act south of the border and signals from Finance Minister Chrystia Freeland that the government will exercise fiscal restraint, it remains to be seen what new spending and savings are on the menu.

Based on recent provincial updates, revenues “will likely be substantially higher than was forecasted in the spring budget,” and the deficit for the 2022-23 fiscal year will likely be “cut in half, roughly,” David Macdonald, a senior economist with the Canadian Centre for Policy Alternatives, told Canada’s National Observer. Compared to the spring forecast, deficits for the next four or five years will also be reduced by roughly half, he said.

This is a “really a big change in terms of what federal finances look like” and is mainly due to corporate profits going through the roof over this inflationary period, some of which is paid back to federal and provincial governments in corporate income taxes, said Macdonald.

It remains to be seen what the federal government will do with this “fiscal space,” which Macdonald says gives the federal government some additional room to help Canadians and provinces. This could materialize in a provincial health transfer or more inflationary offsets in addition to the suite of affordability measures introduced this fall, such as dental care for children, a housing benefit top-up and a temporary GST rebate hike.

A recent poll showed nearly 20 per cent of Canadians surveyed have reduced their meal sizes or skipped meals to save money. Conducted by the Canadian Hub for Applied and Social Research at the University of Saskatchewan, the poll surveyed 1,001 people between Sept. 6 and Oct. 17 about how they have coped with rising food costs.

A non-binding NDP motion to tackle high food prices recently passed with support from all parties, and shortly after, Canada’s Competition Bureau announced it will study competition in the grocery sector.

In a letter sent to Prime Minister Justin Trudeau last month, NDP Leader Jagmeet Singh said he expects a “much more robust strategy to protect Canadians against the effects of inflation and a coming recession.” The NDP wants to see measures to address “corporate greed,” introduce a windfall profits tax and accelerate investments to develop renewable energy and build houses and better infrastructure.

The letter also underscores the need for an “immediate reform of the Employment Insurance system,” something Bloc Québécois and NDP MPs have been calling for in question period.

The federal government temporarily expanded EI eligibility to help workers weather the COVID-19 pandemic, but it expired on Sept. 25. The government has promised to reform the EI program, but Canadian Labour Congress president Bea Bruske said it’s moving too slow and as a result, “many workers are being left out.”

After weeks of signalling fiscal restraint, @cafreeland will table the fall economic statement on Thursday, and economists and environmentalists will be watching closely to see what is — and isn't — included. #cdnpoli #FiscalUpdate #Affordability

Investments to shore up things like pharmacare, child care and long-term care are also key to ensure workers can actually participate in the labour market, Bruske told Canada’s National Observer.

“Our minister of finance has been really working very hard to set expectations … talking about fiscal discipline and not being able to compensate all Canadians for the rising cost of living, so we are not anticipating a huge amount of spending or anything like that,” said Bruske. “But we are really focused on the reality facing many workers right now, and that's that the rising cost of living is leaving many workers behind and that they need additional supports.”

On the other hand, some environmental non-governmental organizations, like Environmental Defence, worry the fiscal update will dole out more dollars for carbon capture technology. U.S. President Joe Biden’s Inflation Reduction Act contains a more generous subsidy to incentivize oil and gas companies to invest in the controversial technology and the industry.

The carbon capture investment tax credit Freeland introduced in Budget 2021 covers half the price of capital investments and will cost $2.6 billion over the next five years and then $1.5 billion annually until 2030. Oil companies previously asked the federal government to cover 75 per cent of costs, and oil industry executives maintain more funding and support will be needed to jumpstart investments. In order to compete with the U.S. tax credit, Canada must cover 85 per cent, the Canadian Association of Petroleum Producers told the federal government in a submission earlier this fall.

Environment Minister Steven Guilbeault recently called out the oil and gas industry for failing to invest in emissions reductions despite sky-high net earnings. An Environmental Defence press briefing questions the rationale of pumping taxpayer dollars into carbon capture when Canada has no investment or production tax credits for proven solutions, like renewable energy or battery storage. This is a stark contrast to the U.S.’s clean energy credits for onshore wind and solar projects, which start at 30 per cent and top out at 70 per cent, the briefing said.

I'm not gonna bet against

I'm not gonna bet against that.

"Finance Minister Chrystia Freeland indicated recently the government is examining changes included within the U.S. Inflation Reduction Act.
"'We are a leader in CCUS, both in terms of policy and in terms of actual activity on the ground. And we are absolutely determined not to give up that place leading the pack to anyone.'
"'I recognize that is going to take more government policies and more government investment.'"
"Varcoe: Energy a convenient political football as oilpatch profits take off" (Calgary Herald, Nov 02, 2022)