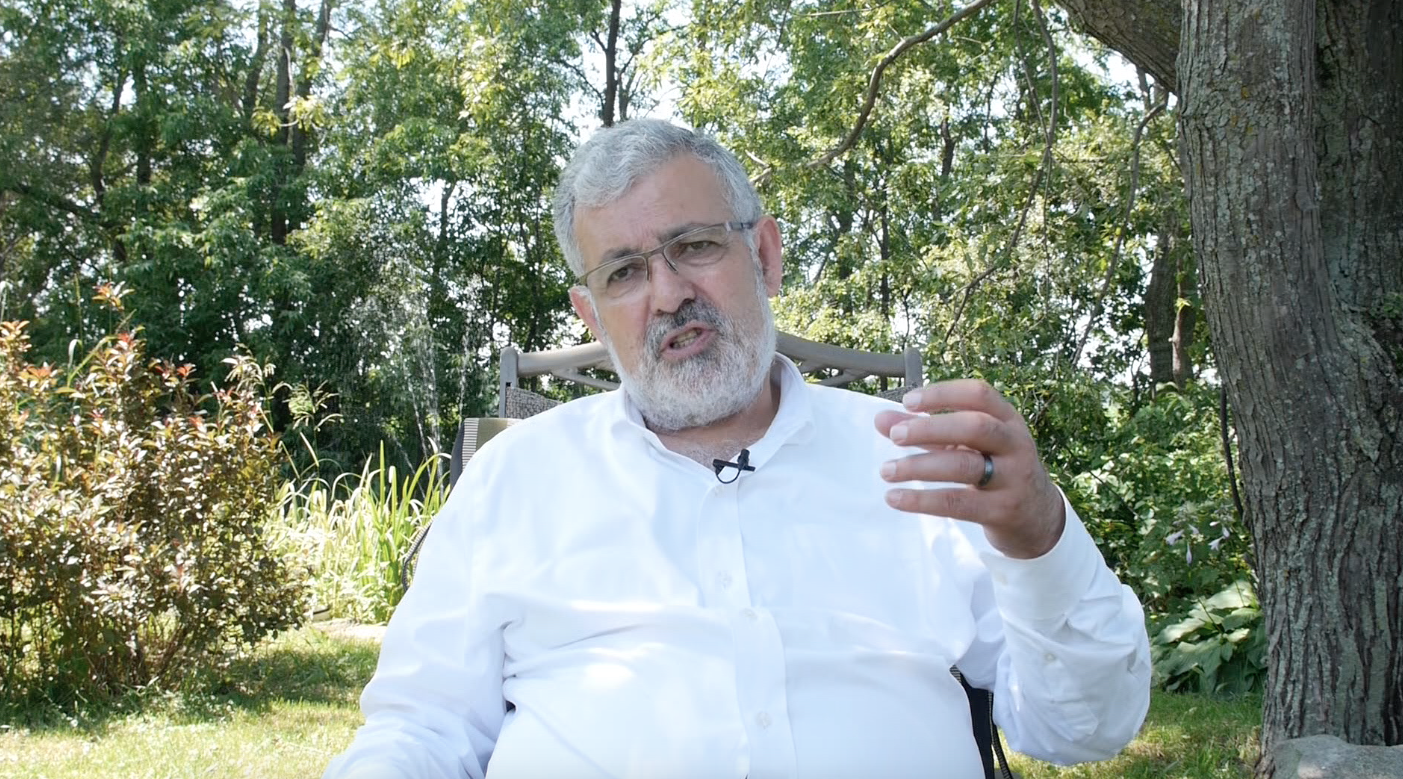 Imam Hassan Guillet spoke to National Observer at his orchard in Saint-Rémi, near Montreal in July 2017 about efforts to bring a cemetery for Muslims to Quebec City. Photo by Clothilde Goujard
Previous story
Next story

Imam Hassan Guillet had a hint of sadness mixed with alarm in his voice as he spoke about a small Quebec town's failed attempt at democracy.

"There were some people who were Islamophobes... A good Muslim for them is a dead Muslim. But they don't want to let them rest in peace either," he said in an interview outside his home. "And (then) there's this category of people — there are people who are misled and there are people who have a certain personal agenda."

Guillet, who garnered international media coverage last February when he eulogized the six Muslim victims of a mass shooting in a Quebec City mosque, was speaking about what he described as a "fiasco" in Saint-Apollinaire, Quebec.

Less than two dozen people voted on Sunday to reject having a Muslim cemetery on land that was owned by a local funeral home in the small town about 35 kilometres southwest of Quebec City. Their votes were enough to reject the project, since only 36 people showed up to vote. The town of about 6,000 people had limited the referendum to only 49 eligible voters who lived on property nearby the proposed cemetery site.

Imam Hassan Guillet sits down for an interview with National Observer outside his home in Saint-Rémi, Quebec. Video by Clothilde Goujard

A few hundred kilometres to the west at his green orchard in Saint-Rémi, near Montreal, Guillet said the vote was driven by intolerance and confusion. But he explained that all of society can learn valuable lessons about democracy and respect from the experience.

Surrounded by trees with all sorts of fruits, grapes, figs and raspberries, Guillet explained that these lessons, drawn from Saint-Apollinaire, go far beyond Quebec's borders.

"I see that people now realize the big mistake, we as a society, collectively made in this fiasco of Saint-Apollinaire and I know many people are looking forward to correcting this mistake."

But there is a lot of work to do. Days before the vote, someone mailed the mosque — the Islamic Cultural Centre of Quebec City — a defaced Qur'an along with a racist message, prompting a police investigation, the CBC reported.

Guillet blamed an obscure group, La Meute, for spreading false information and interfering in the referendum campaign. La Meute has been described by multiple media outlets as a far right group.

In a profile last December, the CBC described it as a "secretive group with 43,000 members" that runs a Facebook page and actively campaigns against what it describes as "Islamic fundamentalism."

Quebec City Mayor Régis Labeaume has also criticized the group's involvement in the referendum after the results came in.

"We won't accept anything on their part... that could resemble a provocation to violence," Labeaume said in a report by the CBC. "We don't need private militias to take care of that... We are in a society of laws, a democratic society."

​Shock and disappointment were palpable after the referendum results were announced. The mayor of Saint-Apollinaire had been in favour of the project. The owner of the funeral home, Harmonia, had agreed to sell his land to the Islamic Cultural Centre of Quebec City. Both were surprised, as were many Muslim leaders and members of the community.

Guillet worked with the mosque, following the January mass shooting, to help engage locals about their proposal for a new cemetery. He explained that it was important to have profound discussions with the non-Muslim community to allay their concerns and build trust.

"They started with aggressive questions and slowly they started to calm down, and cool down and to be friendly. At the end, people came with tears in (their) eyes and took us in their arms and they were very supportive so we thought that after all the good faith, the good will will prevail. Unfortunately it didn't," he said.

He said he felt political, civic and religious leaders in Quebec had been supportive, but wonders if it was enough.

"If they (had been) vocal enough, we would not be in the cul de sac we are in today... I appeal to the political leadership, and the civic leadership and all the leadership, we should be very very active. Up to now, we've been the silent majority," Guillet said.

Several politicians, including Quebec City Mayor Labeaume and Quebec Premier Philippe Couillard have also expressed their disappointment at the outcome of the referendum.

"I find it disappointing, I'm saddened by the result," Couillard told reporters while attending a premiers' meeting in Edmonton on Tuesday. "I don't think what happened there is favourable for Quebec's image."

Couillard dismissed criticism the provincial government did not get involved in the referendum campaign.

That said, Couillard says the province will now turn its attention to finding a solution.

"I want to encourage people to be more vocal, to be more present. We should start seeing the good side of us on social media, in the streets and in life instead of letting a very very tiny minority kidnap our life and our future and our values."

Guillet added that the critics are the ones who are making it difficult for Muslims to integrate.

"If these Muslims went to send their beloved one to be buried outside of Canada, the same people who are crying now (that) they don't want us to bury our dead here, they will cry to say, 'see they're not integrated, they don't belong, they want to send their dead to their country of origin because they're still living in their country of origin in their mind even though their body is here but their mind is there,'" said Guillet. "If I, because I was born in Lebanon, they can say to me go and be buried in Lebanon, what about my kids who were born, how about my wife who's born here? There are so many Muslims who are not born outside, there are so many Canadian-born Muslims."

He explained Jewish, Protestant and Catholic creeds have their cemeteries and Muslims should have the right to have their own. Moreover, he said the Muslim sections in nondenominational cemeteries are considered to be temporary spots that are rented out. In a Muslim cemetery, the families would know that their departed loved ones have a permanent resting place, he said.

Guillet continues to work with the leaders of the Islamic Cultural Centre of Quebec City to figure out a "roadmap". Their three options include pursuing discussions with the city of Saint-Apollinaire, finding a different city, or going to court, although the last option is the least preferred.

The Islamic Cultural Centre of Quebec City and four other mosques in Quebec City invited members of their faith to participate in a public information session Tuesday evening about the steps they will be taking after the referendum. Guillet, who planned to attend the session, remains optimistic that there will eventually be a Muslim cemetery in the region of Quebec City.

"Sooner or later, good will will prevail. Deep in my heart, I don't think Quebec rejects its Muslim citizens. I don't think so. There was so much misinformation, there was some campaign of fear, and now this Saint-Apollinaire episode opened many eyes. We are receiving many phone calls, we are receiving ... support in the papers, on the phone," Guillet said.

He hopes that this will not stain Quebec's image and insists Islamophobia, racism and discrimination are everywhere.

I think we've pretended for

I think we've pretended for far too many years, that in Canada we are good, tolerate, multicultural people. I've thought this was rhetoric for a long time. Not that most people spend a lot of time vilifying others, but we mostly don't have many opportunities to interact with people of different cultures and beliefs.

There is a global modernism, a cell phone, social media culture where everyone looks alike, and pursues similar goals. We're told to strive for consensus, not wade into religious or political divides. So, in theory, we're multicultural. In theory, we also want reconciliation with indigenous people. But the reality of racism is seen in what we do and don't do..........and often, we're blind to it. A striking example of that was the Jean Baptiste parade this year..........where old gals like me, all in white, tried to dance behind a float, also mostly in white....and blue. Meanwhile, young men of colour pushed the float, in time honoured service to the new liberral 'sustainability' values.

No one was to blame. No one planned the vision. But it was there, for all to see.

It is often what we are willfully unconscious of...that best captures our deep values. Many Canadians fear Islam. The wars in the Middle East have made it worse, because now they are here...among us....and beneath our veneers of civilized tolerance, WE KNOW WHAT WE IN THE WEST HAVE DONE TO THEIR COUNTRIES OF ORIGIN.

Wanting to deny that.....AND....to be safe from the blowback we know in our hearts is likely from that......is what fuels a lot of Islamophobia. We fear the victims of our imperialist wars.

The far right, caught in a past that gave white Christian men many absolute advantages, fears them for the old reasons.........racial superiority, religious bigotry, absolute patriarchal rights. But the new Islamophobia is part of the refugee crisis American foreign policy has unleashed.

And we know it can only get worse.