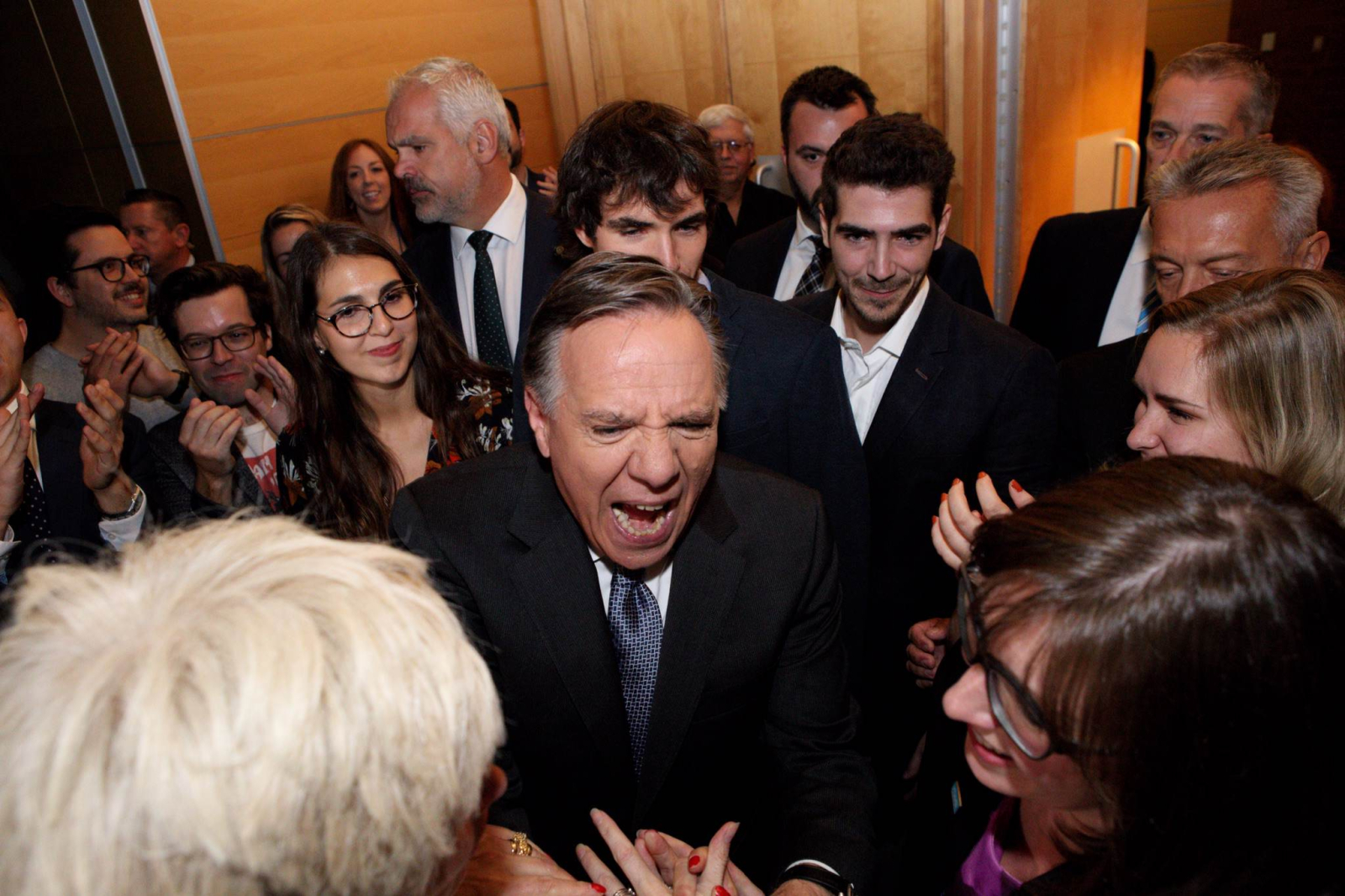 Quebec's election is finally over, and whether one is happy with the results or not, there’s no denying that last night was one for the history books.

The big question now is whether history will be kind to Quebec for resoundingly electing a majority, first-time Coalition Avenir Québec (CAQ) government without the checks and balances of a strong opposition.

In an extraordinary change of guard, François Legault’s right-of-centre federalist party swept into power with 74 seats, ending almost 50 years of two-party rule. The Quebec Liberals saw their support base shrink dramatically, winning only one quarter of the popular vote, which translated into 32 seats.

The left-of-centre Quebec solidaire (QS) tripled its seats, and for the very first time, gained support and recognition beyond the island of Montreal in a spectacular showing that exceeded partisan expectations, with 10 elected members. What used to be the established choice for Quebec separatists, the Parti Québécois (PQ), appeared sclerotic next to the emerging QS, as it lost official party status, winning just nine seats.

Quebecers seem to have tossed the political establishment ceremoniously aside for the still-new CAQ, which has never before formed government, and the QS, which is seen by many as the ideological and spiritual leader of the now almost-defunct PQ.

A major tectonic shift has undoubtedly taken place in this province; one that won’t fully be visible until perhaps the next election. What this all means for Quebec, one can only guess, as people vacillate between jubilation, frustration, disappointment, confusion, and fear.

In many ways, last night was indeed the “historical political realignment” POLITICO Pro Canada editor Alexander Panetta described on Twitter. For the first time in decades, Quebec's independence wasn’t raised as a major election issue — it was barely an afterthought. Interest in independence is historically low in Quebec (particularly among young voters) and while that doesn’t mean it can’t be revived at the drop of a hat, it’s on the back burner for now. That allowed Quebecers to vote based on other priority issues, and in doing so, freeing them of any need for strategic voting.

The province's two long-established parties, the Quebec Liberals and the PQ, swallowed a bitter pill last night, as voters sent a clear message that they want change; for old parties to collapse and new blood to emerge. Only, the CAQ isn’t new blood.

CAQ is more of the same

In their desire to “stick it” to the establishment, many Quebecers don’t seem overly concerned by the major debates of our era, writes @ToulasTake #electionqc #QuebecElection #qcpoli

Despite its relatively new party status, in many ways, the CAQ is more of the same: either a centre-right party that is seen as a conservative alternative by many middle-of-the-political-spectrum voters, or an alarmingly right-of-centre party to progressive voters, with plans to enact major budgetary cuts of its own, or as “moderate left” if you’re Conrad Black and completely out of touch with Quebec reality.

Regardless of definitions, the CAQ is a party that campaigned on a lot of negatives in its relentless pursuit of power.

After polls closed in Quebec last night, Maclean’s senior writer Paul Wells wrote that “the CAQ is what’s left over when you’re fed up to here with the other parties,” and he’s not wrong. Even though Legault had a bumbling campaign, was unable to adequately explain his immigration plan, and was forced to tackle numerous political micro-scandals, the CAQ benefitted from the fatigue and frustration of Quebec voters. He just happened to be there, waiting in the wings, offering them enough populism and immigrant scapegoating with just the right soupçon of "Dad knows best" business-suit, pro-entrepreneurship economics to fit the bill.

While the QS’s impressive rise is a sign that Quebec can be progressive in many areas, the CAQ’s majority win is also a confirmation of its conservative, protectionist instincts when it comes to immigration, language, and culture. There is no doubt that Legault’s language test proposal for immigrants and tough talk of possible expulsion (even if not within his provincial powers) appealed to many Quebecers who, disappointingly, continue to see immigrants as a threat to their way of life, instead of a lifeline they are for its future economic viability.

While Legault's win can definitely be attributed to a number of factors — the need for change being one of them — it's also a sad testament to the fact that tribalism, fear-mongering and xenophobia were powerful motivators for enough people to vote for him. And if not outright motivators, they were simply not enough of a deterrence to abstain from voting for him, which is just as disconcerting.

Throughout this election, I often found myself a political orphan inhabiting this uncomfortable no-man’s land, stuck somewhere between morose apathy and intense curiosity. This election's cacophonous, frenzied, ‘Lets try anything and see if it sticks,’ campaigns reminded me of how reactionary the political game has become and how disappointing the process can often be. It left me tired, disillusioned, indecisive, and for the very first time, undecided about where I to cast my vote.

Turns out, I wasn’t the only one. Voter turnout was 66.44 per cent, which is unimpressive for Quebec, seeing as the turnout was 71.44 per cent in 2014 and 74.6 per cent in 2012. After the number crunching was over, it was obvious that many disillusioned anglophones and allophones, didn’t feel particularly compelled to cast their vote, thus, contributing to the Liberals’ demise, while ensuring a CAQ majority government with only 38 per cent of the popular vote.

During her speech, QS co-spokesperson Manon Massé said “the political landscape in Quebec has changed for the good.” It's a shortsighted statement, although understandable, given the moment of victory she was savouring. Change has indeed been achieved, but it has come at the hands of a clearly polarized Quebec, and — with the annihilation of the PQ — a reduced presence of left-of-centre progressive politics.

Quebec will now have 106 seats in the National Assembly occupied by centre-right parties, and only 19 seats filled by left-of-centre candidates. The party that now holds majority power not only campaigned on the backs of minority rights with its inflexible insistence on removing religious symbols from public office (now confirmed as happening in a tweet by Globe and Mail reporter Les Perraux, who specifically asked Legault that question), but barely has an environmental policy to speak of. While the CAQ isn't an outright climate crisis denier and it supports the cap-and-trade system, which aims to reduce GHG emissions, the party's platform still doesn't go nearly far enough to fight the climate crisis. In a Radio-Canada interview earlier this year, Legault stated that that he wasn't ruling out shale fracking in Quebec’s grand nord for "socially acceptable" projects.

In their desire to “stick it” to the establishment, many Quebecers don’t seem overly concerned by the major debates of our era – the rise of populism and intolerance, the climate crisis, and increased protectionism that time and again, translates into widespread immigrant and diversity bashing. So while many Quebecers voted against austerity, against neo-Liberalism and against sovereignty, I wonder, were they paying attention to what they voted for? And if they did, did they not care because it didn't directly or immediately affect them?

While Legault’s victory speech last night was admittedly conciliatory and unifying, promising that his government will be everyone’s government and that Quebecers share much more than what divides them, one can’t help but wonder what that kind of talk means when it has been preceded by months of fear-mongering and “us vs. them” rhetoric that pits immigrants as a problem that needs to be solved.

I want to be comfortable with last night’s results, but I am not. Rhetoric like that affects real people who suffer real consequences when it legitimizes and sanctions anti-immigrant sentiment and xenophobia. With right-wing populism currently infecting Canadian federal and provincial politics, Legault's discourse is irresponsible and dangerous, and propagates the divisive message that French culture and language is threatened by new immigrants.

Unlike writer H. L. Mencken, who sourly said "democracy is a pathetic belief in the collective wisdom of individual ignorance,” I firmly believe that democracy, as flawed and messy and convoluted as it can often be, is still the best system at our disposal.

So, now that the votes have been counted, Quebecers must keep plugging away and celebrating the victories as they come. For the first time in the province's history, for example, a record 41 per cent of women candidates were elected and will sit in the National Assembly. Quebecers must remain vigilant, raise the bar when it’s possible and remain confident in the belief that democracy can elevate and improve our social networks, our legislative process, and our overall quality of life.

One thing is certain; Quebec’s political landscape has been irrevocably altered. While there is much to be concerned about in yesterday’s results, there is also much to be excited about. Change for the sake of change isn’t always a good thing, but is sometimes the necessary step that precedes sustainable change for the better.

One can not call it democracy

One can not call it democracy when 38% of the votes yields 100% of the power.

True. If the CAQ is true to

True. If the CAQ is true to their promise and implements mixed member proportional, at least something good will have come out of this.