'Pointing out the obvious': Alberta energy minister stands behind her comments 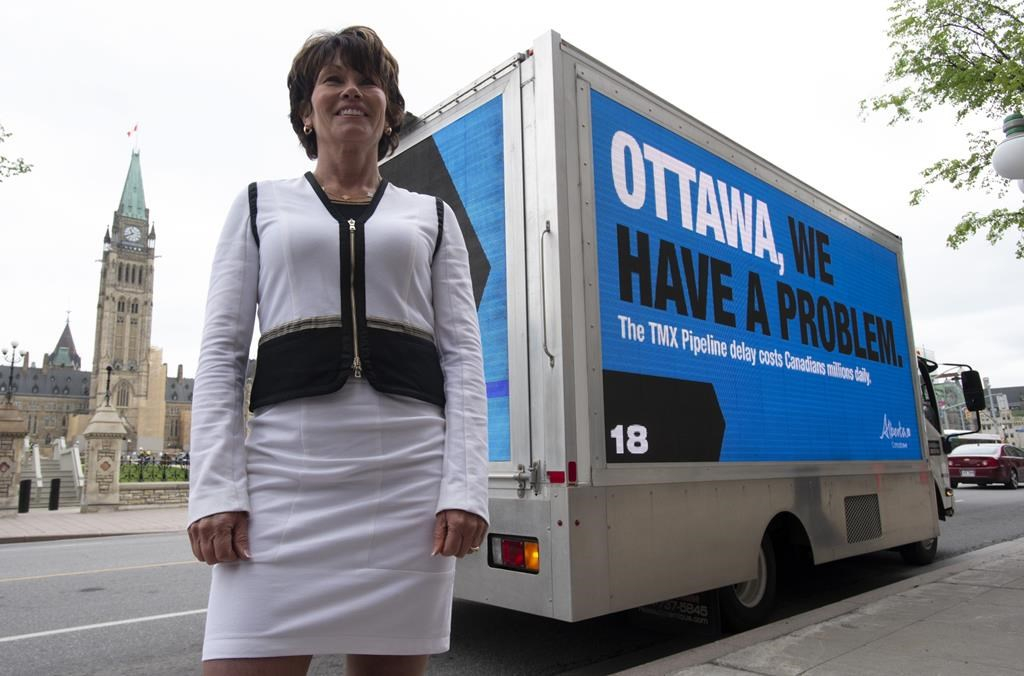 Alberta energy Minister Sonya Savage poses in front of the Parliament Buildings in Ottawa on May 29, 2019. File photo by The Canadian Press/Adrian Wyld
Previous story
Next story

"I don't think anybody should be surprised that Alberta is pro-pipeline," Sonya Savage said Tuesday in an interview.

On Friday, Savage spoke on a podcast held by an industry group.

"Now is a great time to be building a pipeline, because you can't have protests of more than 15 people," the energy minister said. "Let's get it built."

In the podcast, Savage goes on to say that economic uncertainty caused by the pandemic will trump other concerns. She echoed those remarks Tuesday in reference to rail blockades earlier this year held to protest the Coastal GasLink pipeline expansion.

"Coming out of this situation we need jobs," she said.

Both the Independent newspaper and the BBC in the United Kingdom published her remarks, as did Fox News in the United States. Swedish climate activist Greta Thunberg also put them on her Twitter feed.

"At least we are seeing some honesty for once," she wrote. "Unfortunately this (is) how large parts of the world are run."

'Pointing out the obvious:' Alberta stands by energy minister's comments

"She was quite rightly just pointing out the obvious that at this moment, because of COVID, there is probably less people taking the opportunity to go out and protest pipelines," Nixon said Tuesday.

The Alberta energy industry's reputation faces increasing pressure. Some of the world's largest investment funds have restricted their activity in the province because of environmental concerns. In February, Teck Resources pulled out of a multibillion-dollar oilsands project because of what it said was a regulatory environment unable to reconcile resource development and climate concerns.

"This is going to contribute to it," he said.

Still, the comments are consistent with everything Jason Kenney's United Conservative government has been saying, said Bratt.

"It's a very narrow interest. It's an appeal to people in Alberta that want somebody fighting for them. I didn't think (when it began) that this type of approach would work, but they're going ahead with it."

The Opposition NDP's energy critic, Irfan Sabir, also suggested that Savage's comments, combined with the province suspending environmental monitoring in the oilpatch, will make it harder to attract international investors to the industry.

Savage's remarks express how the government views people who disagree with it as wrong, corrupt and hypocritical, Bratt said.

Alberta has introduced legislation imposing stiff fines and possible jail terms for protesters who damage or interfere with the operation of a wide range of energy infrastructure, although such acts are already illegal. The bill remains before the legislature.

"Albertans want to get back

"Albertans want to get back to work ...," she says, clearly not understanding that the Alberta government, and especially its minister, represents all Albertans. This includes Albertans who favour more progressive energy sources, adequate environmental controls and remediation, First Nations and farmers who have had it with big oil trashing and polluting their land, and others who have to resort to protests to get their voices heard.

This fundament of democracy escapes most Neo-Conservatives and Neo-Liberals. The pandemic is proving, in spades, all of their flawed thinking and actions.

Do I detect wisps of 'The

Do I detect wisps of 'The Shock Doctrine'? Taking advantage of a crisis to advance an economic agenda regardless of the negative effect on the planet and those who live on it.

...still haven't heard any answers to my question "Are fossil fuel extraction jobs the ONLY jobs anyone in Alberta is PERMITTED to do?!!"

As people around the world

As people around the world have reacted to this tone deaf person, what is amazing is how totally tone deaf the government of Alberta actually has become in its totality. They are truly little more than shills for multi national oil corporations, living on the lie that Alberta does not exist without oil.