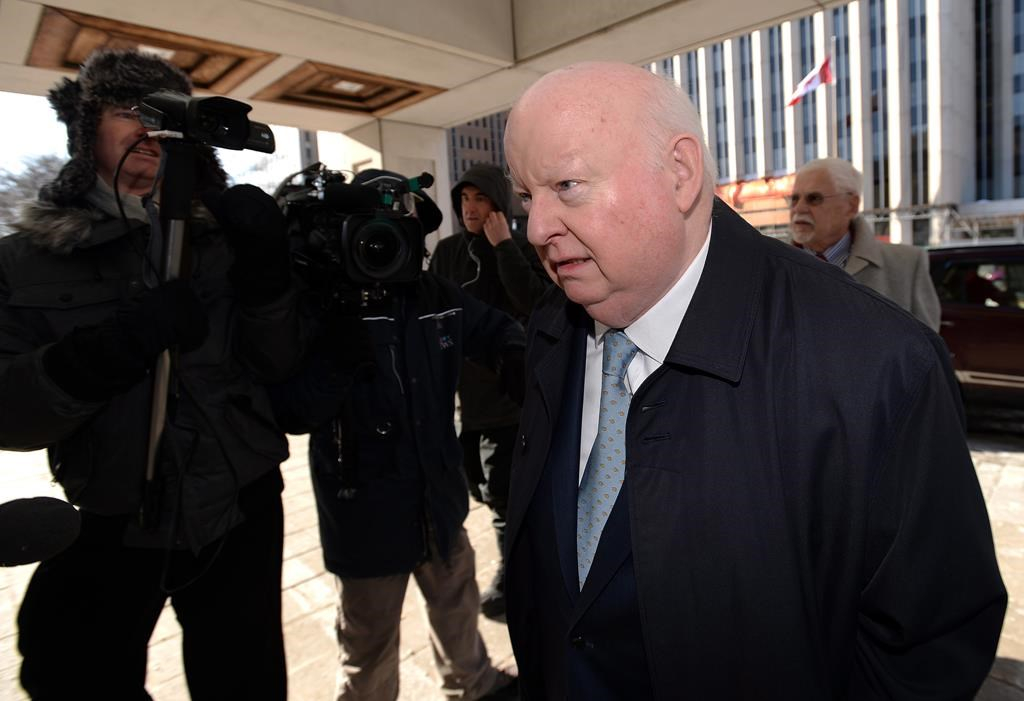 Sen. Mike Duffy walked slowly out of an Ottawa courtroom Thursday afternoon, surrounded by journalists and supporters, with a hint of a smile on his face.

I'm going to sit with the old guys here, Duffy said, dismissing questions from a small crowd of reporters.

A much larger crowd was awaiting outside, some cheering as they saw him finally emerge from a saga that started with a scathing audit about Senate spending that was released in 2012.

Duffy, a veteran journalist appointed to the Senate by former prime minister Stephen Harper, was acquitted on Thursday of all 31 criminal charges against him, including allegations that he accepted a bribe, committed fraud and abused the public trust in his position as a Canadian senator. None of those allegations, including claims of fraudulent housing and travel charges billed to the taxpayer, were strong enough to result in a conviction, said Ontario Court Justice Charles Vaillancourt.

Instead, Vaillancourt confirmed Duffy's theories that the entire trial was the result of a conspiracy orchestrated by Harper's office to cover up its embarrassment about how senators were spending public money. The plotting by Harper's top lieutenants was confirmed in a series of emails, released in the trial, that showed the inner workings of the "ruthless" but "hard-working" staffers in the former prime minister's office, Vaillancourt said.

"The political, covert, relentless, unfolding of events is mindboggling and shocking," an animated Vaillancourt said, hours into his 308 page ruling, delivered in an Ontario Court of Justice courtroom in Ottawa. "The precision and planning of the exercise would make any military commander proud. However, in the context of a democratic society, the plotting as revealed in the emails can only be described as unacceptable."

Vaillancourt said the emails showed that the PMO staffers were very active behind the scenes in their efforts to pressure Duffy to go along with their plan to make their embarrassing political problem go away.

They wanted him to admit his expenses were inappropriate, reimburse the money and to stop talking about it, the emails showed.

The judge was also critical of crown attorneys Mark Holmes and Jason Neubauer for failing to prove beyond a reasonable doubt that Duffy had committed a crime. Instead, Vaillancourt said that the actions of Harper's former chief of staff, Nigel Wright, and other Conservative staffers were more troubling. Wright had appeared as a star witness for the crown as part of its case that Duffy allegedly accepted a bribe to reimburse travel and housing expenses.

Duffy had been charged with accepting a bribe over the $90,000 payment from Wright made to cover expenses that were deemed to be inappropriate. Wright was not accused by the crown of doing anything inappropriate.

"Mr. Neubauer stated that Senator Duffy’s actions were driven by deceit, manipulations and carried out in a clandestine manner representing a serious and marked standard expected of a person in Senator Duffy’s position of trust," Vaillancourt said in the ruling. "I find that if one were to substitute the PMO, Nigel Wright and others for Senator Duffy in the aforementioned sentence that you would have a more accurate statement."

Outside the courtroom, one former Conservative campaign worker praised the ruling, saying it explained exactly why Canadians had rejected Harper in the 2015 election campaign, reducing the party to opposition status in the House of Commons.

"This is justice," said Jordan Kent, a university student who said he campaigned for several Conservative candidates in the last election, but was disappointed by what he learned from the trial.

Duffy's lawyer, Donald Bayne, described the decision as a "resounding aquittal" noting his client had suffered through lengthy and excessive public humiliation.

As he began reading his ruling in the morning, Vaillancourt said that some Canadians may have already made up their minds before hearing any of the evidence. That included a man he saw near the courthouse, when the trial was beginning, who asked if he was connected to the case.

Vaillancourt said the exchange highlighted the importance, to him, of the presumption of innocence in the Canadian legal system.

"I think it is fair to say that many people may share the belief that once someone is charged with a criminal offence they are guilty," Vaillancourt said. "This is not the law of the land."

Vaillancourt said the crown had failed to prove its case beyond a reasonable doubt that Duffy had deliberately tried to break rules by claiming that his summer cottage in Prince Edward Island was a primary residence. Vaillancourt also dismissed multiple counts of fraud on travel claims in his lengthy 308 page ruling, before the court recessed for a lunch break.

“This case provided me with ample opportunity to assess the credibility of Senator Duffy," Vaillancourt said in his ruling. "He was on the stand for many hours (and) at the end of the day I find that Senator Duffy is an overall credible witness.”

Justice Vaillancourt also said that the credibility of Senate was not what was on trial: “As interesting as these issues may be, they are not the subject matter before this court."

He said the evidence reasonably supports the conclusion that there was no meaningful training of senators by the government, and that former Prime Minister Stephen Harper had reassured Duffy that his Prince Edward Island cottage qualified as his primary residence.

Duffy stared ahead as Vaillancourt read the verdict. The judge paused at times to take sips of water or to glance at the senator and others in the courtroom.

Vaillancourt noted that Duffy's emails showed he maintained his innocence throughout the media storm, and did not want to take the fall. He said it was regrettable that the Prime Minister's Office appeared to see the problem as one Senator—Mike Duffy, rather than a broader issue

Duffy was accused of mishandling his living, travel, and office expenses in his first four years as a senator beginning in 2008. He agreed to repay $90,000 in questionable housing expenses after the Senate hired an external auditing firm to review his residence claims three years ago, but faced criminal charges for his conduct in 2014 when the RCMP conducted a formal investigation.

The former journalist had testified that he didn't "break the rules" and maintained that his expense claims were legal. He did however, concede that he had inadvertently billed taxpayers for about $7 of expenses related to two personal photos.

Duffy is expected to be immediately reinstated to the Senate with access to pay and office resources, and permitted to take his seat in the Chamber at the next scheduled sitting.

Since the trial launched in 2015, National Observer has delivered groundbreaking coverage of its proceedings both from the Ottawa courthouse, and through careful analysis of Duffy's redacted diary.

Its work in revealing links between the senator, then-prime minister Stephen Harper and oil giant Enbridge prompted questioning in the House of Commons, earned it a 'scoop' investigative reporting nomination from the Canadian Association of Journalists earlier this year, and recognition as a finalist by the Canadian Journalism Foundation for the Jackman Award for Excellence.

With files from Elizabeth McSheffrey