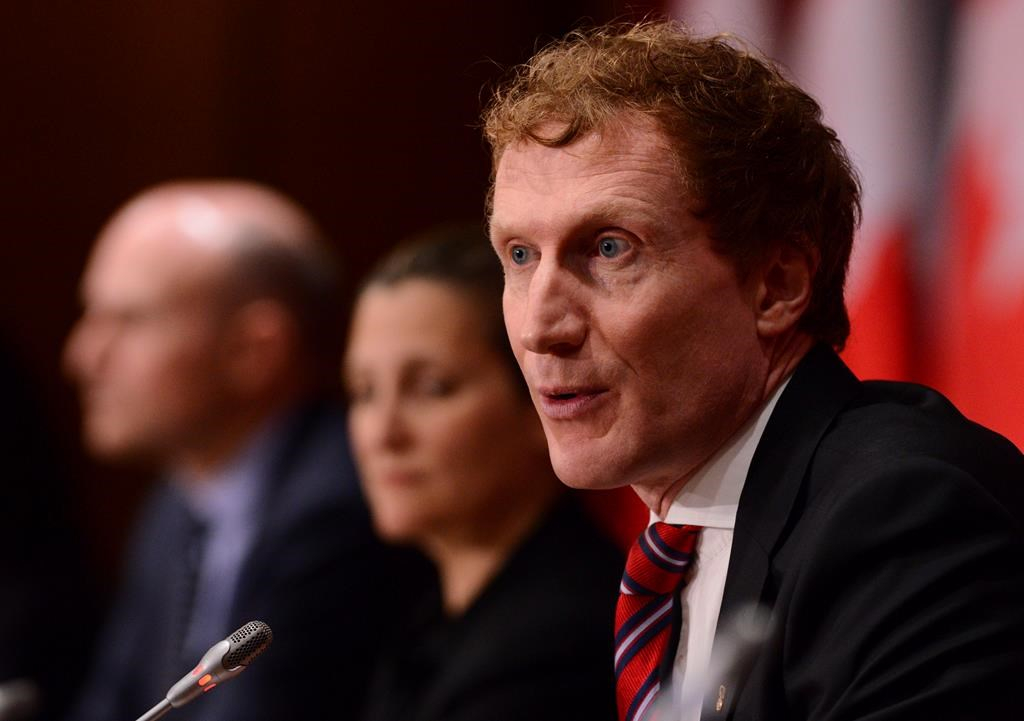 Minister of Indigenous Services Marc Miller joins fellow ministers and Government of Canada officials as they hold a news conference to provide an update on COVID-19 on Parliament Hill in Ottawa on Apr.30, 2020. Photo by The Canadian Press/Sean Kilpatric
Previous story
Next story

Canada took further baby steps toward post-pandemic normalcy on Friday as Atlantic provinces began easing rigid restrictions imposed to curb the COVID-19 scourge, while Quebec's death toll climbed past 2,000 as it set to ease its measures.

Elective surgeries and other non-urgent health-care services, including physiotherapy and optometry, restarted in Prince Edward Island, as did outdoor gatherings of up to five people from different households and non-contact outdoor recreational activities.

Nova Scotia reopened garden centres and nurseries, along with trails and provincial and municipal parks. It also allowed single families to head to their cottages. New Brunswick had already OK'd interactions between two families, a return to school for post-secondary students, as well as golfing, fishing and hunting.

Quebec, with the largest number of COVID-19 cases and deaths in Canada, was set to reopen retail stores outside Montreal on Monday, despite reporting 163 new COVID fatalities going into the weekend. The province also said it aimed to double testing — to 14,000 a day — by the end of next week.

Ontario, which reported 421 new cases and 39 more deaths, most in long-term care facilities, also said some workplaces and businesses can restart Monday. Those include garden centres with curb-side pickup, lawn-care and landscaping services, and automatic car washes.

"Our patience is paying off," said Premier Doug Ford, who urged people to maintain physical distancing regardless. "We're getting closer and closer to opening things up."

Many non-essential businesses in Manitoba — retail stores and hair salons among them — are also set to open their doors on Monday.

The stiff stay-home restrictions that have idled much of the economy have plunged the country into a recession, according to a new report by the C.D. Howe Institute. Still, federal and provincial governments have called for a gradual and phased approach to a return to normalcy informed by public health concerns.

When it comes to reopening schools and child-care centres, Canada's top public health officer, Dr. Theresa Tam, said distancing restrictions and strict cleaning were crucial for protecting adults who work in them, even if the virus appears to be less dangerous for the youngsters themselves.

Tam has also warned about the risk coronavirus disease poses to Indigenous communities, which are considered vulnerable due to often overcrowded living conditions and a lack of health-care services. To date, reserves have seen at least 129 cases and Inuit communities 16. Saskatchewan reported a jump of 26 cases, 19 of which were from in and around La Loche, a Dene village 600 kilometres northwest of Saskatoon.

What the government has been doing to prevent COVID-19 from ripping through the communities was the subject of a standing committee on Friday, with members of Parliament putting cabinet ministers on the hot seat. Indigenous Services Minister Marc Miller conceded the $15 million in emergency funding earmarked to help organizations that service Indigenous urban populations was not enough.

The Senate, meanwhile, passed legislation authorizing $9 billion worth of emergency financial support for students who can't find or are unable to work this summer due to the pandemic. The bill received royal assent shortly thereafter.

Under the new Canada Student Emergency Benefit, eligible students will receive $1,250 per month student benefit from May through August. Those with dependents or permanent disabilities will receive $2,000 per month.

The contagious SARS-CoV-2 virus, which has now killed more than 3,220 people in Canada and 270,000 globally, is believed to have originated in China. U.S. President Donald Trump has suggested Beijing withheld information about its epidemic from the World Health Organization and that the agency tried to cover up the initial outbreak.

Trump supporters have also pushed a conspiracy theory that the pandemic originated in a laboratory in Wuhan, China.

In Ottawa, Beijing's ambassador praised Canada's "cool-headed" co-operation in battling the spread of the disease. The United States, according to Ambassador Cong Peiwu, was "smearing" his country.

"To shift the blame, some U.S. politicians try to launch a stigmatization campaign against China," the envoy said. "Attacking and discrediting other countries will not save the time and lives lost."

In other developments, Newfoundland and Labrador has released 65 inmates under the public health emergency declared on March 18. So far, the province's jails have been COVID-free but at least 285 federal prisoners, one of whom has died, and 82 guards have tested positive.

In Chatham-Kent, Ont., police said someone hacked an online meeting for a local charity this week and broadcast child pornography to 200 participants.

-With files from Canadian Press staff across the country.