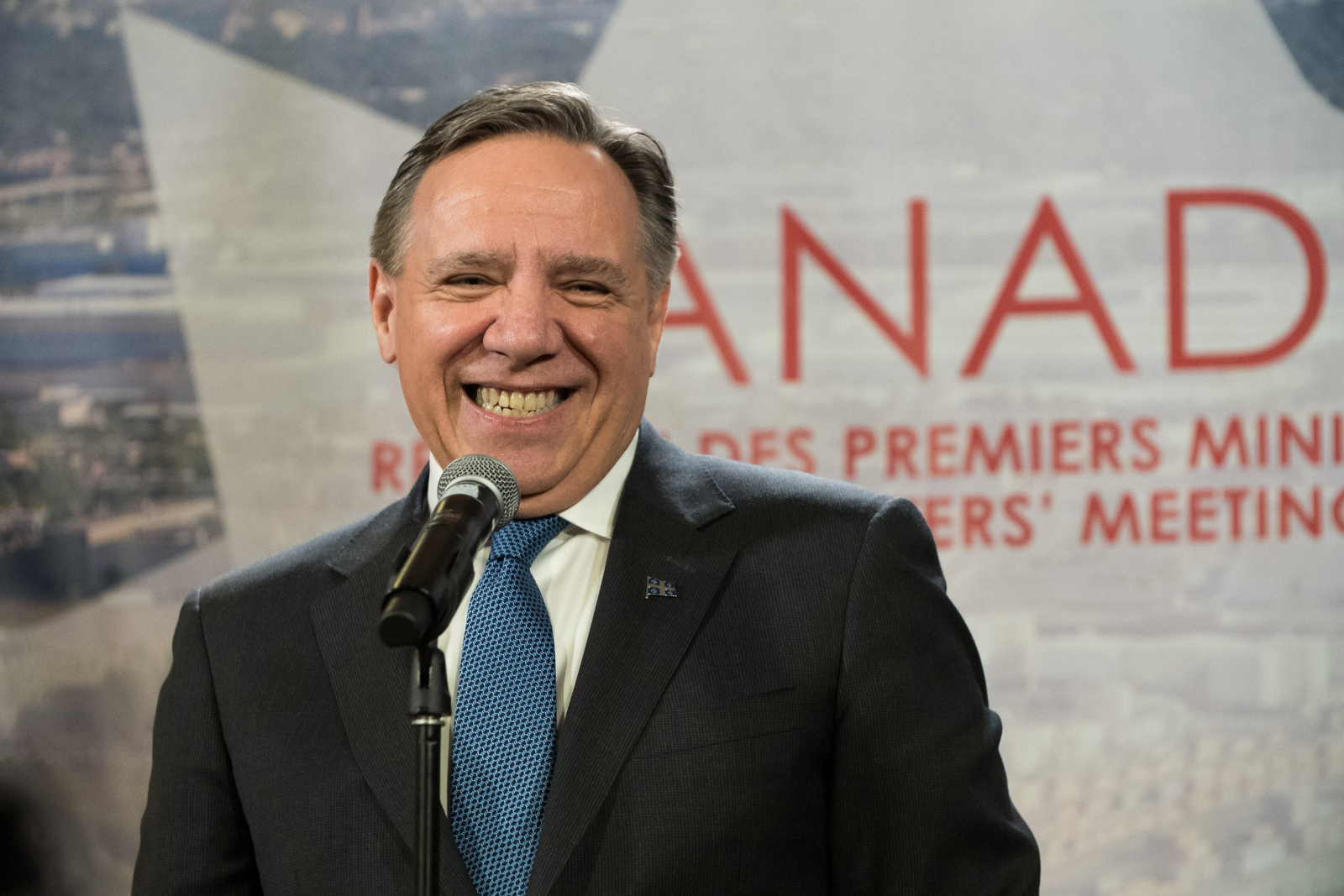 Under de Blasio’s plan to tackle climate change, unveiled Monday, all city operations would run on 100 per cent “zero-emission Canadian hydropower” within five years. Negotiations would begin “right away” with the aim of signing a deal by the end of 2020.

The mayor’s plan to source clean power from Canada is exactly the sort of thing that Quebec's right-leaning Coalition Avenir Québec government has been hoping for. Legault’s‏ strategy is to become the "battery of the American northeast” by replacing U.S. fossil fuel power generation with zero-emission energy generated by Hydro-Québec.

The provincial utility has been undergoing a "significant build-out" since the early 2000s, according to a representative, adding massive amounts of surplus capacity totalling over 5000 megawatts, including the Romaine complex on the north shore of the St. Lawrence with four hydro dams averaging an annual output of 8.0 terawatt hours (TWh).

“WOW! The Mayor of New York announces the relaunch of negotiations with Hydro-Québec,” Legault tweeted Monday. Quebec’s official office in New York also wrote in tweet that “we are excited that the city is looking to clean hydropower from Quebec to help meet its goals.”

When it comes to beating climate change, the Trump administration is late to the fight. In fact...they may not show up at all.

New York City’s #GreenNewDeal is the audacious, bold and difficult plan our city needs to lead when Washington won’t. It’s time to get to work. pic.twitter.com/w5ayjMgLwm

Quebec will need to take advantage of new electric infrastructure, like several proposed high-voltage transmission lines, if it wants to export all the surplus power it is generating, as the lines the province currently uses are close to capacity during peak consumption hours.

The utility has offered financing totalling roughly $40 million for a proposed 9.45 TWh transmission line to Massachusetts. But another proposed line to New York City would bring 8.3 TWh into the city's electric region, and is getting renewed attention thanks to de Blasio's announcement.

"We are looking forward to sitting down with members of Mayor de Blasio’s team in the near future to negotiate contract terms," said Hydro-Québec strategic communications advisor Lynn St. Laurent in an email to National Observer. "Many items need to be addressed. Long-term contracts take time to negotiate."

St. Laurent said Hydro-Québec considered de Blasio's timeline of a deal by 2020 to be "feasible" and "negotiations should begin shortly." The utility sees the upcoming steps as "very positive," she said. "Hydro-Québec welcomes Mayor de Blasio’s commitment to pursuing a formal procurement and we are looking forward to discussions with the City of New York."

The plan by de Blasio, who is rumoured to be considering a U.S. presidential run in 2020, would create clean economy jobs and cut the city’s carbon pollution. By using the Green New Deal title, he is referencing an international movement to tie job growth with climate action that has been recently championed by many environment groups, particularly youth-based.

South of the border, U.S. Representative Alexandria Ocasio-Cortez brought the idea to the mainstream, where it has been embraced by several Democratic presidential hopefuls including Senators Elizabeth Warren, Kamala Harris and Bernie Sanders.

Quebec Energy and Natural Resources Minister Jonatan Julien has predicted such a contract with New York would bring tens of billions of dollars in revenue for Hydro-Québec, the Journal de Québec reported on Tuesday.

Julien welcomed the announcement in a statement, saying the decision by New York City "demonstrates the undeniable attractiveness of Quebec's renewable and clean electricity to our neighbours in terms of reducing their carbon footprint."

The Champlain Hudson Power Express (CHPE), the proposed transmission line to the Big Apple, would have a "cumulative market value of $19.9 billion in the first 30 years of operation" according to a 2017 analysis commissioned by the proponent.

It would also "reduce CO2 emissions attributed to the State of New York by over 100 million metric tons," the analysis stated.

Albany-based Transmission Developers Inc. (TDI) has been looking to lock down contracts so it can sell capacity on the CHPE line in order to help finance the project. It would run two cables underground, and underwater through Lake Champlain and along the Hudson and other rivers. While it was previously delayed over route changes, construction is now expected to start next year, National Observer has reported.

TDI and the Blackstone Group, the Manhattan investment firm that is providing equity funding, said in a joint statement reacting to the mayor’s announcement that the CHPE was "fully permitted" and "ready to supply New York with 1,000 MW of clean, renewable power."

"We look forward to working with the city and state during the formal procurement process and to being a part of New York's cleaner, greener future," the companies said, adding the project “will create jobs, improve local air quality and more than double the amount of carbon-free power in New York City's energy supply."

Spokesman John Lacey said the firms would not be commenting further beyond their statement.

Ontario has not expressed energy needs

Hydro-Québec has had a proposal in front of the New York Power Authority since 2017 that would deliver a large amount of power, 5.8 to 8.3 terawatt hours per year, over new or expanded interconnections. CHPE is one example of how this could be done, the utility has said.

The $600-million project was criticized by Legault while running for premier. However on Tuesday, Julien, the provincial energy minister, said Apuiat would be the next Hydro-Québec project, and that it "will take place" as soon as the surpluses begin to be drawn down.

Legault has also pitched his power export plan to Ontario Premier Doug Ford. The Quebec premier said in November that he had offered to sell hydroelectricity to Ontario at cheaper rates than it would cost for Ontario to refurbish its aging fleet of nuclear reactors.

In December at a Montreal meeting of premiers, along with Prime Minister Justin Trudeau, National Observer reported that Legault continuously brought the focus back to Quebec’s surplus of hydroelectricity.

St. Laurent said Quebec sent 6.8 TWh of energy to Ontario in 2018, and still has available transmission capacity between the Hydro-Québec system and Ontario’s. The province currently has a contract through 2023 for up to two TWh annually.

But Ontario isn't asking for more, she said. "For now, Ontario has not expressed any additional energy needs."

'Converting the entire state of Vermont'

New York City is currently run on electricity generated by natural gas plants, nuclear power plants, hydropower, and wind and solar from upstate, de Blasio’s plan notes. Half of its energy is generated within city limits, with the rest flowing to the city.

The high-voltage lines that currently run into the city from the north are at capacity. The city plans to “pursue an investment in new transmission to access large-scale Canadian hydropower at a competitive price.” It will have to do this in cooperation with the state, the New York Power Authority and the New York Independent System Operator, it said.

“Negotiations will begin right away, with the goal of striking a deal by the end of 2020 and powering city operations entirely with renewable sources of electricity within five years. This action is the equivalent of converting the entire state of Vermont to clean energy.”

While the state has already committed to 100 per cent clean power by 2040, the plan would also take New York City’s electricity grid to 50 per cent renewables by 2030.

De Blasio’s Green New Deal policies are contained in “OneNYC 2050.” The mayor said the plan meets the reality of climate change “head on.”

"We are confronting the same interests that created the climate crisis and deepened inequality. There's no time to waste. We're taking action now, before it's too late,” he said.

A small thing: please keep the terms for power and electricity apart. Terawatt hours are energy. Capacity is usually expressed in Watts without the hours attached. That is power. Power is like torque, energy is like a tank of gas or a battery.

Hydro-power is regarded as a

Hydro-power is regarded as a cleaner option than other sources of energy like natural gas or nuclear energy; but hydro-power has also numerous adverse negative effects on the environment.
Building dams necessitate huge amounts of material like cement and steel. Tons of material have to be removed, displaced and carried by machinery (burning mostly diesel) that pollutes the soil and the air.
Flooding of large land areas displace people and animals, release mercury in the water and methane in the atmosphere.
Building transmission corridor hydro lines through forested areas requires cutting million of trees and spreading chemicals to avoid regrowth of plants around power lines.
They are also an incredible eyesore.