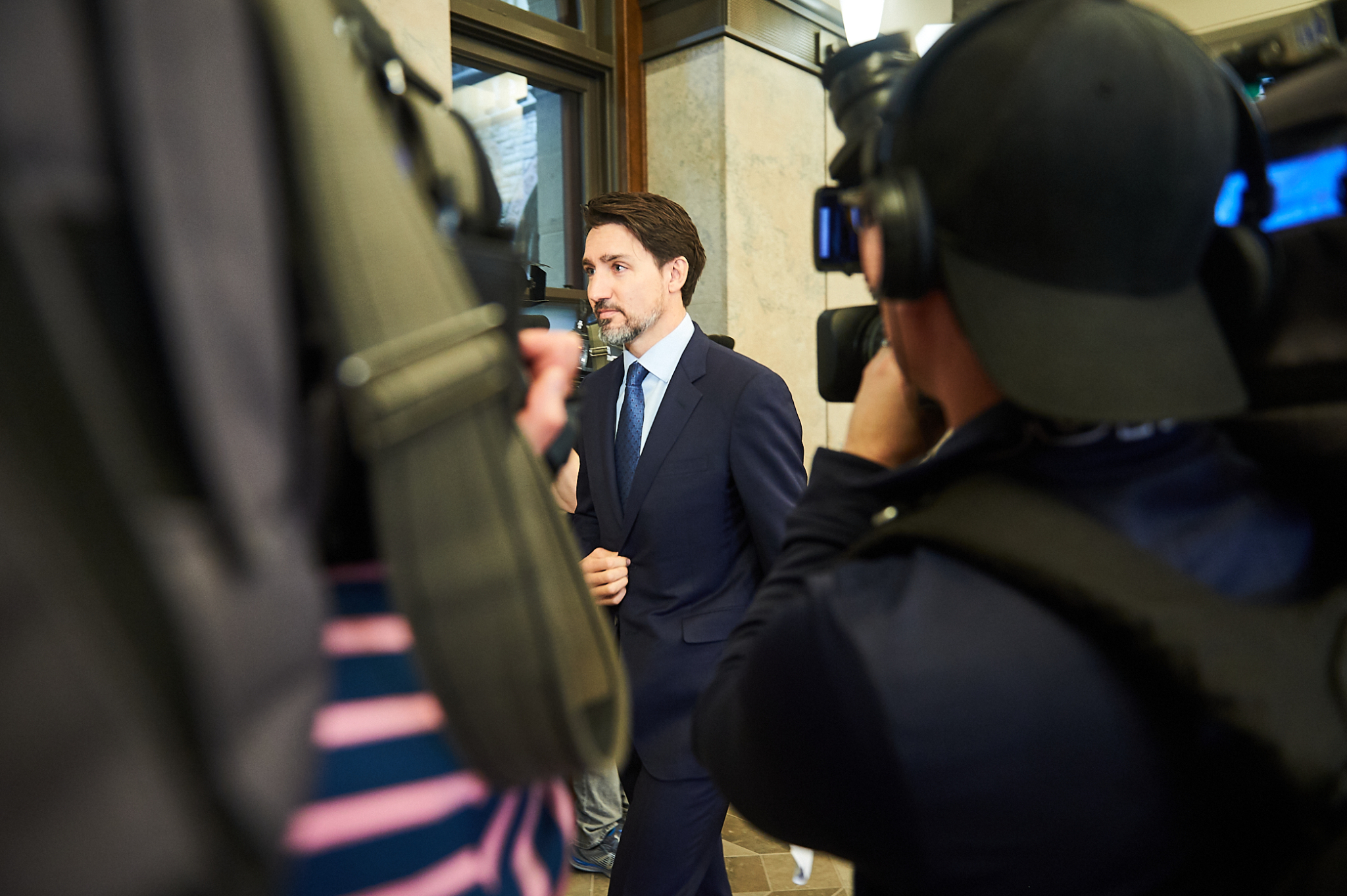 Prime Minister Justin Trudeau enters the House of Commons from a hallway in West Block on Feb. 18, 2020. Photo by Kamara Morozuk
Previous story
Next story

The Trudeau government should not use the oil-price crash and the economic downturn stemming from a public-health crisis as an excuse to back away from environmental commitments in the upcoming federal budget, warned a coalition of civil society leaders.

Speaking on Parliament Hill on Tuesday, representatives from Indigenous, labour, social justice and other organizations said now was not the time for Canada to shy away from tackling the climate emergency.

Instead, Ottawa should move forward with ending fossil fuel subsidies, strengthening carbon pricing, raising taxes on top earners and directing the windfall into retraining oil and gas workers for low-carbon-economy jobs, they said.

“We know, in these times of uncertainty, there can be a temptation to double down on the status quo,” said Catherine Abreu, executive director of Climate Action Network Canada.

“And we’re saying that, rather than doing that, Canada must actually take this moment to figure out what a new vision for Canada looks like — a vision that addresses the climate crisis, and other economic challenges, while giving communities the investment and tools they need to decide what this transformation looks like for them.”

'Canadians also told us that climate is a huge priority'

Prime Minister Justin Trudeau came out of his government’s re-election in October 2019 convinced that Canadians had sent a “clear message” that they want parliamentarians to fight climate change. In December, the Liberals committed to setting a target of net-zero carbon pollution by 2050, planting two billion trees and protecting more land and oceans.

But this year has so far been punctuated by a series of high-pressure scenarios — from the passenger plane full of Canadians that was shot down in Iran, to rail blockades provoked by RCMP action on Indigenous land, to a decision by Teck Resources to walk away from a giant proposed oilsands mine — that has kept Trudeau and his government busy.

Ottawa has not laid out a precise plan for how it will achieve net-zero by 2050; in fact, it still cannot say precisely how it will achieve its more pressing 2030 target of roughly 511 megatonnes of carbon pollution equivalent. Teck hinted at this lack of clarity when it announced it was abandoning the Frontier mine.

Environment and Climate Change Minister Jonathan Wilkinson said Tuesday he still expected the upcoming budget will feature commitments to combat the climate emergency, while also responding to Canadians’ concerns around the oil shock and the virus.

“My view would be that, while we need to be prudent and we need, definitely, to respond to some of the concerns and the impacts that Canadians are feeling, Canadians also told us that climate is a huge priority. That will be reflected when we see the budget,” Wilkinson told reporters in West Block.

After Bay Street’s tumultuous ride on Monday, which saw the Toronto Stock Exchange temporarily halted after it fell by the most since Black Monday in 1987, Finance Minister Bill Morneau said he was “looking at how we can make sure that we are appropriately dealing with those challenges” faced by the tourism and energy sectors in particular.

“In a world moving away from fossil fuels, we should not be using limited government resources to prop up rich corporations, or pay those same companies to pollute less, or not pollute at all,” Levin said.

“We should instead invest in retraining oil and gas workers, funding community-driven renewable-energy projects and creating social supports for all of those impacted by the transition away from fossil fuels.”

Canada promised more than a decade ago to phase out non-tax “inefficient fossil fuel subsidies” by 2025, but the government’s progress on this front has been hard to measure. Last year, the independent environment commissioner criticized the government for not conducting a rigorous enough assessment and making its criteria far too broad.

A November report from Levin’s organization estimated that the government was handing over $600 million in direct subsidies, $3 billion in non-tax spending and at least $1 billion in tariff exemptions all to the industry, not to mention support for specific projects, such as $1.6 billion for the Trans Mountain oil pipeline.

“It is likely that this federal budget will contain ongoing and additional subsidies to oil and gas companies. In a climate emergency, this shows a lack of leadership,” Levin said.

He called for increasing taxes on top incomes and strengthening the carbon-tax framework for large emitters, and floated the idea of applying taxes to carbon-intensive imports.

The ‘concrete steps’ to a green budget

Abreu said there were “concrete steps” the budget could take, including borrowing ideas from the European Union’s Green Deal, that she said can help stimulate renewable-energy and energy-efficiency programs.

The government should also take the opportunity to provide retraining in carbon-intensive jobs, said Ken Bondy, national representative of Unifor, the largest private-sector union in Canada.

Last year, the Trudeau government began efforts to transition workers in the coal industry in Canada, as it moves to phase out coal-fired power plants nationwide by 2030.

That model could be extended to oil and gas workers, added Karri Munn-Venn, senior policy analyst at Citizens for Public Justice. The groundwork has been laid already, she said.

"There’s real lessons that now need to be expanded to oil and gas, as well,” Munn-Venn said.

Ottawa can also lead by example, said Julee Sanderson, first national vice-president at the Canadian Union of Postal Workers. The postal union, she noted, has developed a “community power” plan that envisions “climate-friendly delivery,” postal banking and other pollution-cutting measures.

“We believe that the postal system can help drive transition with its vast infrastructure,” Sanderson said. Canada Post, with the largest public fleet of vehicles, has committed to buying hybrid vehicles — but it could go further, and commit to electric cars, she said.

“Carbon markets will not act at the speed we need,” Bacigal said.

“They will further enable the legacy of dispossession, privatization, violence against Indigenous women and girls and two-spirit people and destruction of Indigenous lands and cultures.”

It would be ridiculous for

It would be ridiculous for the Federal Government to provide ANY bailout money to the Alberta government or to Alberta corporations, just because there is a downturn in the economy of that province. Besides the fact that the economic problems of Alberta are a direct result of the decades of neglect and lack of creativity by a series of Conservative governments, it is also of EXTREME importance that it be taken into account that Alberta has NO provincial sales tax. This has been a historic choice taken by successive Social Credit and Conservative governments, a choice to forego significant revenue that all other provinces in Canada chose to collect and use. Any financial support from the federal government to Alberta should ONLY be looked at AFTER the Alberta government implements a provincial sales tax to increase its own financial inputs. Otherwise, it would be a slap in the face to every other citizen of Canada who has paid provincial sales tax throughout their entire life.