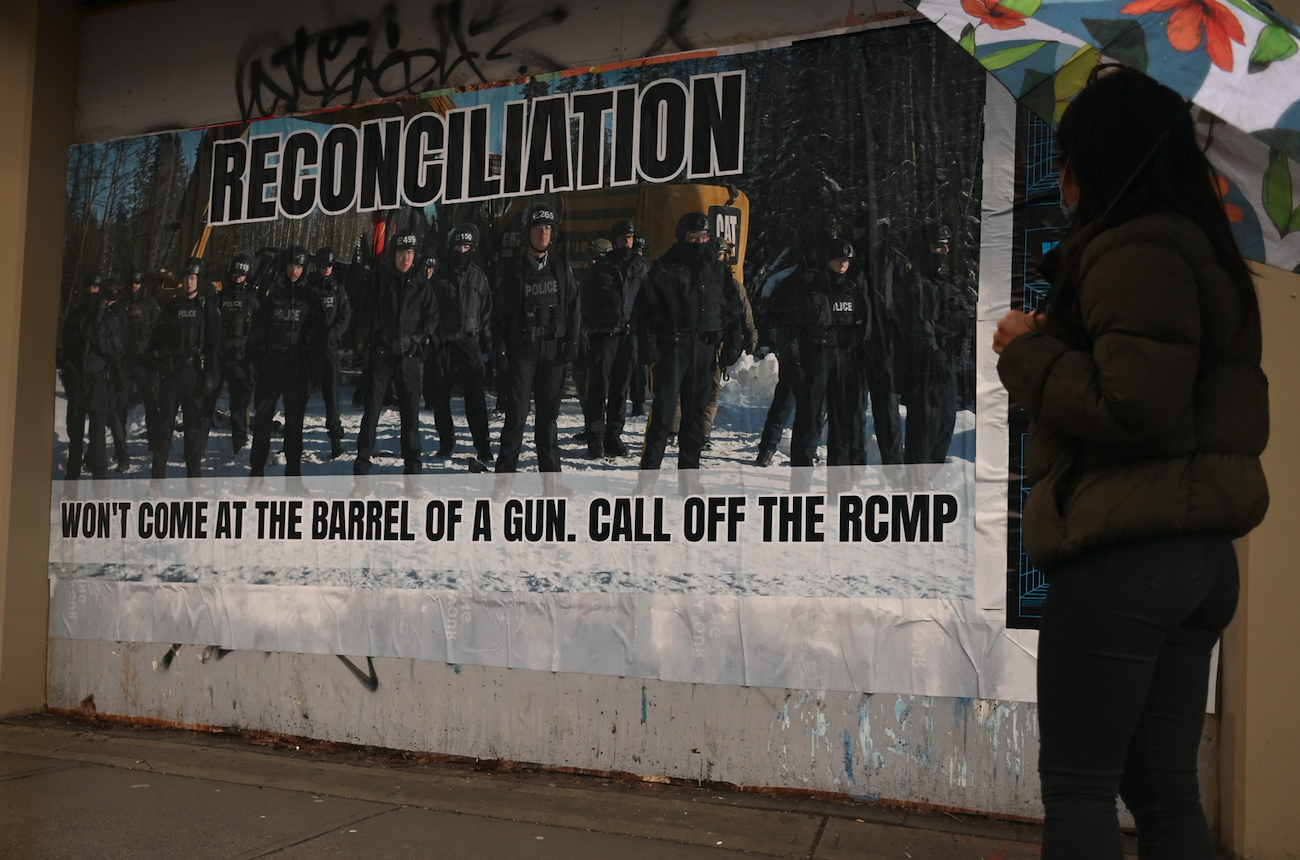 Pressure continues to mount against the Coastal GasLink pipeline in Interior B.C., as posters appeared in Vancouver Thursday highlighting the violation of Indigenous rights and the impacts of climate change. Photo by Owen Berry
Previous story
Next story

Pressure continues to mount against the Coastal GasLink pipeline in Interior B.C., as posters appeared in Vancouver on Thursday highlighting the violation of Indigenous rights and the impacts of climate change.

The first poster, put up at the intersection of Main and Union, shows armed RCMP agents with the text: “Reconciliation won’t come at the barrel of a gun. Call off the RCMP.”

The posters, put up by allies of the Gidimt’en clan, are being used to call attention to the construction of the Coastal GasLink pipeline, designed to supply LNG Canada’s Kitimat facility with fracked methane from the Dawson Creek area of B.C. The project runs through the unceded territory of the Wet’suwet’en Nation and has been met with resistance from the nation’s hereditary leadership who hold authority over traditional territories.

At the intersection of Hastings and Nanaimo, the second poster looks like a postcard, welcoming you to “Beautiful British Columbia,” with photos of the floods and fires that devastated the province last year.

In 2020, Wet’suwet’en hereditary chiefs issued an eviction order to the company that remains in effect, and in November last year, one of the nation’s five clans, the Gidimt’en, enforced the eviction order by blocking roads to the construction site. RCMP agents then descended on the area to enforce a court injunction issued to prevent interference with the pipeline’s construction.

Dozens of land defenders and two journalists were arrested during the raids that followed. Several of those arrested have alleged mistreatment at the hands of the RCMP, including being made to strip to their underwear, denied clothing before going to court and being transported in enclosures roughly the size of a dog kennel.

Last week, land defenders said they “executed a strategic retreat” from an occupied drill site in anticipation of another RCMP raid.

“Our warriors are not here to be arrested. Our warriors are here to protect the land and the water and will continue to do so at all costs,” Sleydo’ (Molly Wickham), a wing chief of the Cas Yikh people and spokesperson for the Gidimt’en Checkpoint, said in a statement.

The hereditary chiefs’ fight to defend Wet’suwet’en territory is not expected to slow any time soon. Beyond land defenders on the ground slowing construction, hereditary Chief Woos is taking the fight to Coastal GasLink shareholders.

“Reconciliation won’t come at the barrel of a gun. Call off the RCMP” reads one of the posters put up in Vancouver calling attention to the #CoastalGasLink crisis.

Hundreds of academics have also signed an open letter calling for the RCMP to stand down. The letter also calls for a ban on fossil fuel expansion.

Adaptation and disaster response are keys to building resilience

Can this problem not be

Can this problem not be solved with intelligent negotiation? How can we tolerate police armed with automatic rifles (machine guns?) and military dress arresting women who are PROTESTING? These people are not armed robbers holed up in a bank branch. This is wrong, wrong.... wrong and the government of British Columbia is wrong, wrong.... wrong to allow such activities to continue. History has taught us that this will probably lead to armed conflict and possibly the death of someone and for what .......... natural gas? Really?

Wouldn't be the first time

Wouldn't be the first time there was bloodshed over natural gas (let alone oil, where from the late 20th century onward it's more a matter of finding the wars that DIDN'T have oil as a component somewhere). Honestly, one good thing about decarbonization will be the demise of petropolitics.

One could argue that a small

One could argue that a small group of people holding up a building project is "wrong, wrong, wrong", and funnily enough, the courts would agree.
This dispute is totally mischaracterized as a whole people vs. a pipeline. The truth is that this protest is staged by a tiny minority, with dubious legitimacy. This post from a year ago puts it in much better context (and one might wonder why BC's feminists have been so silent on this issue - intimidated by green activists maybe?):
ROY BRANDER | a year ago
The sources [for this assertion] would be the Globe and Mail for the original Feb 2019 story:
https://www.theglobeandmail.com/business/article-wetsuweten-chiefs-remov...

Thanks Adam Ball for a very

Thanks Adam Ball for a very illuminating comment!
My question for the The National Observer - why don't you find someone who can investigate and write a full disclosure pro and con article on the issues raised here? There are many, many important principles vying for priority (as noted by Adam Ball). Give us the full and accurate context. It would make very informative, intelligent journalism and really help inform your readers. This piece is simply one-sided advocacy journalism which only appeals to those already converted. Let's lay it all out for your readers in an honest, open fashion and let us decide.... One reason I (hopefully) subscribed to the Observer...

The links referred to above

The links referred to above have been removed from the websites. Much older articles are still up, so presumably there were other reasons for removing them.
I guess from the standpoint of our western system, the issue isn't whether "we" can understand the process, but what the Supreme Court of Canada (SCO) ruled. That is the western law.
The western law was not upheld in the western process of authorizing the project, or gaining the consent of the peoples along the route. A lower court (the various orders sought by TMX and CGL around the various injunctions) cannot extinguish the ruling of the SCO.
Beyond that, the RCMP were also out-of-bounds in their behaviour, in most of it contrary to a SCO ruling on the same issues, in eastern Canada.
What *is* clear is that the signatures the pipeline companies got, were of chiefs empowered under The Indian Act, not by the traditional chiefs, including those of the Wetsuwet'en Nation.
The BC government and the federal government have known for roughly 25 years that those weren't the people with authority, as decided by the top "western" court in Canada. They were told to negotiate, and the nature of negotiation and outcomes the SCO expected, and failed to do so.
Frankly, neither Horgan's government nor Trudeau's government had any business authorizing any aspect of those licenses or approvals. They didn't have authority: they needed to negotiate in good faith with the leadership under the traditional system, and simply didn't.

In addition neither of the two challenged pipeline companies have, throughout their "operations" been in compliance with the conditions attached to the authorizations from the provincial or the federal authorities. Neither federal nor provincial authorities have enforced compliance.

That "we understand" elections is neither here nor there. Neither can we say we understand, except in the context of how we believe elections are supposed to be held -- even though in our own system it's not nearly as cut-and-dried as many, maybe even most of us, believe.

However, to advance understanding, the hereditary title decision, the authority of elected chiefs, etc. is described here, including setting out who pursued the Supreme Court of Ontario decision determining that hereditary law applied, along with the limitations of authority of the elected chiefs:
https://www.firstpeopleslaw.com/public-education/blog/the-wetsuweten-abo...
Here is some journalism that clarifies the matter, which has in some right-wing sites indeed been (erroneously) characterized as a bunch of aggressive men bullying women and getting away with it.

Here is a CTV report from last winter:
https://www.ctvnews.ca/canada/wet-suwet-en-what-s-the-difference-between...
And one from CBC, with maps of the area and territorial breakdowns through which the CGL project passes, dealing with the "Matrlineal Coalition" as well.
https://www.cbc.ca/news/canada/british-columbia/wetsuweten-whos-who-guid...

Here's one that speaks to other aspects of the Wetsuweten Nation with the western governments and the resource extraction companies:
https://www.aljazeera.com/news/2020/3/1/understanding-the-wetsuweten-str...

Here's a piece setting out some of the colonial, ecological, and legal history of the goings on in the general area:
http://www.firstnationsdrum.com/2020/03/the-delgamuukw-decision-putting-...
(My father took us, as children, to visit the abandonned village of Hagwilget, and there was home-movies footage of it which has unfortunately been lost).

Here's the webpage of the Office of the Wetsuwet'en, a non-profit whose Board of Directors are the Wetsuwet'en Chiefs, setting out how the clans and houses are related, and the difference beween their matrilineal organization, and who the hereditary leaders are.
https://www.wetsuweten.com/office/

You'll note that some of the members of the "Matrilineal Coalition" actually work at that office. It would seem they don't accept the division attributed to the struggle.

Hope this helps sort out the confusion.

It took me a couple of

It took me a couple of minutes to find the links Adam Ball referred to. Here they are:
https://www.theglobeandmail.com/business/article-wetsuweten-chiefs-remov...
https://biv.com/article/2020/11/female-hereditary-chiefs-challenge-wetsu...
I will have a look at the links you have provided, thanks.

When the courts decide

When the courts decide impartially rather than defending the corporate side, possibly we could have reconciliation. Police eagerly defending CGL yet no-one holding CGL to account for all their environmental inflations. Disgusting to watch RCMP, hiding behind a log, training a scoped sniper rifle at unarmed protestors. Stand strong Wet'suwet'en warriors, defending your territory against profit pigs bent on destroying our lands, waters and wildlife. Some people want you to fit into their mould, not understanding your culture or form of government. They criticize your way of governance based on ignorant observations or cow-tailing to their masters. Continue to......TELL THE TRUTH......BE THE CHANGE.......EVERY CHILD MATTERS.