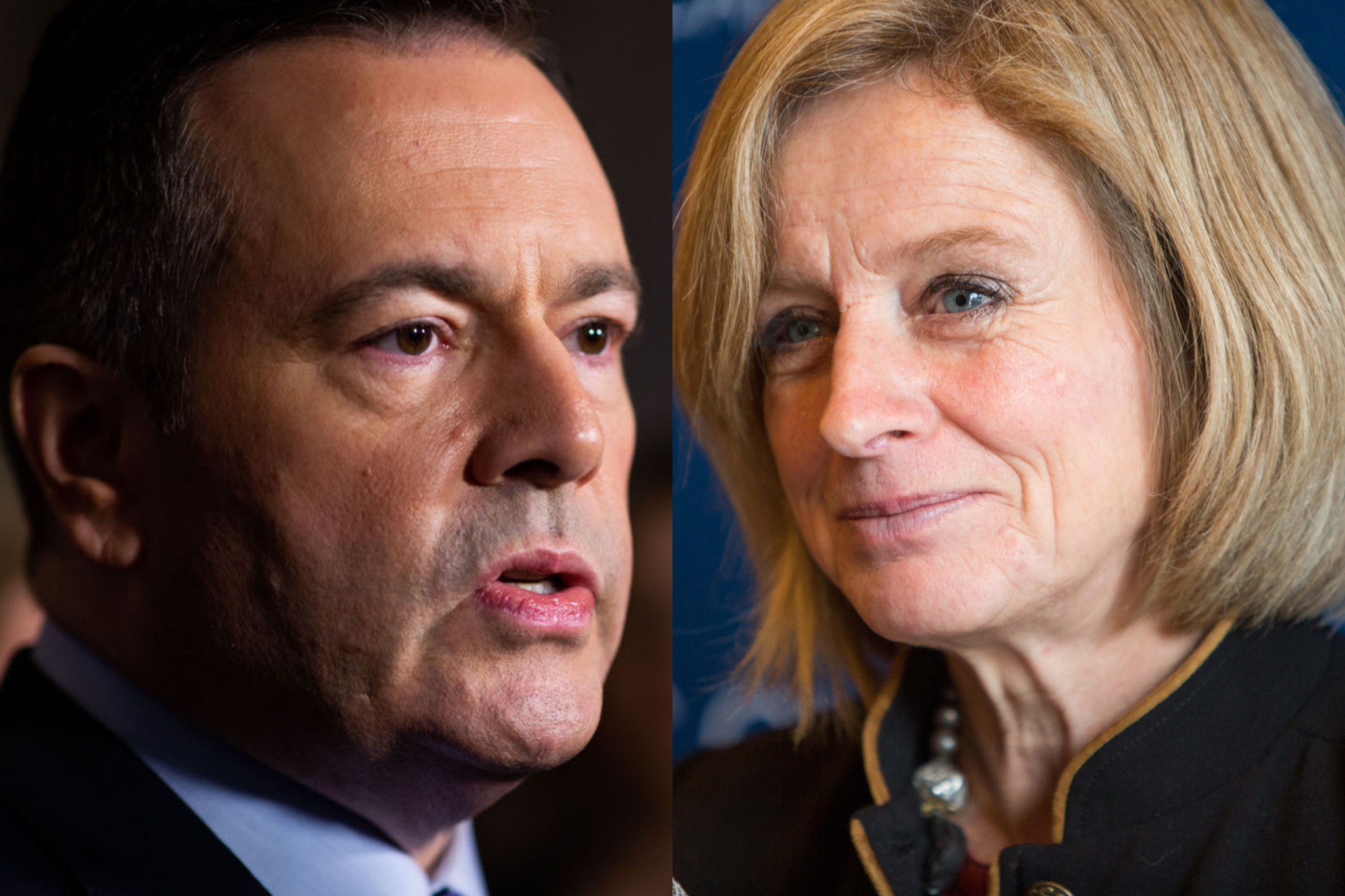 Jason Kenney's UCP appears to be rising from the dead, which is bad news for Rachel Notley's NDP. Photos by Alex Tétreault
Previous story
Next story

In Alberta politics, you can never count out the Conservatives.

Despite leading a government that bungled the management of COVID-19 more badly than almost anyone else in North America, made a failed $1-billion bet on the Keystone XL pipeline, and foolishly embraced an anti-democracy convoy marbled with violence and racism, Jason Kenney’s UCP is now polling ahead of the Opposition NDP. And while Kenney himself may not lead the party into the next election in May 2023, it should be clear by now the UCP will have a puncher’s chance at getting re-elected.

As the Toronto Star reported, the most recent poll from Janet Brown, a reputable independent pollster in Alberta, has the UCP winning 47 seats to the NDP’s 40, a significant improvement on her November 2021 poll that had the UCP taking just 35. Even two months ago, this didn’t seem plausible. A January 2022 poll from Angus Reid had the NDP ahead of the UCP by 11 points, as its quarterly polls had consistently shown since March 2021.

So how did the UCP rise from the dead? Oil prices, of course.

The party’s 2022 budget, which includes a projected surplus that would have been unfathomable even last fall, is premised on oil prices averaging $70. But oil prices are much higher than that right now and look set to surge even higher as Russia’s oil exports fall off the market.

Pierre Andurand, a veteran oil trader and market watcher, suggested they could go as high as $200 a barrel in 2022, while Amrita Sen, the founding partner and chief oil analyst at Energy Aspects, thinks $170 to $180 is in the cards. “We have never tested what the price would need to be [to destroy demand],” she said.

For the Alberta NDP, this would be an unqualified disaster. That’s because it would give the UCP an unprecedented windfall right when it needs to win back skeptical voters. As Finance Minister Travis Toews said recently, “The higher energy prices go and the more oilsands projects that move from each pre- to post-payout, the more sensitive the Alberta government royalty revenues become, relative to WTI prices.”

In 2021, each $1 change in the price of oil meant approximately $230 million more in Alberta’s treasury. But in 2022, because of those changes in the tax status of oilsands projects, it moves to $500 million.

If oil averages $100 a barrel for fiscal 2022, a figure that looks increasingly conservative, that will give the UCP $15 billion to play with. If it averages $120 a barrel, it will mean $25 billion. And while the party could theoretically use that to fund health care and education, it’s far more likely the UPC will try to find a way to put it directly into the pockets of Alberta voters. A one-time prosperity bonus of $1,000 for every man, woman and child in the province, for example, would cost just over $4 billion.

Would that be a crass act of political cynicism? Yes. Would it be effective? Also yes.

So far, at least, Rachel Notley's NDP doesn’t seem to sense the political danger associated with this tsunami of cash that could be headed its way. Last week, the NDP announced its intention to introduce a bill that would “invite all Albertans to invest directly in the growth of Alberta’s tech and AI sectors.” Encouraging people to invest in something as risky as venture capital seems more on brand for the UCP than the NDP, and it’s not obvious how this would put more than a tiny handful of votes into their column, if any.

The lack of urgency in both the NDP’s messaging and strategic thinking, on the other hand, is abundantly clear — and worrying if you’re someone who doesn’t want to see the UCP get re-elected.

Yes, it’s possible the UCP leadership vote on April 9 will lead to a fracture in the party that pits Kenney against Brian Jean and potentially splits the party into two. But that’s the political equivalent of buying a lottery ticket and hoping it can pay your mortgage. The NDP can’t afford to count on it and will almost certainly end up paying a high price if it does.

There’s still time for the party to craft a coherent message and communicate it to voters. The gusher of cash coming from the oil industry can just as easily be used to fund new schools, better infrastructure and a renewed relationship with Alberta’s nurses and doctors.

The NDP should make the argument it’s better equipped to spend and save those billions than the UCP, and that the money should be used to diversify the province away from fossil fuels instead of doubling down on them. But the longer the NDP waits to make those arguments, the less likely they are to resonate with voters.

If the NDP waits too long, it could easily cost the party an election it looked like they couldn’t lose.

Fawcett: "The NDP should make

Fawcett: "The NDP should make the argument … that the money should be used to diversify the province away from fossil fuels instead of doubling down on them."

Political poison in Alberta. No small thanks to Rachel Notley. She committed herself, her party, and progressive voters irrevocably to Alberta's petroleum sector.
For four years, the pipeline queen did her level best to alienate climate activists, environmentalists, and even moderate progressives who accept the science, support strong climate action, and called for a fair deal on royalties. All of whom the UCP brands as "eco-terrorists" -- public enemy number one.

Notley: ""Here in Alberta we ride horses, not unicorns, and I invite pipeline opponents to saddle up on something that is real."

Premier Notley heaped scorn on federal NDP leader Jagmeet Singh over Trans Mtn:
"To forget that and to throw [working people] under the bus as collateral damage in pursuit of some other high level policy objective is a recipe for failure and it's also very elitist."
"To do that and forget the needs of working people, or to throw working people under the bus, means that both economic growth and environmental protection are bound to fail."

Premier Notley on the UofA's decision to award David Suzuki an honorary degree: "Speaking personally as an alumni (sic), I'm not a big fan of this decision. It struck me as being a bit tone deaf."
"If I'd been on the senate, I wouldn't have personally voted for it."

Notley on Jane Fonda's visit in 2017: "Super tone-deaf."
Cheryl Oates, Communications Director for the Premier: "We have been clear that when it comes to Alberta's oilsands, Tzeporah Berman is dead wrong."

Notley's NDP relentlessly attacked environmentalists and pipeline opponents. By the end of term, she endorsed Vivian Krause's discredited conspiracy theories:
"'I'm frustrated by it, of course,' Notley says of the [anti-oilsands] campaign. 'Vivian Krause (the B.C. researcher) and people like her have done a good job of really laying bare the details of this and really showing us the degree to which this had been going on and building over time.'"

The pre-2015 AB NDP was a force for good in opposition. The only voice of sanity on climate and energy. Rachel Notley eliminated that option.

Notley steamrolled over the concerns of B.C. First Nations opposed to her pipelines.
Ignored the health concerns of AB First Nations in the oilsands region.
Deceived Albertans about fraudulent oilsands emissions caps and climate change plans that don't reduce emissions.

Now we have zero oil industry critics in the AB Legislature. Banished to opposition benches, the shrivelled NDP caucus can say nothing about oilsands expansion, oil & gas pollution, and climate inaction — because they shilled for Big Oil in office. On pipelines and oilsands expansion, Notley and Kenney are on the same page.
We no longer have a mainstream party that champions science.
We no longer have a progressive party in the NDP.
The AB NDP took away our last hope for real action on climate in AB.

I fear you're right. This

I fear you're right. This collection of comments is revealing and totally discouraging; particularly the ones about David Suzuki and Tzeporah Berman, which she didn't really have to weigh in on, and was straight-up con level nasty.
I have always thought that both her and Shannon Phillips smiled too much, which projected an embarrassingly stupid cheerleader for the guys vibe; we all know what the players want to do to the cheerleaders. Over the years that HAS waned somewhat with Rachel while Shannon's expression is now a more understandable although disturbing rictus, so I've hoped that they may have changed in light of just how truly horrible conservatives have become, and how much clearer the threat of climate change now is. Admitting that change in attitude would take them out of the standard BS political style though, showing true leadership, but that's unfortunately probably too much to hope for and we'll be left with the usual lesser of two evils. Which the NDP still are.