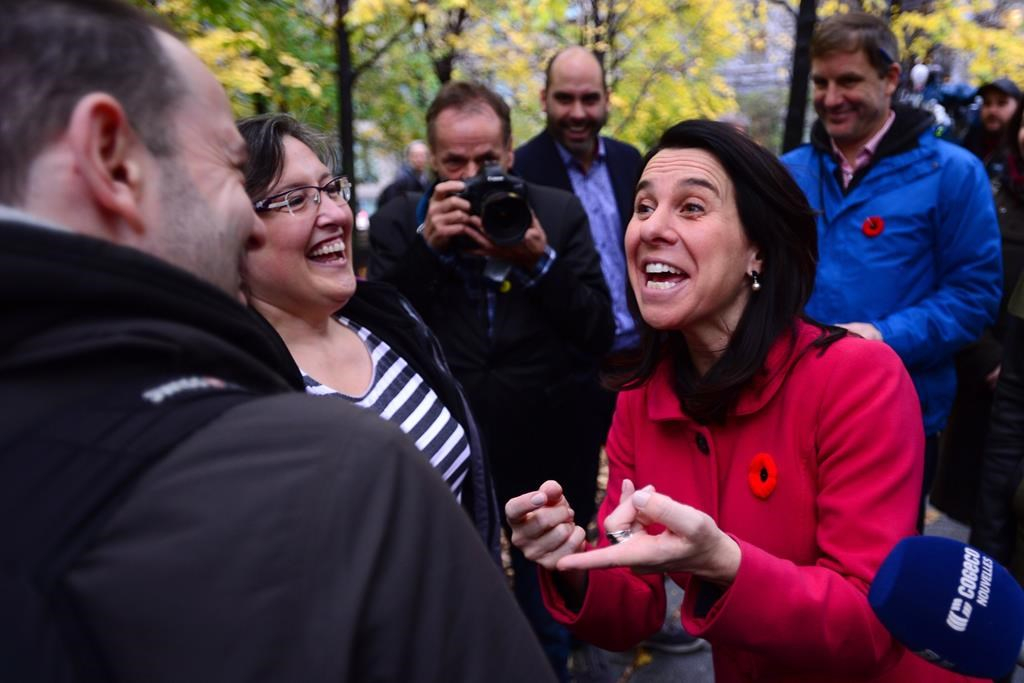 Montreal Mayor-elect Valérie Plante gets congratulated as she hits the streets on Nov. 6, 2017 following her historic victory. Photo by The Canadian Press
Previous story
Next story

Pulling off the greatest political upset the City of Montreal has seen in a long time, she managed to beat the powerful voting machine of incumbent mayor Denis Coderre and coast to a resounding victory. What should have been a cakewalk for the latter, ended with him being the first Montreal mayor in 60 years to be denied a second term, and with Plante becoming the first woman to be elected mayor in the city's 375-year history.

Does Plante owe part of her victory to the sweeping influence of the #MeToo movement and an overwhelming desire by voters to disassociate from the Old Boys’ network and an era of arrogant men steamrolling through what they wanted? Without a doubt.

There has been general disgust and anger with the recent sexual assault allegations involving prominent Quebec figures such as former Just for Laughs president Gilbert Rozon and talk show host Éric Salvail. Those, in turn, were triggered by a wave of similar allegations sweeping Hollywood and a Trump presidency that has triggered a rise in hate speech and misogyny.

There were certainly no such allegations of inappropriate behaviour against Coderre. But he was caught up as collateral damage in a tide of anger. Many Montrealers punished the former federal cabinet minister to dismantle an old system.

Coderre brought on his own downfall with arrogance, a lack of transparency, and a type of “Father knows Best” condescending attitude that led him to steamroll ideas through, even when Montrealers told him clearly that they were not even vaguely interested in them.

It was the kind of take-charge attitude that may have worked wonders in previous eras, but in today’s climate — coupled with a series of fiascos (the pit bull ban, the Formula E disaster, the rodeo, speaking to the police chief about a journalist, Patrick Lagacé, who was later spied on, the $25,000 that went undeclared) that haunted his last few months and slowly chipped away at public trust — it only served to feed the public desire for change.

'Plante has an effortless way of being herself'

Quebec’s economy is doing extremely well right now. Montreal has a renewed sense of pride (thanks in part to Coderre’s over-the-top 375th anniversary celebrations, one must admit) and there’s a sense of hope and openness that led Montrealers to look for someone to embody that.

As strong as the #MeToo momentum was, however, it would be a mistake to attribute Plante’s win solely to a desire to put male bombast in its place. To do that would be to severely underestimate Plante.

Dubbed a neophyte by many (sexism continuing to rear its ugly head, since Plante has as much municipal political experience as many former mayors had when they were first elected into office), Plante went from a virtual unknown to most Montrealers only a few months ago, to being elected as the city’s first ever female mayor in its 375th history. It’s no small feat, and it’s not the first time she’s beaten seasoned frontrunners as an underdog.

She did the exact same thing in 2013 when she surprised everyone by winning her party’s leadership against the much more established Louise Harel, a former Parti Québécois cabinet minister. Plante has a real gift for getting people to rally behind her and for her.

There is no denying her gregarious, affable, always smiling persona. When you meet her, she is a very hard person to dislike.

The mother of two young boys, 43-year-old Plante is someone many urban dwellers can easily relate to. She runs marathons in the city, takes the metro, uses her bike to get around, and seems to be in touch with the average taxpayer who wants to see his or her money go towards improving city services instead of flashy projects that may or may not “put Montreal on the map,” as Coderre has often boasted about.

Plante has an effortless way of just being herself. She smiles non-stop, laughs way too loudly, and isn’t afraid to just be silly when the moment calls for it.

Unlike the suited-up dour male politicians we’re so often used to seeing, Plante remained true to her nature, and proved the naysayers, who advised women to be more “like the boys” in order to get a seat at the table, that women can fight in the political arena with their own style, their own approach, their own vision, and find that there will be voters who will hungrily respond to that.

But, despite many (mostly male) pundits implying that this was a race between style over substance, Plante proved that she had both the grace and the gumption to kick down doors never opened before and move the city in a new direction.

Plante and her team ran a near pitch-perfect campaign. Their message was positive, smart and forward-thinking, and they used social media brilliantly to present it.

Projet Montreal’s message of diversity, gender parity, public transit, urban renewal and citizens’ needs first resonated with so many voters that they now hold a majority on city council. It was a well-deserved victory for a hard-working candidate who took absolutely nothing for granted and was campaigning and shaking hands with people up until the very last minute. Montrealers saw that and appreciated her drive, her earnestness to win them over, and are hoping that will translate to a mayor who will work hard for them too in office.

In sharp contrast, Denis Coderre immediately announced his departure from municipal politics after his defeat, leaving the Équipe Denis Coderre team in the official opposition without… Denis Coderre. It’s one more strike against a man who many claimed was in it for the ego boost, and one more point for Plante who had openly stated that she would stay on to serve Montrealers, regardless of yesterday’s election results.

In a joyous, often-emotional, and gracious acceptance speech last night, Plante acknowledged the historic moment and told the packed room of supporters that she was humbled and proud to be Montreal’s first female mayor. She then immediately told the audience that “her whole career has been about building bridges” and quickly launched an appeal to the city’s francophone, anglophone, and allophone communities to work together.

It’s a “rassembleur” tone the former community activist is known for and has served her well in the past.

Yes, Plante benefitted from anti-Coderre sentiment and from the many arrogant mistakes that her incumbent made. Yes, she benefited from a strong feminist movement that stems back earlier this year to the Women’s March and a mounting desire to see more women in politics representing other interests and promoting other visions, and by the more recent #MeToo movement. It should be noted that the number of female candidates soared from 33 per cent in 2009, to 43 per cent this year. From 294 candidates that ran in this year’s elections, 127 of them were women. As a result, a record number of female borough mayors and borough and city councillors were elected last night in and around the island of Montreal.

But, ultimately, Plante used that momentum to thrust herself forward in the most competent and capable way. She may have been “the right woman at the right time” as the Montreal Gazette's Allison Hanes put it, but at the end of the day she defied the safe, “don’t rock the boat” conclusions of all three Montreal daily newspapers, The Gazette, Le Devoir, and La Presse, who publicly endorsed Coderre and proved the old way of doing things may be dead.

Plante defied the cynics that said time and time again that Coderre “knows how things work” and those who grudgingly counseled Montrealers to vote for the incumbent anyway, despite his questionable record.

While Coderre may have often boasted about putting the city on the map, it looks like Montrealers decided to put it there, after all, on Nov. 5.

Thanks for this great analysis and for giving so much insight on how this historic event happened. Very exciting.

Very interesting. Wouldn't it be wonderful if white male certainty started to crumble, and new faces and voices could be heard in public office? There is so much real work to do....and for sure....for ordinary citizens, the flashy events, or big expenditures for one off builds, don't add up.

Big celebrations are nice....but they don't have to cost billions. Art is wonderful, it can be local and community chosen. There are so many alternatives to the centralized, global money machine that the main stream media still endorses....and women are often more familiar with those alternatives.

National day car for example. That's a good investment according to studies I've read. But for the past 30 years male politicians haven't thought so, except in Quebec.

More women like Plante in charge and that too could change.

Thank you so much for commenting, Mary. It seems there are a lot more women winning prominent victories in politics.

Exciting news from my home

Exciting news from my home town. Plante will have many challenges ahead and it seems she will have the supporters and allies she will need to deal with them. Great article, lots of issues to think about. I look forward to ongoing coverage of Montreal municipal issues in this context in the years ahead. Thanks!

Thank you so much for your feedback about the story, Susan!