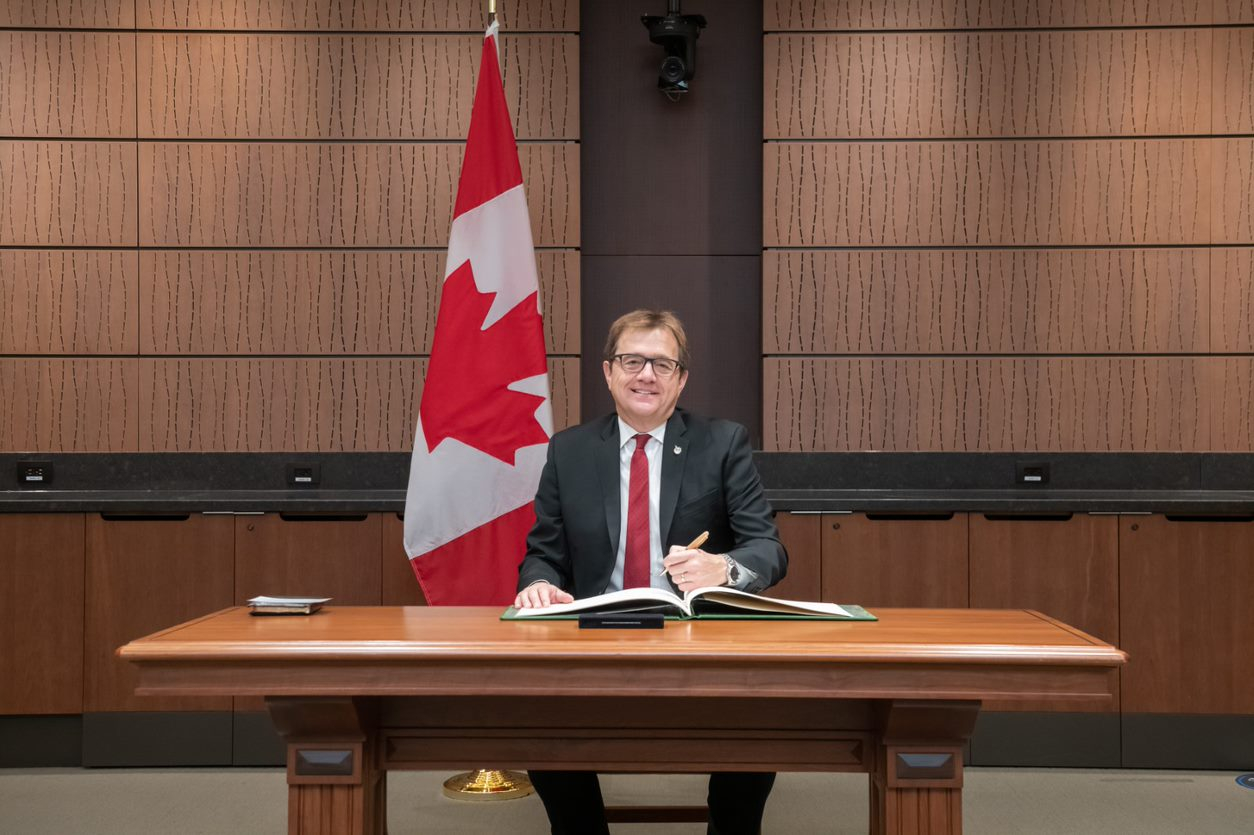 Jonathan Wilkinson at the cabinet swearing-in ceremony on Oct. 26 where he was appointed minister of natural resources. Photo courtesy of Jonathan Wilkinson’s office
Previous story
Next story

Canada’s National Observer asked Jonathan Wilkinson how he will approach his new role as natural resources minister after serving as environment and climate change minister from 2019 to 2021.

What do you see as the primary goal of your new role as minister of natural resources, building industry or reducing carbon emissions?

I would say, both. As you know, I was previously minister of environment and climate change, and I played a role in developing Canada's strengthened climate plan. That plan focused very much on both reducing emissions in line with what science tells us we must, but also on thinking creatively about how we ensure that we have a strong economy on a go-forward basis, one that will thrive in a low-carbon universe. Environment Canada is largely a regulatory agency, and Natural Resources Canada is really an economic ministry. And so, what I see my role as is furthering the work on bringing forward the economic transition, working with companies in all sectors relating to natural resources to ensure that we are actually making the changes that will allow us to reduce emissions, but also to grow the economy and create jobs.

How do you plan on building trust with the Prairie provinces, given your history as environment minister, now that you've been appointed to natural resources?

I worked pretty hard when I was environment minister to have constructive relations with all provinces and territories. And I certainly did have good conversations with my counterparts in Alberta and Saskatchewan. In fact, I worked quite actively with [Environment and Parks Minister] Jason Nixon in Alberta. And, I think he would also say, I think we had a very constructive relationship. We didn't always agree, but we certainly worked to ensure that we were advancing the interests of Albertans and Canadians. I intend to do the same thing going forward in this portfolio. And I certainly will be talking with my provincial and territorial counterparts, including some of their provincial representatives that may be at COP26 in Glasgow, (Scotland). But I certainly see my role as working constructively with all provinces and territories, understanding that, first and foremost, we have to make reductions in emissions that are in line with what the science tells us. We must, but we’ve got to do that in a creative way.

Before coming into politics, I spent many years running and working in clean-technology companies. I do think that there's a real opportunity here for us to work together to ensure that the regional economies across this country, including in the Prairies, are strong. I also should mention that I grew up in Saskatchewan, I worked for the Province of Saskatchewan for a number of years, and my family lives in Saskatchewan and Alberta, so I do feel very close to the concerns and the aspirations of folks who live in those provinces.

Will you push for green hydrogen production, as opposed to blue and grey? And if so, how do you plan to do that?

I think people often get lost in the colors associated with hydrogen. I used to run a hydrogen company, so I'm pretty familiar with the area and I'm pretty familiar with the technologies. What we should be talking about is the carbon intensity of the hydrogen. I don't think anybody's talking about grey hydrogen anymore, because what grey hydrogen connotes is that there are significant carbon emissions associated with the hydrogens being produced. But there are pathways to ensure that you are significantly reducing the carbon intensity of hydrogen that's derived from natural gas. Ultimately, you need to get close to zero, but there are technologies now that offer the promise of 95 per cent reduction in carbon. So, I'm a supporter of green hydrogen. I'm a supporter, I guess, of blue hydrogen. I'm supportive of low-carbon intensity hydrogen, and that's where the focus of the conversation should be.

In your new role, would you commit to no more pipelines?

@JonathanWNV says reducing emissions and building the economy are his main goals as natural resources minister. There's an opportunity "to ensure that the regional economies across this country, including in the Prairies, are strong."

Look, we're going to be moving through a transition with respect to energy that's going to happen over the coming decades. And clearly, we've made a commitment that we are going to be ensuring there are reductions in the emissions that come from the oil and gas sector in this country, just as there have to be in all sectors. As you will know, one of the campaign platform pledges that we made was that we would cap oil and gas emissions and we would require five year binding reductions. That is something that we will be working on, [Environment and Climate Change] Minister [Steven] Guilbeault and myself, to ensure that's put in place in a thoughtful way. To reduce emissions, there's only two levers that you can pull: one is to improve the intensity of carbon that is associated with the production, and the second is to reduce production. And certainly, as we move forward to deploy electric vehicles, for example, and electric vehicle infrastructure, which is about essentially switching away from oil, which is a transportation fuel primarily, that obviously will have impact. But let's be clear, this is going to happen over the coming decades, we need to make sure that we hit our 2030 target and we're on a pathway to 2050. But this is something that's going to happen over time.

How feasible is carbon capture technology right now, and more importantly, how much of Canada's emissions reductions targets will depend on that technology?

Carbon capture is certainly a technology that works. It's been implemented in a number of different places. The issue is, I think, that it needs to continue to move down the cost curve such that the economics of carbon capture and sequestration will make sense on a broader scale. And certainly, there are lots of companies in this country that are working to do just that. I think if you look at any of the conversations in the international environment, including the International Energy Agency, they will tell you that carbon capture has to be part of the solution to getting to net-zero. But I would also say that carbon capture and sequestration is only one element, one tool in a much broader set of tools, including renewable energy technologies and hydrogen and a range of other things and nature-based solutions that will enable us to make the reductions we are. So, it's going to be a piece of the puzzle, particularly for very hard to abate sectors, such as cement, it may be part of the solution for some of those sectors, but it is one amongst many.

There have been calls for the federal government to implement just transition legislation within the first 100 days of Parliament. What is your response to folks calling for this sort of quick implementation?

The work on just transition has been ongoing and it is a priority for me and for a number of others in the cabinet. I do think it's important that we are clear about what we mean by just transition, because I do think that sometimes, many Canadians are not fully clear on what is intended when you use those words. What it really means is, it's about economic diversification in regions where there will be some impacts associated with a transition in terms of energy. It's about supporting workers and training… And the legislation will be one piece of that broader puzzle. There will obviously have to be programming, some of which is already in place with respect to skills training and with respect to diversification, like the low-carbon fuels fund that we put into place a year or so ago, and we will be bringing forward that sort of broader perspective on the just transition. But it will certainly include legislation. It's a priority, but... I can't tell you exactly when we're going to deliver it into Parliament.