Report unpacks toxic partisanship, other barriers standing in the way of climate progress 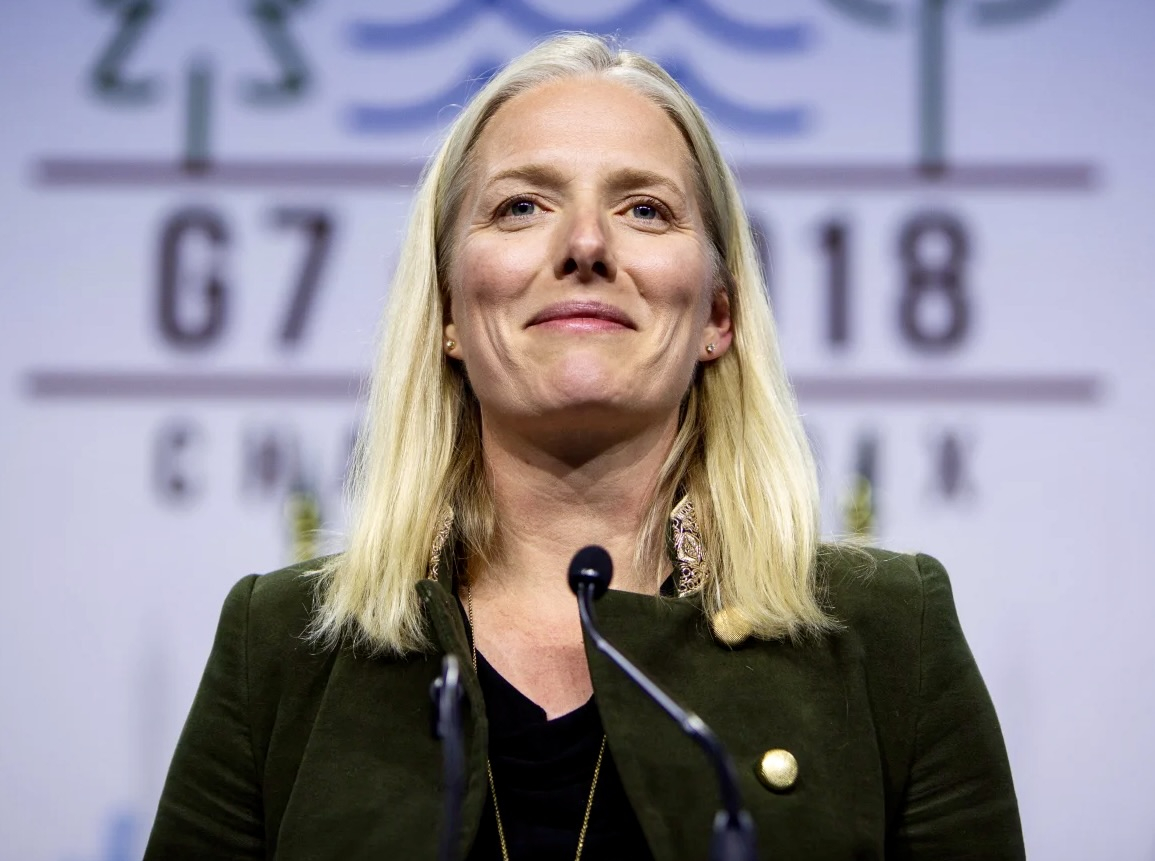 Catherine McKenna and Elizabeth May talk about some of the barriers to making environmental progress in the House after a GreenPAC report identifies key barriers. File photo by Alex Tétreault
Previous story

Canadian environmental leaders in Parliament face three key barriers to progress at the federal level, according to a new report released just over a week after the United Nations warned the politicization of climate change is a significant hurdle in North America.

“We know that most Canadians want to see climate action,” former Liberal cabinet minister Catherine McKenna told Canada’s National Observer. “But if you listen to the House of Commons on any day at question period where climate happens to be a topic or if you go to a committee, it's this over-partisanship where everyone's trying to score points … we just don’t have time for this.”

Interviews were conducted with 18 current and former MPs from six provinces and four parties — Conservative, Liberal, NDP and Green — who were endorsed by GreenPAC as environmental leaders in the 2015 and 2019 federal elections. Their responses were anonymized for the study, but Canada’s National Observer spoke to two GreenPAC-endorsed MPs — McKenna and Green Party parliamentary leader Elizabeth May — about the report.

“The role of political parties, spin doctors and strategists in controlling what their MPs do has increased dramatically over the last number of decades,” said May. Early in her career, there was more collaboration between parties, she said, but things have shifted.

Now, “the opposition parties just want to make life hell for the government,” she said. “That's their whole thing.”

Party discipline can force MPs to vote along party lines even if strategists’ decisions on policy don’t actually line up with their party platform, instead of sticking to their party’s commitment and figuring out how to work together, said May.

According to the report, MPs described how “party discipline is enforced through the leader’s control over privileges, resources and appointments to coveted positions,” noting this was present in all parties except for the Greens, the only federal party that does not whip votes.

Two of Canada's federal environmental leaders — @ElizabethMay and @cathmckenna — weigh in on a new @GreenPACdotca report that looks at the biggest barriers to making progress on climate and environmental issues in Parliament. #cdnpoli

This stringent party discipline results in environmental bills being shot down despite widespread support and can prevent MPs from holding their own party leaders accountable.

McKenna doesn’t think it's possible to eradicate partisanship from politics until the Conservatives “actually decide that they're going to be serious about climate policy.”

“The reality is, we have one party that stands in the way of taking serious climate action,” said McKenna. “I know members of that party beyond (Michael) Chong supported a price on pollution. It is a Conservative tool, but they weren't allowed to say that.”

The problem doesn’t end with party discipline and the muzzling of MPs who back a carbon price, said McKenna.

When parties peddle disinformation and lies and mislead Canadians about climate change and policies like carbon pricing, “we are, again, fighting a narrative,” she said. “How do you fight misinformation — by Conservative politicians often, but also by right-wing media?”

The spread of misinformation is especially evident as politicians and fossil fuel lobby groups leverage the war in Ukraine to sow fear over global oil and gas supply and prices, said McKenna.

These barriers hindered the work of GreenPAC’s environmental leaders, but they were still able to make progress, the report noted.

Half of the interviewees said their greatest environmental victories came through private member’s bills, even though these bills generally fail to become law.

A bill to address environmental racism amassed the support of all parties except the Conservatives and made it almost all the way through the House before dying on the order paper when last year’s election was called. May recently tabled an identical bill and is hopeful it will pass with support from all the parties.

Even bills that never make it to debate can mobilize Canadians to write MPs and “get people talking in the other caucuses and say, ‘This is a good idea, maybe we should do something about it,’” Cannings told Canada’s National Observer in December.

But most victories reported by MPs were project-specific, such as retrofitting a community building, and not systems-oriented, the report found.

“The reality is, the only way we are going to get the change we need is by having massive system change,” said McKenna, who left politics to focus on scaling climate and nature solutions. “But it's hard because if you're an individual MP, how do you get systems change?”

The report also found very few interviewees mentioned collaborating with Indigenous peoples, which McKenna said is “a reflection of how things are in Canada” and a “real loss” because not only are outcomes better with collaboration, it is a requirement for reconciliation.

“In terms of looking at systemic problems in the way our electoral system is structured, nothing comes close to first past the post as a structural barrier to environmental leadership,” said May. “(It’s) because they know they can construct a majority government with one riding at a time. Winner takes all.”

May pointed to New Zealand’s switch from the first-past-the-post voting system to mixed member proportional representation in 1993 and the collaboration and co-operation that arose from the change.

McKenna says environmental leaders and governments also need to do a better job of reaching regular Canadians, educating them on complex climate issues, from electric vehicle policies to the carbon price, and using their input to help make policy decisions.

She says this “would put pressure on politicians because at the end of the day, you would have regular Canadians saying, ‘This is what we believe is important.’

“Climate change is an existential issue that we need to get absolutely laser-like focused on. And we are running out of time, and fooling around, delaying, fighting is a waste of time,” she said.

“At the end of the day, if you care about your kids or future generations, then that's what this is also about.”

Under ALL the pressing,

Under ALL the pressing, existential circumstances why on earth are neither May or McKenna even mentioning uniting the left? Why can't they even SAY out loud that the CPC and the PPC (with only a hair between them when we recall how close Bernier came to winning leadership) are THE problem here. There was a facebook meme at one point that said, "conservatives are going to kill us all" that wasn't wrong. The trucker convoy embodied the nasty, proud boy rogueness now running the party.
However, the left wing's steadfast denial of and even offering the other cheek to such a clearly malevolent and dangerous enemy is oddly similar to the utter intransigence of the right wing more generally when it comes to basic reason. Liberals are nicer, kinder people for the most part, the words themselves tell the tale, "liberal" means open and generous, "conservative" withholding and tight-fisted, more closed. So nice people naturally shrink from confrontation and conflict, it's survival stuff and personality; it can be seen as our more feminine side. But conservatives have become "cons" with blaring horns and waving flags motivated mainly by wanting to just f* over or f* with that particular human/humane element. Oppositional defiant disorder toward the nurturing element, the collaborative element. New Zealand stands as an example of where we collectively need to go. It's our only hope, to bring on the female side.
So proportional representation is clearly the only way to do that and change the system; we ARE running out of time, but the narcissism of small differences continues stupidly among parties on the left. Mind you, it has been put to a vote provincially and lost, but still, THESE TWO women should at least be talking about that in this interview. They're always so super careful while even the idling of massive diesel engines drowns them out.

This would be a comment I largely agreed with if I thought Liberals could plausibly be described as "left wing". They are not left wing. Heck, the NDP are barely left wing. If you want to talk about "uniting the left with the centre" then fine, talk about it, but don't pretend it is something it isn't or that the Liberals are something they aren't.
I certainly agree that proportional representation is a Good Thing that would be helpful in general and in our current troubles in particular.

Why are we taking lessons

Why are we taking lessons from former Liberal Catherine McKenna, whose party has really done dick all in terms of emissions reductions, whose party is currently entertaining the proposed Bay du Nord carbon bomb?

I don't buy this. Sure, toxic partisanship is no doubt annoying, and MPs spend a lot of time experiencing it so it looms large in their minds. But the Conservatives don't have enough seats to stop the Liberals from passing a bill unless the Bloc or NDP decide to stop it. And I've seen no indication that the Bloc or NDP would block any serious climate bill the Liberals put forward. So they could pass stuff if they wanted to; the Cons could toxically scream as much as they felt like but could not actually stop bills from being passed that the parliamentary majority was serious about passing.

The problem is simple: The Liberals listen to lobbyists with money too much, so they don't put forward many serious bills on climate change. Plus they don't reform the way many ministries operate to get them to prioritize climate change over oil and gas interests; there's no "toxic partisanship" that can stop them from doing that, but they never seem to do it.